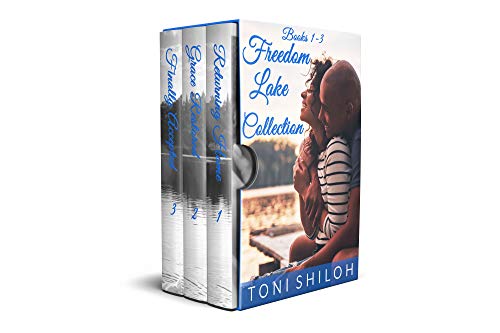 Returning Home (Book 1)
Jo Ellen Baker is shocked to find out that the boy who teased her mercilessly throughout high school, has returned to their hometown of Freedom Lake, and he’s missing a leg. When his mother asks her to renovate their carriage house to give him a place to gain his independence back, she wants to say no. But one look at him brings a rush of forgotten feelings.

Evan Carter can’t believe he has to return home and live with his parents. Every hope and dream he ever had dissipated in a car crash that cost him his leg. Stuck in a wheelchair, he’s forced to reexamine his relationship with God and the local carpenter, Jo Ellen Baker.

Will renovating his home open the door for a mended relationship, or are some wounds too deep to heal from?

Grace Restored (Book 2)
Michelle Thomas has it all. Beautiful and successful, she’s just opened her own law firm in Freedom Lake. What more could she want? When her old flame rolls back into Freedom Lake, she’s intent on ignoring him. But how can she give the widower and his precious twin girls the cold shoulder?

Still reeling from the death of his wife, Guy Pierre returns to Freedom Lake to take over as town sheriff and raise his twin daughters. Alone. Yet, life keeps throwing Michelle in his path and sparks of interest began to rise.

Will old secrets tear them apart again or can they find the faith to let God’s grace restore what has been broken?

Finally Accepted (Book 3)
There’s only one thing Chloe Smith has ever wanted: family. Yet the DNA results she’s received have thrown her life into a tailspin. Her utmost desire has ended up being the catalyst for shaking her faith. She doesn’t even know who she is anymore, and she’s certainly too messed up for her longtime crush to give her more than a second glance.

Darryl Jones is struggling between his past and the grace God so freely offers. His sins feel too big for him to handle, let alone expect the woman of his dreams to accept. Chloe is the only woman he’s ever wanted and the one he doesn’t deserve.

As they form a tentative relationship and examine their faith, Chloe and Darryl ache to know they are finally accepted and fully loved.

53 books1,058 followers
Toni Shiloh is a wife, mom, and Christian fiction writer. Once she understood the powerful saving grace thanks to the love of Christ, she was moved to honor her Savior. She writes to bring Him glory and to learn more about His goodness.

You can see my reviews of the individual books below:

One of my favorite things about Toni Shiloh’s books is the way she writes such warm stories that also tackle tough issues. It’s not an easy balance to keep the tone friendly and relatable while also wrestling with emotional topics such as abortion, racial identity, abuse, etc. Even with heavy plot lines, the tone of the story never feels heavy itself.

(I voluntarily complimentary copies of each book in this collection.)

Jean Volk
92 reviews
February 4, 2020
I've been reading Toni Shiloh's books for a couple years now and I LOVE her writing. The characters are so real and I love how she puts God in her stories!
If you have not read any of Toni's books, please consider reading them. I promise you will not be disappointed in her writing.
Andrea Boyd
Author 20 books253 followers
February 4, 2020
This is my favorite series by Toni Shiloh! I definitely recommend adding it to your to-be-read list.
Julie G
88 reviews
September 6, 2020
Terrific!

Another excellent 3 book series. I started to binge read them but found I had to slow down and ponder. The first two were quick and the challenges the characters faced were easier for me to read about. The third book dealt with identity. In Christ, within a family and in relation to the character’s perception of her DNA. So well done. Thought provoking. Not ���just” an easy romance but a story with deeply flawed characters who are learning WHO they are. More real life than a simple romance and I loved it.
Denise
861 reviews
September 6, 2020
Having read quite a bit of fiction in this stressful season, I continue to find the prefect blend of faith and romance in Toni Shiloh’s books. She doesn’t whitewash the struggle of being human or gloss over the ways we hurt even those we love the most. In each story of finding someone who loves our imperfect selves, she includes the deeper truth of the truest unconditional love and forgiveness - that of Jesus.

Best three book contemporary series I have read this entire pandemic and I have done an obscene amount of reading. Toni Shiloh is new to me. I am so happy I found her! Loved all 3 books equally. Nicely done!
Sarita
10 reviews
October 18, 2021
A wonderful lesson for love

I gave this series 5 stars because it moved me. I was so surprised that I was familiar with the scripture and that the familiarity made it comforting to me. Every character was struggling but were able to assist and comfort each other through their individual struggles with life and understanding of God's word. Love and life strengthened their faith in God and each other.
stephanie pitts
8 reviews1 follower
January 8, 2022
Have to say totally enjoyed this collection

Great life lessons that draw you closer to God as you navigate each character's life scenarios. .I feel I walked right beside them as they came to faith and begin to live out the word. I cried, prayed, cheered and anticipated as I read each chapter. Definitely engaging. Truly love this author!
Erica
3 reviews
November 12, 2021
Great Read

Loved it! Even though it is fiction, it helped me with my spiritual journey. I enjoyed journey of the characters. Each character had different journey to the same place. I enjoyed the friendships and bonds. I will definitely be looking to read more from this author.
Toni Shiloh
Author 53 books1,058 followers
Read
January 21, 2020
I hope you enjoy the Freedom Lake Collection!
Displaying 1 - 10 of 10 reviews