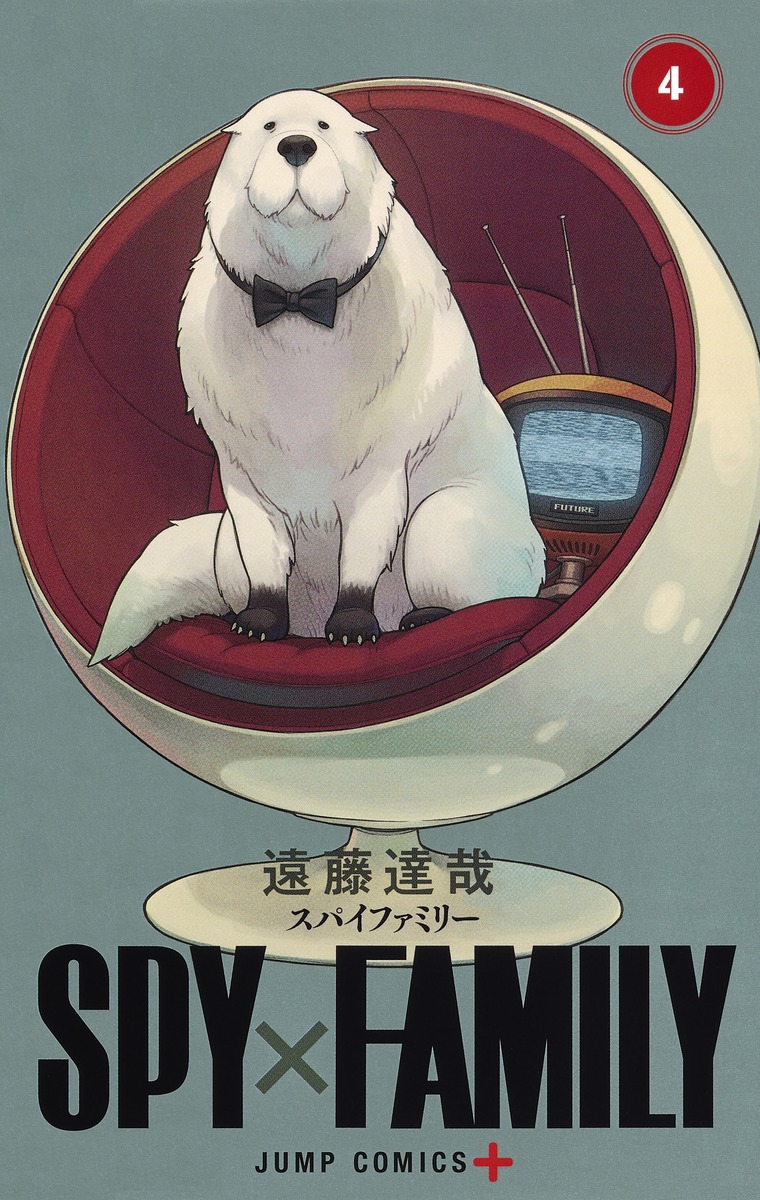 What I like about this volume is that you can see all the family members playing their parts to save the day without each other's knowing. It was full of action and espionage as compared to the previous volumes. The ending where everyone gets to reassure themselves that they are being a good spy/wife/mother/daughter for being able to catch the terrorist was precious. I am sitting on edge now as I can't wait for the truth to be revealed, and I can't imagine how powerful it will be ever then if the Forgers Family banded together.

We also finally have a new additional family member, in a form of big white fluffy fur who can foresee the future. I thought the scheme to have a dog would be of little importance and only serve as a filler to the volume but was surprised to see that we will be promised something more!

All in all, the series remains my favorite though I find this volume a bit lacking (which I'm not sure where and why). Anyhow, I can't wait to watch how the Forger family grows and gets involved in more tumultuous adventures now that Bond has joined them!
— Massiel
240 reviews1,128 followers
July 15, 2021
I'M GOING TO THROW HANDS IF THIS DOESN'T END A HAPPY ENDING. YOU BETTER PROTECT EVERYONE IN THIS MANGA ENDO!!!

I present you Bond Forger, the fourth member of Forger, a dog with precognitive abilities. 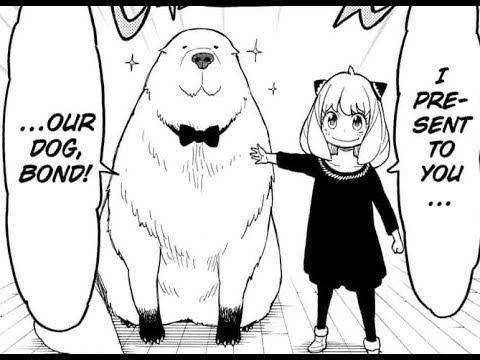 I called this book chaotic in previous review. This is getting beyond chaotic now and I am not complaining.

But if the mangaka Mr. Endo killed anybody by the end I am starting a revolt, because their missions are scaring and these people are a bunch of chaotic mess. 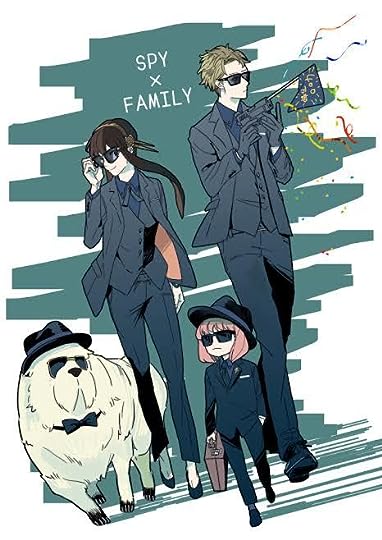 I read this at work and people kept asking me what was making me smile and laugh so much. The quote "That must be a good book" came out of several people's mouths. And they aren't wrong.

I adore this series and am so excited that I'm not caught up yet and have more volumes to consume.


Starlah
393 reviews1,600 followers
May 6, 2021
still cute and fun to read but i did feel like this volume was a little lacking. love the doggo!

Sylvie
603 reviews794 followers
July 8, 2022
I swear these comics get better and better with each volume.

I loved the newest addition to the Forger family.
I loved how Anya was much more involved in this mission.
I loved how action-packed this volume was.
I love how Yor is very protective of Anya.
I basically loved everything that happened in vol. 4!

Although, Loid needs to go on a vacation or something, that man is exhausted.

Brenda Waworga
571 reviews654 followers
May 21, 2022
They got a new family member: A DOGGOOOOO 🥹😍❤️
Nicolo
1,983 reviews114 followers
August 11, 2021
This volume was part of my manga reading vlog on YouTube, where I give more of my impressions on this book. Feel free to subscribe to my channel.

I remember reading the arc collected here serially and wasn't originally too impressed. Now, it has aged like fine wine collected in volume four.

The entirety of the storyline adding Bond the family dog is collected in this volume. Not only has our family grown, but each of them had their moment to shine as they managed to avert the renewal of hostilities between fake West Germany and faux East Germany. This is the kind of storytelling I have come to expect from this series that I've grown to enjoy so much.

I love these characters so much <33 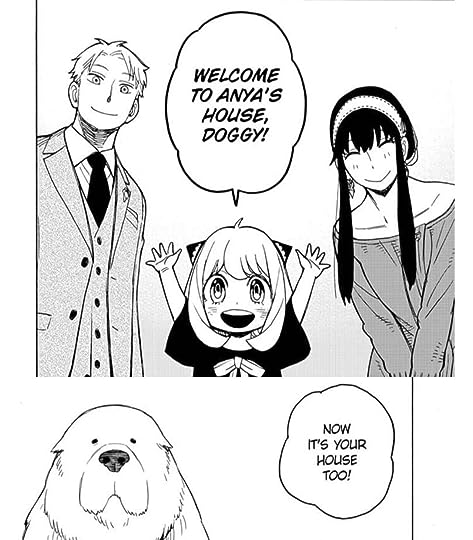 I started watching the Spy x Family anime on Friday after testing positive for COVID. I wasn't feeling that well, and I wanted to watch something fun and new — but I never expected to love the story and the characters as much as I did!

I literally bingewatched the entire anime, which is not something I usually do. I was just hooked, and after I finished the last episode I immediately started reading the manga. I started with this volume because this is where the story picks up from the anime 😄

I can't wait to read all the other volumes!! I'm sure I'm gonna love them as well hehe

Me, after volume 3: this manga series cannot POSSIBLY get even CUTER than it already is

rain
600 reviews336 followers
Read
February 20, 2021
i love a family that saves the entire world!! this arc is too precious anya and bond are my children 😭

This was super fun and very chaotic! We are introduced to a new character, a dog who has super-powers just like Anya. And as always, the family dynamics are so sweet and wholesome. Highly recommend this manga series.

DISCLAIMER-All opinions on books I’ve read and reviewed are my own, and are with no intention to offend anyone. If you feel offended by my reviews, let me know how I can fix it.

alana ☁️
322 reviews320 followers
November 6, 2022
I’d say this one is my favorite one so far! Anya and the dog are the cutest dynamic duo and made my heart just 🥹🥹
Neil (or bleed)
951 reviews730 followers
June 12, 2022
Very entertaining!
Rebecca
2,941 reviews73 followers
March 10, 2021
Before you go running to doesthedogdie.com, let me reassure those of you who were as traumatized by Where the Red Fern Grows as I was - no dogs are harmed in this volume of Spy x Family. In fact, the addition of Bond the dog drastically increases the caper level of the book with his amazing doggy powers, which not only are able to rescue children and see the future, but also increase Anya's own adorableness factor a hundredfold.

The whole volume follows the same basic storyline - a group of disaffected (and probably too cool for you) college students thinks that it would really cool to reignite tensions between east and west, and to that end plan to use dogs put on the black market after a government experiment was shut down to bomb politicians into oblivion. Twilight hears about this through work channels and heads off to take the world's longest poop (excuses are not his strong suit) while Yor and Anya stumble onto the plot while looking to adopt a dog. The dog who will become Bond bumps into Anya, who reads his mind, and the two take off to put an end to a plot that might very well kill Loid, while Yor hares off after Anya, convinced she's been kidnapped by pedophiles. The result is one of the best spy caper stories in the series thus far, with everyone coming out thinking they've saved the day.

For my money? Anya saved the day, because ultimately she's the one who saved the dog. What can I say? I like a happy ending.

Lauren
801 reviews931 followers
March 21, 2021
Not my favourite in the series so far but still a fun and throughly enjoyable read...especially beacuse of the latest addition to the Forger family <3

I say it's not my favourite in the series only because of the way the dogs were used/treated in this volume which made me a little sad and mad at times.

But this has still got to be my favourite continuing manga series at the moment! :D
Anita
97 reviews14 followers
July 23, 2022
I adore this series
Roomies' Digest
234 reviews687 followers
January 21, 2023
much love for our new addition to the fam 😭
Amanda (BookLoverAmanda)
249 reviews138 followers
August 25, 2022
OK YALL - THE DOG IS THE BEST AND I LOVED IT SO MUCHHHHH