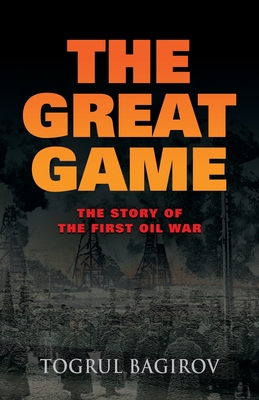 The Great Game: Story of the First Oil War

3.33
3 ratings2 reviews
Rate this book
Inspired by true historical events, The Great Game is a gripping narrative of the personal ambitions and geopolitical interests in the very first fight for oil that played out on the shores of the Caspian Sea. The struggle to control Baku's oil pitted the richest families of the time against each other - front and center are the Nobels locked in a rivalry with the Rothschilds and the Rockefellers. Darkening the plot further were the Communist revolutionaries Vladimir Lenin and Joseph Stalin.

The novel takes us on a journey where Baku is transformed into the world's oil center by the turn of the 20th century through the technological innovations and business ingenuity of the Nobel family. It offers a glimpse into the life of that period - widening economic inequality, immense personal hardships, family separations, broken promises and hearts.

Based on extensive research, The Great Game offers a captivating account of the rise of oil as the world's top strategic commodity while simultaneously drawing us into the heart of the personal stories and rivalries of the early oil barons in Baku.

3.33
3 ratings2 reviews
5 stars
1 (33%)
4 stars
0 (0%)
3 stars
1 (33%)
2 stars
1 (33%)
1 star
0 (0%)
Displaying 1 - 2 of 2 reviews
Tony
1,355 reviews70 followers
February 2, 2023
I picked this up in my quest to read a work of fiction from Azerbaijan, and while it's certainly full of interesting historical nuggets, it's not the finest of fiction. Written by an energy security expert, it's basically fanfic about the Nobel family's role in the development of the oil industry in Baku. This is seen through the eyes of Emanuel Nobel, from his 1876 arrival as a teenager until his flight from the country in 1918 as revolutionary violence swept into Baku.

As oil became the preeminent strategic resource at the dawn of the 20th century, Baku became a classic boom town, as a bevy of oil barons seized the day. As told here, the Nobel concern was far more benevolent than most -- setting up all kinds of free social services (schools, hospitals, libraries, etc.) for its workers and their families, and the Nobels enjoyed fraternal relations with their Azeri counterparts, not to mention close ties to Czar Alexander and Nicholas. (It's worth noting that no mention is made of the Armenian oil barons who controlled about 1/3 of Baku's production.) In any event, the book basically follows Emanuel Nobel through his years as he innovates, dispenses largesse to his friends and workers, falls into bed with a gorgeous British spy, and cunningly outwits his foes -- especially the hated John D. Rockefeller.

For reasons that elude me, the author plays rather fast and loose with the chronology at times, leading to some odd moments, such as Stalin leading a mob through the streets of Baku at a time when he would have been an adolescent, and so forth. Some of the characters retrain their historical names, while others are thinly veiled composites, for example one minor character who's a mix of Sidney Reilly (the "Ace of Spies") and some other figure, or the lurking brute "Ezhov" who seems to be modelled on future NKVD chief Nikolai Yezhov. Perhaps most notable is the character of Leyla Taghiyev, who is a version of the real-life Umm El-Banu Äsâdullayeva, who was a Taghiyev, but one generation later, and wrote a memoir of Baku called "Days in the Caucuses" under the pen name "Banine."

I actually wonder if that's the book that I should have read instead. For all the attempts to paint a picture of the time and place, I'm not really sure that the fictionalization of this interesting history and characters works. I kept finding myself wondering what was real and what was made up, and ultimately wished for a more straightforward history that wasn't so focused on Nobel family hagiography. Readers seeking a nonfiction book about the Nobels in Baku should seek out the 1976 book "The Russian Rockefellers: The Saga of the Nobel Family and the Russian Oil Industry."