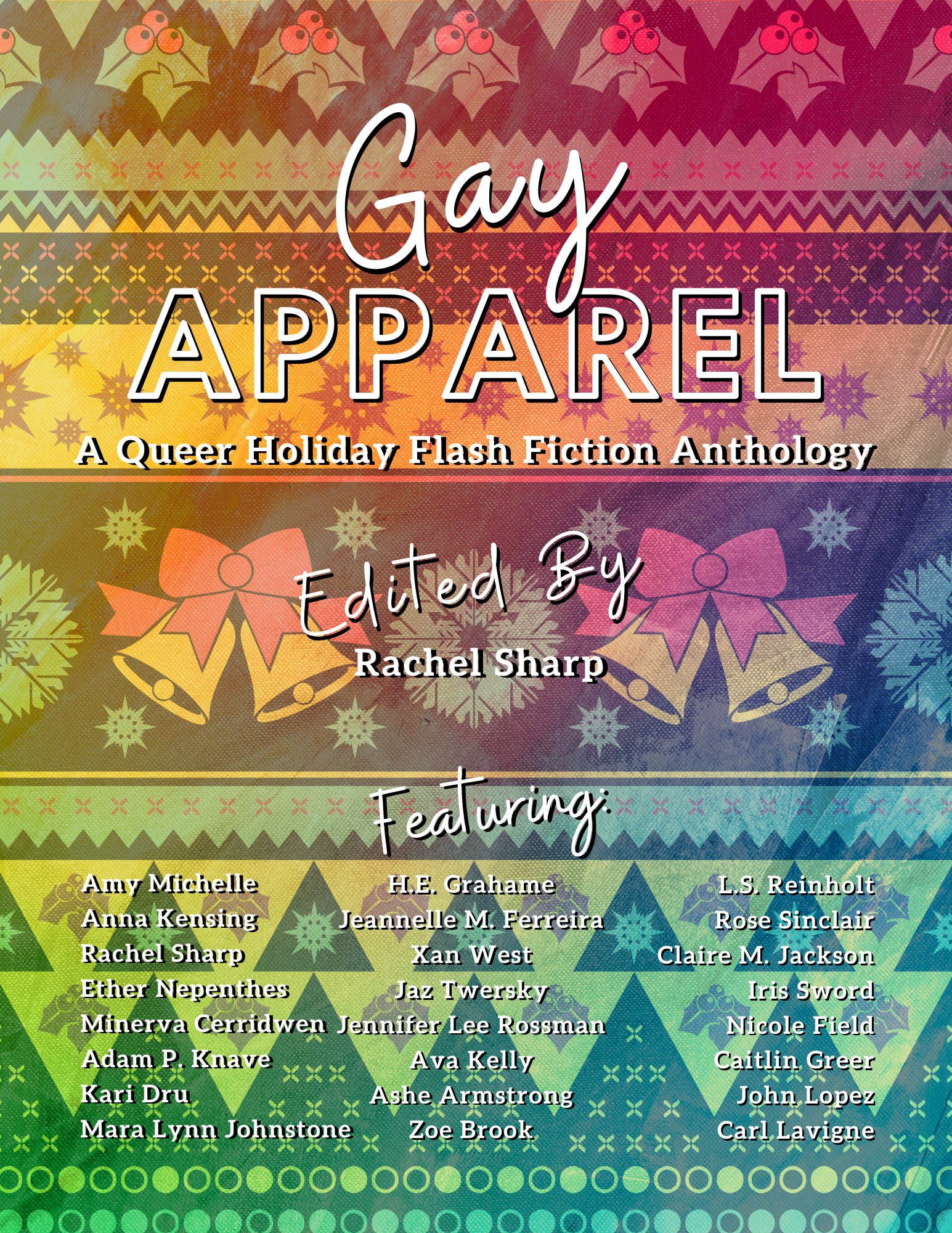 12 books56 followers
After a decade of touring the country, Rachel Sharp is hiding out in Vermont with several plants and her questionable sense of humor. At time of writing, she is working on entirely too many projects. The previous statement will be true regardless of time of reading.

She also lives with chronic illness, plays ukulele, and tries to save the planet.

You can find content warnings for my story here:
https://xanwest.wordpress.com/publica...

Each of the authors can get you a copy for a donation. You can go here to receive your copy from me.

This collection is only available from the authors, for a donation to a charity of their choice. (If a donation is difficult, many of the authors or others in the #writingcommunity would donate on your behalf.)

Like a tiny set of twinkling lights, this collection delighted me. Touches of kindness, sparks of romance, and the glow of holiday hope.

It's an informal collection, put together quickly (per the editor), and with some pieces from the authors' established worlds. It works so well - the stories are sweet and sincere, like visiting your writing family for the holidays. I especially enjoyed stories by Anna Kensing, Rachel Sharp, Ether Nepenthes, Adam P. Knave, Ashe Armstrong, Iris Sword, and John Lopez.

This is a nice little collection to enjoy with a glass of wine under the holiday lights on a quiet evening, or wherever you could use the holiday spirit. Thanks to the editor and to the authors for such a nice and kind gift to the world.

Althea
418 reviews135 followers
December 17, 2020
This was so promising but ultimately it fell flat and I DNF-ed it halfway through. It's a collection of VERY short stories that follow a wide variety of people and take place during several Winter holidays, but due to the length of them (at most a couple of pages) I just didn't feel any connection to them and/or felt a bit lost as to what was going on. I might try this again next year as a story a day like an advent calendar, as Rachel Sharp says it was originally meant as in the introduction.

Read for the 12 Days of Queermas Readathon!

Finley
185 reviews4 followers
December 28, 2020
I was fortunate enough to receive a digital copy of this collection for free when the editor was giving a few copies away a few days ago, but even if I had paid full price for it as I was originally planning to, I still would have reviewed it most likely, as it is so wonderful. If you are a queer person, I highly recommend looking up some of the writers who contributed to it and buying it directly from one of them, as many of them are donating the cost of the book to an LGBT+ charity, or at least a good charity that isn't run by bigots (and also, buy from the authors directly because screw Amazon).

As stated in the introduction to the book, this book is perfect for queer people to read on the holidays, one for the first 24 days of December like a gay literary advent calendar. Or, if you're like me and are trapped in the closet while you eat holiday dinner at your closed-minded relatives' house, you can also download the collection onto your phone to read while you're there to help you ignore all the deadnaming, allo-heteronormative questions, and other assorted bigotry you encounter. Regardless, these bite-size stories are a great way for readers of queer persuasions to celebrate the holidays and feel a little less alone.

Since this is a collection of flash-fiction, and over half of them were read while I was away from home, it's a little difficult for me to review every single one, but I would like to give a shout-out to a few that really stuck out to me (and to any of the writers whose stories I don't mention, I hope there are no hard feelings! They are all lovely stories, and I plan to reread each and every one again next year at this time.)

-How very Un-Persephone of You is the story that inspired the collection, and the idea behind it is excellent. Not only is the idea of coming out via "ugly" Christmas sweater amusing, but it was also refreshing to see how quickly Rory's family seemed to accept her, since so many LGBT+ stories center around the struggles against unaccepting parents instead of being an escape to a word where your family loves you no matter what, like they're supposed to.
-Free Wheat was also a very silly, cheerful story with little focus on the struggles of being queer, instead just allowing a nonbinary person to enjoy a different holiday experience. Like Nuage, I am not Catholic either, so I had never hear of Saint Barbara's Wheat, but I sure enjoyed following them on their journey to grow wheat from a cotton pad. Also, I am also non-binary, so seeing someone like me in a story is an added plus.
-Invite a Creature is the third story in a row that stuck out to me, and is an adorable fantasy story inspired by the asexual community's association and obsession with dragons. Meredith and Yuna's first night with their little dragon Kachi is something every new pet owner can probably relate to, and though he's a naughty little thing, it still makes me wish I could adopt one, too. This will probably be the first of the stories in this collection I share with my QPP when we see each other face to face, since I'm sure they will get an much a kick out of an ace person (maybe two?) adopting a dragon as I did.
-Stealth Gifts is another fantasy story, this one about a human man visiting the family of his goblin boyfriend and leaning about their Christmas traditions. As a DnD player and lover of fantasy, seeing people experiment with fantasy inter-racial relationships always interests me, and using a goblin as one half of the couple was particularly interesting to see, since so many people choose to only use them as low-level battle fodder. I really want to reas more about Tylore and Cog, and have messaged the author on twitter for assistance finding the story's prequel, Quicker Liquor, but if anyone else is familiar with it and wants to leave a reply about where to find it, go ahead, just in case my inquiry gets lost in Johnstone's other messages.
-Another Unnecessary Reimagining of a Christmas Carol (Except This One's Queer) is exactly what it says on the tin. And for such a short story, it gave me a lot of emotions and almost brought me to tears. Just by mentioning their family's refusal to use the narrator's sister's correct name on a stocking, I felt for her. The narrator's choice to spend her holiday happily alone with her sister instead of allowing both of them to be subjected to homo- and transphobia respectively made me so happy, and I was left wishing there was a longer version of the story, so I could spend more time with these sweet sisters.
-Good Harvest is Kwanzaa story in a post-apocalyptic setting, which I thought was very unique and creative. Not only is the story really cute, with two wives celebrating their heritage in a world where their tomorrows are never guaranteed, but I found it gave a very god idea of what the holiday is, as few people who are not of African descent ever get the chance to understand anything but the most surface detains of Kwanzaa. I wish that more people wrote Kwanzaa stories, as seeing a different culture or tradition in action can be so much better for encouraging understanding among people who are not familiar with it, and though Kwanzaa is in the top 4 holidays people think about during this season, there is a serious lack of stories celebrating its meaning and existence.
-By the Chimney with Care is a story nearly any trans person can probably relate to: trying to find the perfect name that fits their new identity as they true gender. This story gives a really cute holiday twist to it by giving the main character a deadline of wanting to have a name on their stocking that matches their partner's. The ending is really sweet and thoughtful for the partner to have done, and I felt like the fact neither the main character nor their partner have a name or defined gender, since it both placed attention on the nameless MC's current state, but it also make it easier for readers to imagine themselves and their current or dream partner in the roles.
-Finally, This Christmas was such a sweet story about two queer people developing from childhood friends to much more. Although I had to re-read the reveal to truly realize what was happening, but the fact the narrators friend was referred to as 'she' even before she had officially come out to the narrator as a girl was a nice touch that added that extra level of respect for her, even if she is a nameless fictional character. Regardless, though, I am rooting for the narrator as he and his girlfriend take the next major step in the coming season.

Iris Sword
Author 16 books6 followers
December 11, 2019
Hello! I wrote a flash fiction piece entitled "Good Harvest" for this anthology, a post-apocalyptic lesbian romance set during Kwanzaa. My mother is a Black female burn survivor like one of the main characters. Please donate to her GoFundMe to receive a copy from me: https://www.gofundme.com/f/greasefire. Peace and blessings!

Tessa
137 reviews10 followers
December 18, 2019
Really nice and diverse stories in this anthology! :D I'd also definitley recommend reading till the very last page, the author descriptions made me laugh :D
Sofie
22 reviews1 follower
December 26, 2019
Collection of fluffy and warm holiday cheer. Perfect quick read for this season.
Minerva
Author 11 books83 followers
Read
December 31, 2020
I'm one of the 24 authors in this winter holiday-themed charity anthology. To get your own copy, contact one of the authors and show them proof of donation to the charity of their choice.
In my case, donate to an LGBTQIA-friendly charity of your choice and let me know whether you want pdf, epub or mobi format.
More info in this Twitter thread.
Enjoy and happy holidays!

Anna Kensing
Author 8 books35 followers
Read
January 2, 2020
I'm one of the 24 authors in this queer holiday flash fiction anthology. My story is called "O Holy Night." You can get a copy from any of the authors. To get it from me, donate any amount to The Trevor Project, then contact me via Goodreads, Twitter, or Facebook, and let me know what format (epub, mobi, or pdf) you prefer.


Nicole Field
Author 18 books142 followers
Read
December 18, 2019
I am one of the authors in this anthology AND I am also a reviewer who has put together a Twitter thread outlining a short review of each of these stories.