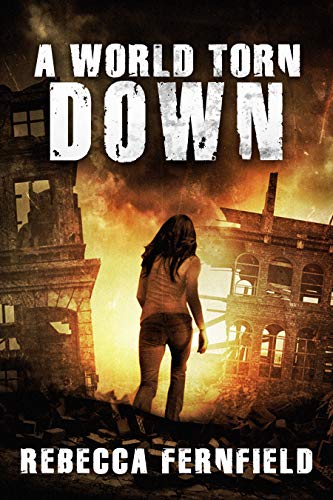 A World Torn Down: A Novel of Survival After the Apocalypse

3.90
202 ratings24 reviews
Rate this book
An extinction-level plague is only the beginning.

Cassie Morgan watched the world die from the comfort of her penthouse suite. She never expected her life of privilege to come to an end but, with all food gone, she has to face the survivors in the city alone.

Sometimes, when the SHTF, you have to kick off your strappy sandals, let your fake tan fade, your Brazilian grow out, and become the woman you were meant to be.

Rick Carter is the last of his unit to survive. To stay alive he must escape the disease infested city and head north to his prepper friend's self-sufficient farm. The last thing he needs is to rescue a woman with zero survival skills.

When the apocalypse arrives, most will die, some will survive, whilst others will thrive.

With most of the city dead, and no sign of rescue, Cassie and Rick have to rely on their own ingenuity to deal with the end of the world. Working together wasn’t what either had planned, but these are desperate times.

Does Rick have what it takes to get them to the farm?

Can Cassie rise to the challenge of survival?

Will Rick have the stomach to help when he discovers Cassie's secret?

'A World Torn Down' is an epic tale of the apocalypse with a fresh take on TEOTWAWKI.


Previously published as six books: 'The Road to Ruin', 'The Savage Road', 'The Outcast's Journey', 'The Path to Despair', 'The Route to Justice', and 'The Road to Redemption'.

The series gave me a very Walking Dead comic feel. I loved it, and the characters were all very well written. The detail that went into all the characters was brilliant.

It was fast paced and kept you interested right to the the last sentence.

I loved the strong female characters, Cassie being my absolute favourite, I love how she just gets things done and doesn't let the male characters walk over her.

This series kept me on the edge of my seat the whole time I was reading. I would have to stop to go to work, and all I could think of was the book and getting back to finding out what would happen next.

This book has so many errors. It screams 'need an editor'. The errors are big ones too like, 'the bacteria make contact with her skin' and 'his eyes are bleared'. I am not super strict on grammar but this book just had too many problems. DNF'd it. :(
Deborah
10 reviews
January 15, 2020
Junk not worth reading

This author started out with a decent storyline & positive characters, but decayed into nothing but insane ugliness with no functional storyline. This is a horror writer's bad attempt at real storytelling, whose moral characters nosedive into amorality with no rhyme or reason. Don't waste your money.
Stevens Rebekah
63 reviews
February 8, 2020
Do NOT READ

I wasted precious hours reading this in the vain hope that it would get better, sadly it got worse and worse so ok the 'bad' guys got their comeuppance it was still a very painful read I,m kicking myself for not putting this down sooner.
Jessica Bronder
2,013 reviews21 followers
January 2, 2020
A man made bug was released that caused a plague to decimate the world. The story starts with trophy wife Cassie Morgan and soldier Rick Carter trying to get to his friends house. They meet people, both good and bad, children that they protect, and situations that are tough to get through.

I really enjoyed this series. I like a good post apocalyptic story and I quickly fell into this one. Cassie doesn’t seem like one that will survive but she definitely surprised me. Rick was a typical soldier but he also had a heart and surprised me several times throughout the book.

Of course we meet several other characters throughout this journey. Some were good, bad, and continuously changing. There were a couple that I was pulling my hair out at screaming at them because I wanted to shake them and wake them up then there were others that I wanted to group to run away from as fast as they could.

Over all this is a great read and I’m so happy that I could sit and read them all at once instead of having to wait for the next book. If you like a good post apocalyptic story, you need to check this one out. Since this is the first book of Rebecca Fernfield’s I have read, I admit that I can’t wait to check out her other stories.

I received a complimentary copy of this book. I voluntarily chose to read and post an honest review.
Doc Fried
1 review
February 23, 2020
This is a great series!
It gives you the best and the worst of mankind after cataclysmic events occur, changing our future path. As the survivors struggle with life and death situations in a daily basis, the author takes the reader through the entire range of human behaviour and emotions. Some rise above, and some of her characters hit the bottom.
The stories are realistic (in light of an apocalyptic event), and both frightening and heartening at the same time.
The continuing thread through the entire series is of despair and hope, and finally redemption.
The journey through is tumultuous and exciting, and results in a tale that you can't put down, as you try to find out what happens next to the characters.
Plan to spend your entire weekend engrossed in the book!
Mrs Clarereadstoomuch
230 reviews2 followers
February 22, 2020
Great Read

Plague kills most of the population and this story follows different survivors whose life’s twist and intwine with each other.

Great character building. All the characters have their own strong elements about them whether bad or good.

This is very well written, I honestly found it hard to put down.

The story spreads over 3 years which is really interesting as it sets out how the communities have survived.

Only one query - how come the women haven’t ended up pregnant. Such as Monica and the workers? There are a few holes in the explanations/descriptions.
Susan
628 reviews1 follower
April 11, 2020
Review

Somehow the only person smart enough to have a weapon is an evil psychotic woman. Even the soldier, Rick, doesn’t look for ways to make a weapon once his gun is out of bullets. He is rather a weak character. Only the women in this book have any backbone. The ending was satisfying in that the survivors carry on. Strangely enough petrol still has a spark after 3 years. Maybe it was too much work for the author to think of alternative transportation.
Kimberly
323 reviews
January 9, 2020
Decent story

I’ve read many better though. It’s in England so many of the words/phrases are unfamiliar. Some of the storylines are improbable as well. For instance...fighting over gas/petrol that is 3 years old. Without stabilizing gas won’t last even half that long. The characters are interesting and a few grabbed my attention enough for me to finish reading the series.
Sharon
4,152 reviews27 followers
January 31, 2020
This is my first time reading this author and she has written a fast-paced page-turner. The plot is a good one and it’s well written. The characters have depth and some great dialogue. If this is your genre of books to read then grab this one, you shall not be disappointed!

I received a free copy of this book via Booksprout and am voluntarily leaving a review.
Irene Sedillo
17 reviews1 follower
May 18, 2020
Entertaining

Good entertaining story featuring strong female characters including one memorable villianess. The characters are woven into the story and have you cheering for or against them throughout. Story has a good start, middle, and ending. Was a fun read all the way through.
Twilla Wickedly Sweet and Synful Book Blog
978 reviews8 followers
October 28, 2020
Great

This story had me in its thrall for days. I almost didn’t buy it because it had no romance. What happened to Lina & Cassie? I was seriously annoyed that nothing was done about Saskia. Not by Devon or Jackson. So Sergie is going to continue the slave business? The ending was perfect. I recommend this book!
This entire review has been hidden because of spoilers.

Loved the characters of this book and how they are all in twined in one another’s stories..but the jumps in dates between books are too big. You don’t find out what happens to some of the people who have been a big part of the story and I feel not enough crucial details were given in some parts. Was an easy read but too much left out about certain characters.
Heather Bane
2,415 reviews
November 21, 2019
This was really good. I was pulled in from the very beginning and kept interested throughout. I found it very well written and hard to put down. I recommend reading.

I received a free copy of this book via Booksprout and am voluntarily leaving a review.
debra k howell
3 reviews
April 3, 2020
Some fights were repetitive but a decent book. Don’t like dropping sex into the mix

Some fights were repetitive had and there was too much sex talk. This is a

I had hoped that there was more to this than sex , abuse and all kinds of fighting factions .There were not many characters to like .
melissa wright
14 reviews
December 17, 2019
Ok

So many people to keep track of, not a great end , as needs more ! .. Needs more explanations
HOLLY
537 reviews3 followers
December 25, 2019
It was fine, different I liked the characters.

WOW author Rebecca Fernfield, what a story. If you don't do anything else in 2020 let it be reading this while series.
Libby
29 reviews
January 16, 2020
Pretty much hated every character and was glad when most were killed off ...

Read all of the books in order to really enjoy. Storyline continues to grow and develop. Characters are realistic and get better and better.
lucy keenan
164 reviews
February 19, 2020
Better

It was gripping and fast paced I couldn't put it down once I started. I loved it thank you so much
shirley j kidd
97 reviews
April 16, 2020
A world torn down

I enjoyed this book. It had 6 books in one. You get into the people almost like they were real. Good book
Robin
17 reviews
June 7, 2020
I really enjoyed this book. Humans prove to be far more terrifying than the walking dead.
Displaying 1 - 24 of 24 reviews