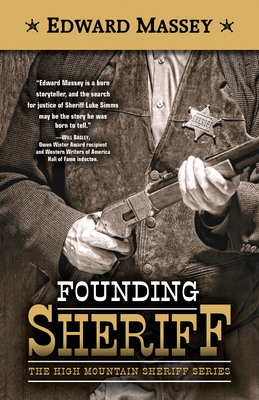 4.40
5 ratings4 reviews
Rate this book
"Immigrant cooper named constable and then sheriff investigates a girl murdered in her bed and tracks her husband who escaped in Grandma's buggy. Capturing him in the high mountains in Bonanza Flat, the founding sheriff decides not to kill the son of a bitch and sets in motion a long and broken path to a tradition of justice where none existed before in Summit County, Utah Territory. Capture comes swift. Conviction takes longer. Execution drags on for years. Life in a growing frontier town that starts with six people and no buildings either demands frontier justice or unfolds its apparent willingness to assist the murderer's effort to avoid his fate. Indian troubles, vigilantes' murderous justice, and a railroad hell-on-wheels town threaten the founding sheriff's promise to the murdered girl's mother"--

I’ve never read what I’d call an LDS Western before (Latter Day Saints). This one’s set in Utah in the months and years immediately following the end of the Civil War. The sheriff, the novel’s protagonist, deals with recalcitrant LDS judges, skulduggery from murderous LDS vigilantes, and sleight of hand from LDS Marshals. In addition to dealing with issues arising from the agendas of various “gentiles” (non-LDS).

A well-written novel soaked in LDS and 1860s Utah authenticity. It moves slowly. It’s plot is intricate, in-depth and genuinely satisfying, despite the twists of fate that often enough favor the ne’er do wells. Recommended for a solid autumn or winter read. Take your time. Ride slow.

Eugene Joseph
2 reviews
October 3, 2021
A young, expectant woman is brutally murdered. Her killer flees. An immigrant carpenter—more precisely, a cooper turned sheriff—picks up the scent and trails the fiend through the high mountain paths of 1865 Utah Territory. Eventually, the lawman, Luke Simms, finds his man in a mining camp, and after resorting to a rather sharp method of persuasion, escorts the suspected killer to jail to await his day in court. The victim’s mother demands nothing less than the death penalty, and is willing to use her own rifle to bring it about. But the story is only beginning!
In this, his latest novel titled Founding Sheriff, story craftsman Edward Massey not only constructs a gritty and suspenseful tale of frontier law and order, but in addition, weaves a backdrop that superbly showcases the frequent suspicions, jealousies, and disappointments that existed between the local native Indians and the recently-arrived Mormon settlers.
A wonderful portrayal of life in the elevated back country of pioneer Utah, Founding Sheriff is a compelling, page-turning adventure worthy of Five Stars and, definitely, your interest. (Reviewed by Eugene Joseph DiCesaris)
June Rose
1 review
May 11, 2020
It’s just after the Civil War in Utah Territory when a vicious killer shoots his young, pregnant wife, steals her pa’s guns and takes out in grandma’s buggy. He’s hasn’t reckoned on Sheriff Luke Simms, a Mormon sheriff who routs out evil with the same patient determination he exhibits at his other occupation as a cooper making barrels. A transplanted Englishman, Luke uses a cane and rifle to bring the wife killer to justice, but justice takes her sweet time in bringing about a conviction. The killer uses every legal trick and maneuver he can think of to delay his trial, and although Sheriff Simms gets aggravated, he never gives up on the justice system.

In the meantime, the sheriff must deal with Indian hysteria and overbearing railroad officials. The author has a way with phrases, “The homestead …. called a cattle ranch amounted to little more than a fight with the high mountain desert.” And his portrayal of a manipulation sociopathic killer is especially well drawn.

If you are looking for a little bit different kind of western, where reason and common sense rule amidst the Mormons of Utah Territory, then this is the book for you.
Kathy Davidson
69 reviews
May 27, 2020
Watch for this book to be released 8/19/2020 from Gale, a Cengage Company.
In 1860 Summit County, Utah had a population of 200 pioneers, one of which was Luke Willford Simms. He followed the saints from England being interned as a copper, but President Brigham Young asked him to be the first sheriff in the growing county. Having no experience, he asked his father send him Peel’s Principles for constables, which he used to guide him through the uncharted territory of the changing law enforcement as the county grew to about two thousand when this book takes place in 1866.
Massey uses historical facts to weave his tale of how Sheriff Simms handles the first murder in the county. Luke Willford carries a walking stick as investigates the first murder in the county and hunts down the killer only to have to wait as the wheels of justice are invented so Fisk Scales can pay for his crime. Simms never dreamed it would take years with delay after delay as the new state was under the watchful eye of the federal government and the interruptions of Indian troubles and changes of lawyers and judges delay the proceeding, making everyone wonder if justice will ever happen.
Displaying 1 - 4 of 4 reviews