Goodreads helps you keep track of books you want to read.
Start by marking “Our Fake Marriage Vol. 1” as Want to Read: 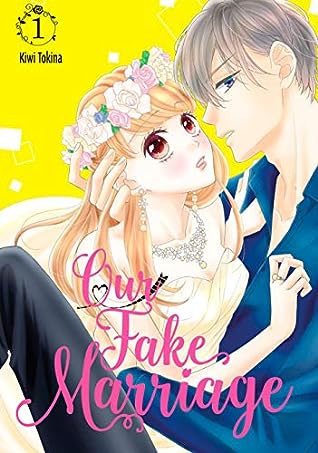 We’d love your help. Let us know what’s wrong with this preview of Our Fake Marriage Vol. 1 by Kiwi Tokina.

To ask other readers questions about Our Fake Marriage Vol. 1, please sign up.

Be the first to ask a question about Our Fake Marriage Vol. 1

Start your review of Our Fake Marriage Vol. 1

Dec 06, 2019 Rebecca rated it liked it
Shelves: manga, romance
Ah, another josei romance with an asshole hero that's somehow ridiculously easy to read. Fun fact, a couple panels from this manga are featured in My Boy in Blue Vol. 13, which is why I picked it up in the first place.

Jan 18, 2020 scarlettraces rated it liked it
Shelves: ebooks, manga-manhwa, the-toppling-piles
So I might have 3-starred this because objectively it's fairly average and from a feminist perspective it's, uh, what you would expect, but honestly? This shit is my jam. Never going to get tired of it.

Figured out where all these smutty josei titles landing from Kodansha are coming from btw, it's Ane Friend. I want them to publish Gokekkon wa Mada Desu ka?, no idea what it's about apart from a marriage theme (and being a high school teacher?) but the cover looks awesome.

Trivia About Our Fake Marriage...