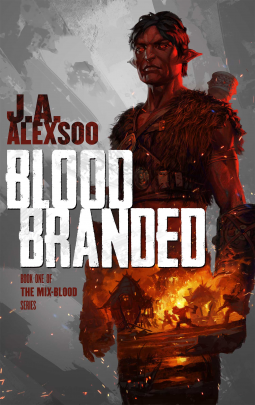 4.00
3 ratings3 reviews
Rate this book
Defiance is paid in blood.

Their time is up. The crimsons are coming, marching on Hammerstone to crush the rebellious grays who renounce their rule. The graybacks have defied the ban that forbids trade or alliances with other races.

Frafnar understands intolerance better than most. Every season the grayback settlements send tribute to their oppressive orc cousins, and Hammerstone is no exception. After Frafnar is denied the opportunity to join the tribute guard because of his mixed heritage, he leaps at the chance to prove himself when his father’s signal horn is left behind.

Smoke rises in the distance. Frafnar must warn Hammerstone of the threat and comes to realize that his people are struggling with what he’s faced all his life. Now he must fight alongside those he loves—and hates—to protect his home.
Can Hammerstone withstand the siege, or will it become the final gravesite in a failed rebellion?

When the crimsons strike, always remember…
…strength in blood.

***
If you’re a fan of the epic or high fantasy genres, coming of age stories, or action-packed tales with haughty orcs and mysterious magic, then you don’t want to miss Blood Branded.

I'll let you in on a little secret. I spend more time on Pinterest than I probably should. But the art is so inspiring and beautiful I get lost in it. I'd love you to join me if you like all thing fantasy & science fiction as I do!

I also have my little corner of the interwebs. Sign up for email notifications for free content, giveaways, updates on my next novel, and other fantasy & science fiction content.

J.A. Alexsoo lives in Ontario, Canada, and has forever been a fan of fantasy and science fiction. When not working on writing or imagining new adventures, she tours the lands with her three trusty canine companions.

You can find out more at: https://jaalexsoo.com/about/

4.00
3 ratings3 reviews
5 stars
0 (0%)
4 stars
3 (100%)
3 stars
0 (0%)
2 stars
0 (0%)
1 star
0 (0%)
Displaying 1 - 3 of 3 reviews
TheHomesteadReader
444 reviews
September 30, 2019
The story starts out feeling a bit like you've jumped into the middle of a story right before the big climax. Not that it was a bad thing, but there's not a lot of lead up into said climax. You are given a brief introduction to Frafnar's back story. He's half human, half orc. (Orcs in this particular story are warriors but they are far more intelligent then most fantasies play them off.) Because of his half blood lineage, he's constantly looked down upon despite trying to prove his worth. He's hoping with an incoming army threatening their people he might get a chance. When his father leaves behind his war horn, he takes the opportunity to run after his father. Unfortunately he finds himself in a bit over his head.
While the first half focuses a lot on Frafnar, the second half I felt really belonged to his mother as far as the stories focus went. She has some druidic/shamanistic abilities that feature heavily during the battle. While Frafnar is present I think he played more of a secondary aspect.
This is a very short read. For being a fantasy novella Blood Branded is surprisingly fleshed out. I was left satisfied with what I read. Everything was cleanly presented and easy to follow. One example I can give of this involves several ranking/groupings with their own names that you don't get much description of outside of the glossary, (props for that!) But the way they are written you get the general idea.
It really reminded me of the old Dragonlance books I read as a kid. Over all I really enjoyed this. I would love to see the author take this and run with it and really build a fuller story with it.
Definitely worth the read.
​
**E-Arc kindly provided by the author in exchange for an honest opinion.
Truly Trendy PR
234 reviews2 followers
October 3, 2019
Blood Branded is the first book In The Mix-Blood book series by J.A. Alexsoo. A well-written fast-paced fantasy novella that will keep you on the edge of your seat. A young adult fantasy full of mystery and intrigue that will leave you wanting more. I look forward to reading the next book in The Mix-Blood series.*I received a complimentary copy from RABT Book Tours and the author in exchange for an honest and unbiased review.*
Veselina
226 reviews4 followers
February 5, 2020
Thanks to Netgalley and the publisher for the opportunity to read this book.

I always lived stories about orcs. This is a very interesting story about half-orc, half-human with magical powers. He is not accepted by his peers and need to prove his place. His village is being attacked and he find himself in the center of the event.

I hope the next book will be out soon.Enjoy.
Displaying 1 - 3 of 3 reviews