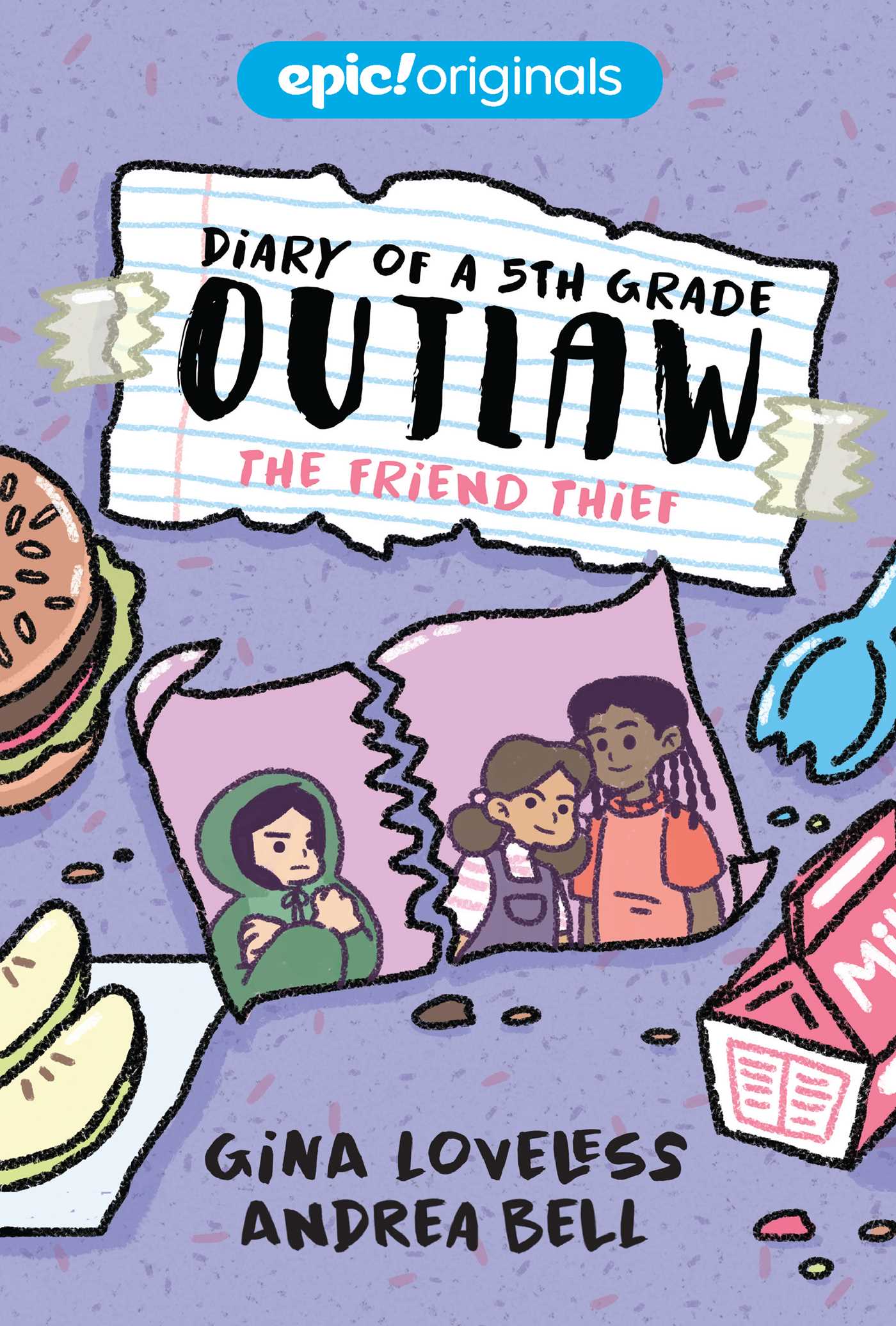 Diary of a 5th Grade Outlaw #2

4.39
41 ratings12 reviews
Rate this book
In Book 2 of the Diary of a 5th Grade Outlaw series, life is going great for Robin Loxley—until a friend thief comes along and threatens to ruin everything!

After her victory over Nadia, the playground bully, Robin has her old best friend back, plus a whole gang of new friends! But when that Nadia tries to steal away all of the people she holds dear, will Robin be able to keep her band of merry misfits together? Find out in Robin's second illustrated diary—a tell-all about growing up, dealing with bullies, and trying to do what’s right.

11 books21 followers
It was five years after Gina Loveless earned an MFA from California Institute of the Arts that she realized her mission as an author was to write books that helped all the weird kids of the world feel less alone. When she’s not writing or reading, Gina can be found in Eastern PA, boogying at concerts with her husband, tending to their awesome produce garden, or snuggling with her rescue dog Gerdie. 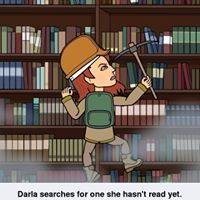 Darla
3,149 reviews446 followers
September 15, 2020
What do you do when someone is stealing your friends? Hopefully you don't go bananas like Robin and embarrass yourself on the playground. This second book in the series was a bit heavy on the "then I did this and then she said this" side of things. The whole "I put my hood on" gesture seems a bit overused as well. Extra points for the "aha" moment at the end when Robin realizes she is more like Nadia than she wants to be. Dun, dun, dun. . . A preview of book #3 was included and I am looking forward to checking it out. Literally. Got it on my Hold list on my library account.

Reading_ Tamishly
3,943 reviews2,169 followers
March 11, 2020
I am feeling sad right now because I could not like this one. Seriously, it's not difficult to like a children's book with all the cute, colourful illustrations, cover, lively characters and all but this one is just not the one with all the right feels that usually keeps oozing from children's fiction. I feel like the book focuses more on the gossip and bully-talk that's circulating in the school rather than the school activities and the friendship circle. Something is off about the characters. They just couldn't give me the childlike vibes. The plot isn't much and the writing feels a little flat for me and then it tends to get overdramatic now and then. The book gave me some kind of negative things regarding friend circles and school. I wish I was able to enjoy this little book. Hope the next book is better than this.

Thank you #NetGalley for the copy of #TheFriendThief
Kelly Anne Blount
Author 18 books266 followers
May 6, 2020
The Friend Thief is an excellent story with superb illustrations!

Losing or having differences with a friend is something many experience, especially in late elementary school and middle school. This book perfectly illustrates how these situations can come to light and how children may feel while navigating friendship issues.

I'm excited to read the next book in this series!

Stacy
48 reviews3 followers
April 29, 2021
A fun continuation of the series, showing that people ARE capable of change.

Barbara
12.9k reviews264 followers
April 4, 2020
Picking up where the first book in this series left off, protagonist Robin Loxley has the world on a string after making friends with LJ, another fierce basketball player, and bringing down the reign of Nadia, the school playground bully. She's also thrilled that her friendship with Mary Ann is thriving once again. But after a careless mistake on the court and her distraction leads to problems, things start going steadily awry. As Robin somehow manages to hurt or step on the toes of one after another of her friends, she seems to be losing all of them. And it seems as though everything she does ends up hurting or pushing away yet another friend. Naturally, Robin blames Nadia, who she is sure is out to steal all her friends, starting with LJ. But Robin may have misjudged Nadia, and it might be that Robin will have to change her ways and do some serious apologizing if things are ever going to go back to normal. The book contains good lessons about keeping and losing friends, and the large font, white space, and colorful illustrations that complement the text encourage young readers to keep going. If they like this as much as they liked the first book in the series, I'm sure they'll be back for more. Those younger readers in third or fourth grade who aren't quite ready for the Diary of a Wimpy Kid series might gravitate to this one. Some of them will relate to Robin's proclivity to hide in her hoodie when things aren't going so well.

Theediscerning
5,877 reviews64 followers
March 22, 2020
Robin Loxley has beaten the Sheriff of Nottingham, and got her best friends, Mary Ann and LJ back in her gang. But, this being the sequel, the Sheriff is trying to get revenge, and doing so by stealing said friends from Robin's corner of the wood. And the worst thing is, those friends are actually willing to change sides, turning away from Robin and towards the evil-doer.

Well, I said wood but it's actually a playground. Yes, this series has what seems to be a really weird and (I hope) unrealistic impression of people being rulers of the playground, using school-day recess to 'capture' it (and some attendant popularity) as if it was a battlefield. It made this book a lot less satisfying for me, compared to the first in the series, for it just rang false, and seemed to be stretching the whole Robin-Hood-transposed-to-middle-school-USA thing a little too much. However, despite that, the stretching did not break the format, for it's a good one, and the author knows how to write for her target audience, even if she can lay things on a little too thick at times, and not all of the friends are worth worrying about (the rapping twosome, I'm looking at you again). This wasn't game-changingly bad, in that I would still come back for the third in the series, but I think the cleverness of before needs to be regained before I can start strongly recommending these sequels.
Christina
171 reviews4 followers
April 4, 2020
Oh Robin, a girl after my own stomach...err heart. She’s back and her appetite still cannot be tamed, especially when there are corn dogs and candy apples involved. DIARY OF A 5TH GRADE OUTLAW: THE FRIEND THIEF is the second book by Gina Loveless and Andrea Bell chronicling life at Nottingham Elementary through amusing diary entries and playful illustrations by the hooded, hungry, heroine: Robin Loxley. One week has passed since her crusade against the school bully and now everyone is looking forward to the upcoming fair. What promises to be a delicious event might turn sour with the tension that is building between friends. Misunderstandings, poor choices, and hurt feelings throw Robin for a loop and she has to learn to take others feelings into account if things are to go back to normal—what a fantastic lesson here! This relatable story encourages readers to reflect about their actions, learn from their mistakes, and that apologies matter—true friends will be forgiving and the band of merry misfits can play on!
T Olsen
970 reviews15 followers
February 21, 2020
Like in the first book, the characters are very good and the story is easy to read, but the plot isn't much to write about in this one. There's also a lot of repetition from the first book, and the comic panels still won't win any prizes, but fit the story.
Raqulle Sherwood
5 reviews
January 20, 2023
"most relatable fr! i feel my homegirl!! nadia is such a pick me! im not even trying to be mean.. its just that nadia gets under my skin so deeply.. but, i love robin! she is my favorite character from the book series! sorry!:))"