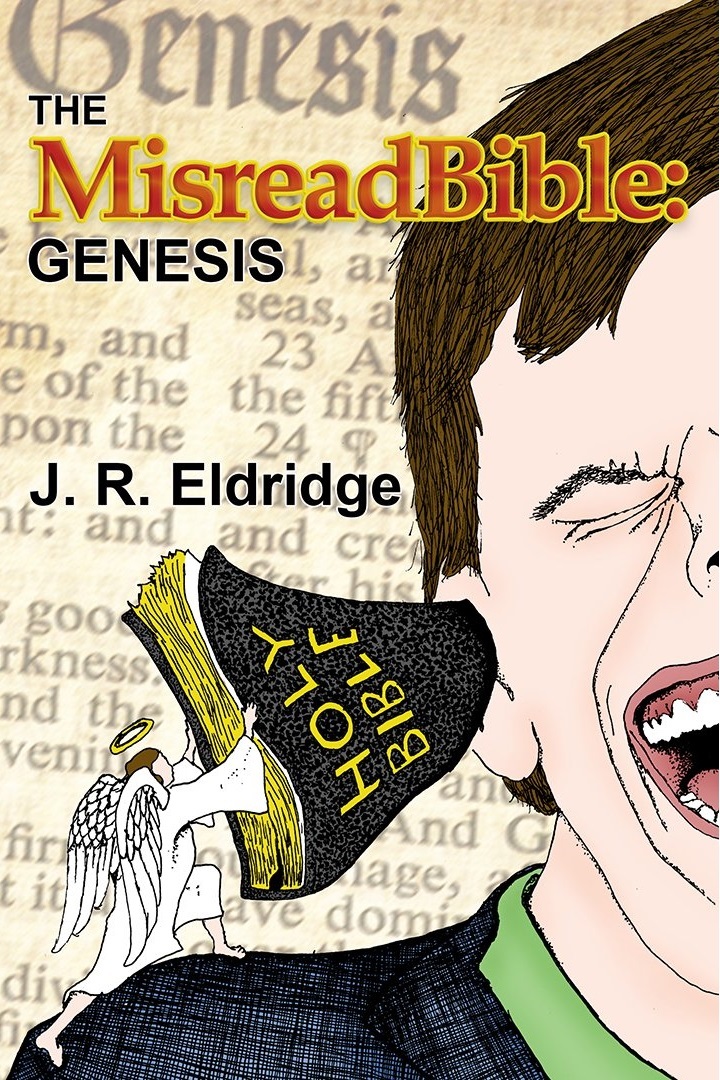 4.44
18 ratings11 reviews
Rate this book
A collection of twisted Bible tales from the warped mind of J. R. Eldridge. Drawing from his fascination with religion and mythology, Eldridge takes the reader on a journey from the creation of the universe to the arrival of the Israelites in Egypt in this blasphemously funny retelling of the Book of Genesis.

A lonely deity creates the universe in his mother’s basement and makes a little clay man who falls in love with his own rib. After the humans engage in some freaky angel sex, God decides to flood the entire world, saving only a drunkard called Noah and his family.

Once the humans have repopulated the Earth, God chooses one man called Abram, drags him from his home in the middle of the night, changes his name, and then tells him to kill his son, forming an everlasting covenant with him and his descendants.

Later, Jacob steals his brother’s birthmark, boinks his cousins, and comes up with an innovative way to breed sheep. He fathers a dozen kids including Joseph, whose brothers get tired of his dreams of grandeur and sell him to some shapeshifting Ishmaelites who take him to Egypt.

4 books7 followers
J.R. Eldridge is a British satirical fiction author with a fascination for religion and the absurd mythology that surrounds it. He especially enjoys poking fun at it. He began writing joke Bible verses on Twitter, and eventually moved on to writing parodies of Bible stories. He collected some of these in his MisreadBible series.

Now for you non-believers. Have you read the Bible? No, I don’t mean cover to cover. Most of the true believers haven’t done that either, no matter what they claim. Have you read a page here and a page there so you have an idea of what the writing is like? Have you been exposed to “Bible Stories” when you were a kid or in other situations where you had to just keep your mouth shut and pretend to listen, even if you thought it was a bunch of Bee Ess? Do you have a sense of humor and like satire? If so, you might enjoy or be amused by this book, to a point. I’ll explain.

Like the book this is satirizing, The Misreadbible: Genesis has a lot of genealogy (A begat B who begat C and so on) that is even more pointless here than in the original. It has a lot of contradictions where one part of the story can’t be true if a part you read earlier was true. (At least in this case, those contradictions are on purpose, at least some of the time.) I also couldn’t possibly use the word blasphemous too many times in this review. If you’re even a little bit of a believer and have chosen to plow ahead, you’ve been warned multiple times. You’ll be offended. Even non-believers may be offended. If you’re easily offended, stay away.

I found that I was amused, at least for the first several chapters. The blasphemy wasn’t an issue for me (it was a positive). The anachronisms (references to Star Wars, for example) got a chuckle, referring to Sodom as “a well-know party town” or describing characters using various forms of the F-word struck me as even more funny. But by the end some of the jokes or approaches were getting old and felt overused. I’d been amused and now I was getting bored with the concept. It was feeling too much like the book it was satirizing. As though it was never going to end. If this appeals to you and you give it a try, keep in mind that if you reach your limit and are no longer amused, you’re allowed to stop reading, or to take a break and come back and finish later. I promise, you won’t get sent to hell if you do.

**Originally written for "Books and Pals" book blog. May have received a free review copy. **

Barb
100 reviews
July 11, 2019
First, this is not for children (language) nor is it for those without a sense of humor (maybe a little bit sacrilegious).

I've read the bible (KJV) several times in my lifetime. Never have I read anything bible related that was this fun. I started this book with the knowledge that I had other things to do so I wouldn't finish it right away. Nothing got done and I finished it in one sitting. Now, the bible makes much more sense. ;)

Not quite as random as a Monty Python skit, this is definitely as funny. Eldridge needs to write more! Now I need to go find him on Twitter. :D

Tina G.
244 reviews2 followers
June 24, 2019
The MisreadBible: Genesis by J. R. Eldridge and narrated by Joshua Saxon is just what I needed to LMFAO today! Highly recommend if you are needing a laugh/having a bad day or looking for something new.

This is an amusing retelling of bible stories with an adult twist. There’s plenty of variety- a Star Wars themed fable, a Dr. Seuss-ish tale, and so on. Some of the stories include; how God made the world, the making of day/night/seasons, where the saying “Are we there yet?” came from, and plenty more.

Some examples of what you will hear (very small list, but hopefully this will give you a general idea): Two sons were born to eyebrow, Jock itch is the father of…, sea monkeys, marinade is the father of pesto/ketchup/hollandaise/etc., Isaac was playing smush the oyster with Rebekah, Isaac named the well Rehoboth meaning thank F for that, and many more.

The table of nicknames was one of my favorites, although it’s extremely difficult to pick favorites because they all held my interest and made me chuckle. I haven’t laughed this hard from a book since Succubus Christmas Special: A LitRPG Short Story. My favorite line was: “Because this is the bible and it’s always the women’s fault.”

The narrator, Joshua Saxton, did an excellent job. I would listen to him again.

I hope this is not the last we hear from this author. This will be a repeat listen for sure.

*I was given a free review copy of the audiobook at my request and have voluntarily left this review. Thank you for allowing me to listen and review the book!

Parental guidance/trigger warnings: swearing off and on throughout (f, s), talk about incest & rape, and religion.
Gavri Crawford
1 review1 follower
April 7, 2019
As a Christian, I find this book really funny. Some people said that it's weird that I enjoy the book so much consider this book is "mocking" my religion. People said that I should feel offended by it but let's revert back to the whole reason I read the book. If you are like me, someone who just wanna have a good laugh from a book then this book is for you, but if you are a religious person with closed mind, then don't bother and sucks to be you because this book is a masterpiece, it's funny, entertaining and surprisingly light. Starting it I thought I have to have high knowledge about bible and the inside christian jokes, but turns out you just need to have basic knowledge about bible stories. I read it when I have spare times between classes and recently finish on a field trip. I live in a muslim majority country and I couldn't share them a lot because my fellow Christians friends are too uptight and my atheist friends are only a few so for all of you citizen of the world, this book is very recommended read them if you have a stressful day, you won't regret it. I laugh through the entire book.
Donald Gold
1 review
July 20, 2019
This is a sometimes brutally honest, sometimes cleverly sarcastic retelling of the book of Genesis.
This author playfully recounts all the plot twists, name changes, inconsistencies, and impossible time shifts with irreverent humor.
I haven't been this entertained by an audiobook in a very long time.
The narrator captures the tone perfectly, and is excellent.
I am impatiently waiting on Exodus.
Lucifer
1 review1 follower
March 24, 2019
It took mere days to read this book as it dragged me in with its satirical retelling of the Bible. It had me laughing every page and I was unable to put it down. I would definitely recommend this book to anyone who wants to leave their worries behind and be dragging into the world of chaos the original Bible created.
Deedra
3,677 reviews19 followers
August 18, 2019
A fun riff on the first book in the Bible.You do have to wonder where some of the stuff in there came from.This book explains it in a new way.lol Joshua Saxon was the perfect narrator. I was given this free review copy audiobook at my request and have voluntarily left this review.'
Justin Salisbury
Author 1 book3 followers
August 14, 2021
The author gave me an audio copy to review.

I really enjoyed this book. I laughed so hard at the part where Abraham was ninjaing dudes foreskins off that I almost wrecked while driving. So you may not want to listen to the audio book while driving.

This is really well done. The narrator of the audio book is amazing.

Marsha
803 reviews5 followers
November 15, 2019
And entertaining view of what Genesis REALLY says! More honest for the general population than the actual words in Genesis having been translated from the original several times in an attempt to convince the world that it's more than a myth :-)

Aubrey Cleeves
90 reviews7 followers
October 13, 2021
It’s not very often that I read a book in under two days, but The MisreadBible: Genesis is the exception. The blurb pulled me in, the opening pages even more so, and from there I was hooked. J. R. Eldridge has created something satirical, humorous, and probably controversial amongst these pages, and it is a work of genius.

I loved the idea of reducing the creator of the world to a guy in a basement making the planet and everything in it out of rudimentary items around the house, and the idea that humanity came from a packet of sea monkeys. The images conjured up were effective, and as a parody of the bible it worked really well (for example, Noah’s Ark). I don’t know the bible well, but the stories I did know really made me laugh, and the ones I didn’t know so well were kept relevant with analogies to pop culture (i.e. Star Wars).

The characters were a little basic, but not in a bad way. The bible doesn’t really do characterization or character development as those in it just seem to do things chaotically and without thought, and this is something Eldridge mimics brilliantly. Hearing Abraham being a dirty old man, Joseph’s dreams and Jacob being overly blunt was really funny (something akin to a Monty Python sketch) and the creator generally revelling in violence was something I had always questioned about the bible. It was nice to see someone point it out and shine a light on something that can’t sit comfortably with many.

As the author states, he is familiar with the source material and wrote this book for his own reasons. Whilst it won’t suit everyone, for those who love satire and parody, this will be one they can’t put down. I hope to read more of Eldridge’s satire soon.
Frank Hofer
Author 2 books5 followers
January 15, 2020
Fine in small doses

It makes more sense than the original source material, but that’s not a very high bar. This book is amusing at first but the jokes tends to get repetitious.
Displaying 1 - 11 of 11 reviews