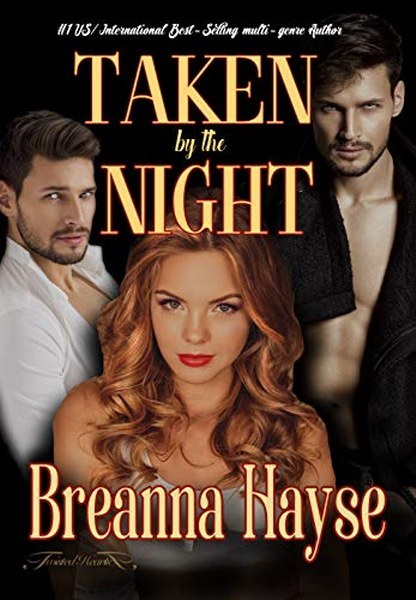 3.67
75 ratings6 reviews
Rate this book
What would you do if you were forced to come face-to-face with the secret part of your soul you’ve kept hidden your entire life? Would you expose that secret if it meant the possibility of living your greatest fantasy?

Hospice nurse Courtney Wells expected to encounter a commanding personality when she agreed to provide care for an old friend of the Romanian aristocrat, Baron Marcas Kalnovky. Confident, self-controlled, and independent- very few things could rattle her, that is until she meets the handsome and mysterious man with silver-gray eyes and old world charm. The moment she hears his deep rolling accent, her body quivers with a desire she can’t deny no matter how hard she tries.

From the beginning, Marcas demands something the young American woman’s not willing to give- submission. His desire for her takes him on a journey that forces him to face himself in a way neither he, nor Courtney, anticipate.

By day, he's the same man he always was- controlled, calm, and commanding; but at sunset, he tears in half and his two opposite sides war against one another. The only thing they have in common is the beautiful, feisty woman who’s turned their life around. Both sides not only want her, but they also need her… all of her, in every way she can be taken... Together at night- which means they have to find a way to get along.

When Marcas finally confesses the truth, Courtney’s both terrified and intrigued. When she’s bound naked and helpless at the mercy of all of his desires, she's shocked to find that she’s soon begging for both of him in every manner imaginable.

When she discovers the pain Marcas endures to be with her; she’s determined to find a way to help him. Little does she know that there’s more to curse than his being forced to face himself every night—it wants a sacrifice. A terrifying sacrifice that would cost Courtney’s life she’s compelled to come to terms with her own hidden darkness.

Will her love be enough to break the curse and heal his wounded soul? What about the cost? Would he ever forgive her if she succeeds in setting him free?

My first book, The Game Plan, was published in 2012 and opened the door to the now-booming world of Age-Play literature. Since that time, I’ve devoted my ‘spare’ time to writing, researching, community involvement, and private and group pro bono counseling in deviant behavior, alternative lifestyle, and addiction recovery.

I was formally ‘dungeon trained’ as a Domme before discovering my submissive side when I joined the service. My scenarios are pulled primarily from either personal experience or observation, including spending time in clubs as the safety/medical officer. My multi-faceted background allows me to glean from many avenues and provides a unique and intelligent literary experience through elements of fantasy and fiction. I also address the questions and psychology of the lifestyle in a manner that is fun and informative, and based on 'the real deal'.

I live with my husband, musician, and fellow-author, John Hayse, and two border collies in southern California. We practice a 24/7 D&S relationship with speckles of AP (and many trips to Build-A-Bear), and happily spend every moment together that we can. My hobbies include my puppies, hiding my vanilla salt-water taffy where John can't find it, exotic art, collecting inspirational trinkets, and developing my own paddle line. You can also see me as a featured author/instructor in professional conference settings and as a Sexpert for kinkyliterature.com.

In short I loved this book, it was a truly orginal romance and was sexy and sweet too! Recommended for people who like spanking romances or gothic romances. 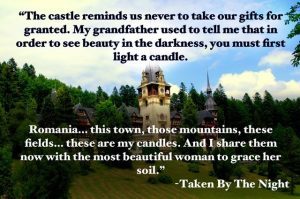 This one took me quite a while to get into, its a strange but also intriguing tale extremely unique in its individuality, it was also a rather serious story.
Despite the subject matter involved, this does also have a much deeper message to impart to its readers.
The curse itself heavily delves into acceptance in all its forms, acknowledging and also embracing all parts of the whole.
Accepting without reservation the good and the bad and then actually realising that there are such shades of grey in everything and it's all ultimately about balance.
Marcus is a wealthy Baron from the Carpathian mountains he is under the influence of a curse that literally splits him into two parts mirror images of extremes.
Every day at sunset this occurs only to merge again during the day.
Courtney is the Nurse who goes to care for his beloved ailing mentor Sebastian and also the hopeful liberator of the curse that Marcus is currently living under.
There is loads of discipline, spanking and self-reflection to be had here as the two fall hard and Courtney contemplates breaking Marcus's curse.
I did sometimes find it difficult to connect to the characters as individuals and it also started slow but once I had got into it I did enjoy it.
I voluntary reviewed a copy of Taken by Night. 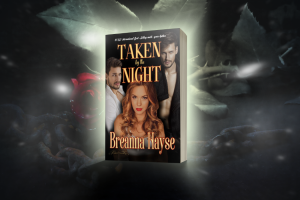 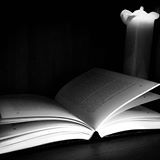 Claire Cronin
1,103 reviews11 followers
January 19, 2020
This was a nice little read when I eventually got into the story, but it did take me a little while to get into.

It's a different and intriguing story line, Courtney is a nurse providing care for those terminally ill, she works for an agency and gets contracts given to her, so she has no personal ties or commitments anywhere, no house or relations. She gets asked to go look after an elderly friend of a Baron Marcas Kalnovky, she signs the contract not reading it and not knowing what she has let herself in for.

It seems the Baron has a fetish for kinky art, one of the pieces he collected was cursed and was released upon him when he opened it, damaging his eyesight and literally tearing his soul in two. By day he is his whole self, by night he splits and become two, but they are the the opposites of each other and are constantly at war with themselves.

The Baron has been looking for the one woman who can release him from this curse, he believes Courtney is it. He wants her, but more than that he requires her submission. But Courtney lives for her control, relinquishing her submission is a difficult thing for her and is something she has never done. She is fiery and sassy and has no problem telling he Baron off or putting him in his place, usually swearing at the same time. The Baron does not take kindly to this and has Courtney over his lap on numerous giving her a good spanking!

Courtney ends up falling for the Baron, both sides of him, and is unable to choose between them, but she is determined to try and help him. But the cure requires a sacrifice, and that means her looking into her own fears and darkness within herself, she's not sure if she is willing to do that.


Ashley Carr, LSoR
3,884 reviews45 followers
October 17, 2019
This story had me glued to my kindle from the beginning. The characters are well developed in the storyline is intriguing. Courtney and Marcas have this explosive chemistry from the start. Marcas is cursed into split personalities while Courtney is floundering with the personalities. There is discipline, spankings, love, laugh out loud moments and romance in this gothic story. I can’t wait to read more from this author!!!
Riley
849 reviews55 followers
August 3, 2016
This book surprised me a bit. Pleasantly. I did not expect it to cause me to reflect on my on life so much. What you do if you had to face - literally - that aspect of your own character that tends to annoy you, or that you suppress, or that you try to ignore. Would your life be better without that aspect or would it be worse?

Don't worry, there is a lighter romantic side to this book also. It is sweet and serious and funny too!