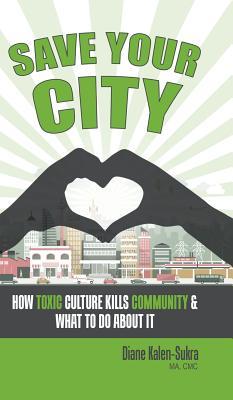 Save Your City: How Toxic Culture Kills Community & What to Do About It

4.40
10 ratings3 reviews
Rate this book
"Toxic culture" is eroding our sense of belonging, community, and well-being. Our capacity to collaborate and innovate together is also being undermined by the rising incivility and divisiveness. We need each other to address the complex challenges facing our cities and communities--from the infrastructure deficit to climate change, homelessness, mental health, and addiction issues. In order to thrive, our local democracies depend on our ability to revive the art of living and working well together.

Save Your City author and veteran community builder Diane Kalen-Sukra empowers community leaders and citizens to be part of the solution. She demonstrates what's involved by taking readers on a journey from "Bullyville" to Sustainaville," including an eye-opening visit to classical antiquity. The successful journey includes a renaissance of civic values and civic education as vital to fostering the kind of culture that can sustain us, our democracy, and our planet.

2 books2 followers
Diane Kalen-Sukra was born with the gift of encouragement and desire for everyone around her to thrive and meet their potential. Her core belief is that as social beings, we flourish in healthy sustainable communities, where good governance, servant leadership and compassionate culture support the well-being of all.

Today, Diane supports community leaders through her firm Kalen Consulting. She is an engaging and inspiring speaker, and a regular columnist with Municipal World. Her “civic academy” column covers everything from good governance and local democracy to sustainable community building, while she makes the case for greater civic education in society.

Diane is a graduate of University of Toronto’s Trinity College political science and philosophy specialist undergraduate program and holds a Master’s Degree from York University in political science. She has municipal law and administration training from the University of Victoria and is a Certified Municipal Clerk with the International Association of Municipal Clerks. Diane is a member of BC’s Local Government Management Association (LGMA) and the Government Finance Officers Association of BC (GFOABC).

4.40
10 ratings3 reviews
5 stars
5 (50%)
4 stars
4 (40%)
3 stars
1 (10%)
2 stars
0 (0%)
1 star
0 (0%)
Displaying 1 - 3 of 3 reviews
James Rozoff
Author 18 books15 followers
July 8, 2019
We’ve reached a point in Western society where the ways we have been doing things are clearly not making things better, and there are many who are earnestly analyzing the situation and trying to come up with solutions. Thoughtful, caring people who have not merely dedicated years but their lives to make our societies sustainable and healthy.

Save Your City is very obviously written by one such person. Diane Kalen-Sukra helps point out the problems that lie at the root of our dysfunctional governments and—increasingly—our communities. While such flaws are not all that difficult to discern and many have pointed to them already, they need to be pointed out by as many people as possible because the usual avenues of public communication are not doing their job: in fact they have become part of the problem.

Think about it: when was the last time you’ve heard Martin Luther King mentioned in any meaningful way on television or in the establishment newspapers? When was the last time you heard Tolstoy, Plato or Alexis de Tocqueville brought into a conversation as anything other than window dressing? As the author herself says, “You can learn a great deal about a society at any given time based on its literature…” Kalen-Sukra is not merely aware of these great thinkers and thoughts of the past, she has obviously reflected upon them and allowed them to shape her path in life.

The timeless values of various past cultures are woven together here with important contemporary voices such as Gabor Maté and Thom Hartmann in order to analyze the problems of the here and now. Sadly, for the most part our society is ignoring the wisdom of the past as well as those modern thinkers who are adding to our understanding of who we are as human beings in relation to our fellow humans and to the planet.

Pick up this book and read it, because we need a lot more people with the proper context if we are to turn our society away from the destructive path it is currently on and back towards one which understands what is required in order that communities and cultures can become healthy and sustainable once more. This is what it will take, ordinary citizens such as you and I with a desire to participate in functioning systems that serve not merely some but all of those who belong to or are affected by such systems. We’re all in this together, and Save Your City is an appropriate voice for that sentiment.
Donald Leitch
80 reviews3 followers
February 24, 2020
A number of books have been written about the growing incivility of our our politics. These works are primarily focused on national politics, particularly at the national level in the United States and the United Kingdom. Save Your City uniquely takes the discussion to the local government level. Diane Karen-Sukra skillfully assesses the challenges facing local governments, provides tools to diagnose the extent of the problem and offers solutions to move communities and municipalities towards a healthier, more sustainable political culture. This book is a worthwhile read for anyone concerned about the state of our current society, particularly as it affects the communities where we live.
Lindsey
5 reviews1 follower
April 26, 2022
Everyone should read this. It's a fast easy read.
Displaying 1 - 3 of 3 reviews