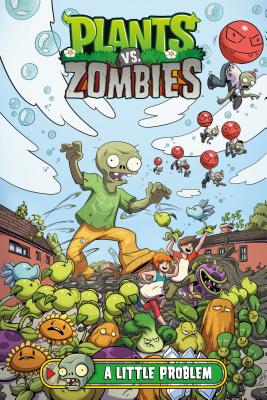 4.44
124 ratings7 reviews
Rate this book
Dr. Zomboss creates an army of teeny zombies to try and sneak up on all the brains in Neighborville!

To battle these miniscule menaces, the plants, Crazy Dave, Patrice, and Nate must shrink themselves to have any chance at defeating the zombies. But how will Neighborville's insects react to the invasion of their turf-of-the-tiny? And will this miniature zombie invasion mean the party for Crazy Dave's two-hundred-year-old pants gets cancelled? Don't miss the latest volume of the critically-acclaimed Plants vs. Zombies series that sees Eisner Award-winning writer Paul Tobin (Bandette) collaborating with artist Sara Ester Soler (Red & Blue) for this standalone graphic novel!

656 books366 followers
Paul Tobin is the Eisner-award winning, New York Times-bestselling author of Bandette, Colder, and many other comic books and graphic series.

Bandette, drawn by Colleen Coover, was awarded the Eisner Award for Best Digital Series in 2013, 2016, and 2017; and was a finalist for the Oregon Book Award for Graphic Literature in 2016. His original graphic novel I Was the Cat was nominated for an Eisner in 2015.

The Genius Factor: How to Capture an Invisible Cat , first in his five-book series of middle-grade books, came out in 2016 from Bloomsbury Kids. It was followed in 2017 by How To Outsmart A billion Robot Bees , and How To Tame A Human Tornado in March 2018.

4.44
124 ratings7 reviews
5 stars
84 (67%)
4 stars
20 (16%)
3 stars
14 (11%)
2 stars
3 (2%)
1 star
3 (2%)
Displaying 1 - 7 of 7 reviews
Zawar
1 review
November 23, 2022
This book isn't perfect, though it has a great concept and execution! The book tells the story of 2 kids, one of their uncles, and an army of plants and zombies, Zomboss and his zombies have the urge to munch on brains, but luckily Crazy Dave, his niece Patrice Blazing, Patrice's friend Nate Timely, and their arsenal of plants have come to stop their dining rampage. Zomboss makes a plan to have tiny zombies infect humans from the inside, Patrice and Nate realize this and shrink themselves (I won't tell you how because I forgot ;). I think their concept was great, having a miniature turf war while having to deal with Titan-like zombies and other things (bugs are as big as wolves and elephants, using more forms of transportation). I would recommend this to grades 2-6, it is not too complicated, it is funny and doesn't have content that would only be viewable by people of older ages. The characters are humorous and work well together, Nate Timely is the comidec character that loves food and wacky inventions, Patrice Blazing is the most sane and tactical of the 3 because she isn't making jokes all the time and she makes plans and is one of the reasons no one in neighborville has gotten dinned on, Crazy dave is wacky and technicologicly smart, and I should also mention the plants, they work as a tringle thing, Patrice can translate Dave and Nate likes his inventions and they are all friends! so yeah it good, there are some problems but I won't say them
Rob Worth
12 reviews
February 3, 2023
A very silly but fun comic. Zomboss has created millions of miniature zombies, so Crazy Dave shrinks himself, Patrice and Nate to combat the tiny brain eaters. They also run into problems with insects that are now twice their size.
Dahlgren General Library
4,006 reviews2 followers
Read
October 14, 2020
DA100000031109