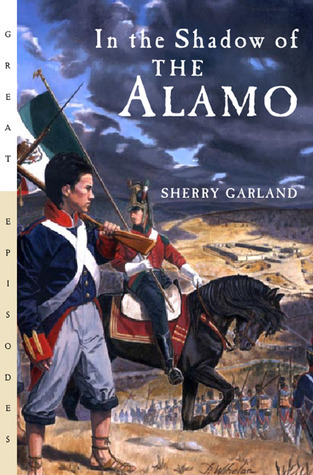 In the Shadow of the Alamo

3.86
56 ratings4 reviews
Rate this book
Fifteen-year-old Lorenzo Bonifacio never intended to be a soldier. But when the soldados raid his tiny Mexican village, Lorenzo finds himself forced to join General Santa Anna's army . . . all because of the pesky goatherd Catalina and the haughty Esteban Equivel, son of the wealthiest landowner in the region.
Taken under wing by the kind Sergeant Ildefonso, Lorenzo and Esteban endure boredom, exhaustion, and hunger as the army makes its way across Mexico to San Antonio de Bexar, where rebellious norte-americanos have barricaded themselves inside an old mission called El Alamo. Neither boy can imagine what lies at the end of the march--defeat, death, glory?--and neither can accept the price paid during the fight for Texas.

31 books54 followers
Sherry Garland is the award-winning author of 30 books for children, teens and adults.

3.86
56 ratings4 reviews
5 stars
19 (33%)
4 stars
16 (28%)
3 stars
17 (30%)
2 stars
2 (3%)
1 star
2 (3%)
Displaying 1 - 4 of 4 reviews
Abby Burrus
Author 1 book39 followers
December 24, 2022
This book presented a very interesting view of the Mexican side of the Texas Revolution. Interestingly enough, it doesn't seem that the Mexican soldiers were any more well trained or equipped than the Texas ones; the advantage they had over the Texans (it seems to me) was more men and generals.
I think this book is meant to be more of a children's book, though I'm not sure for what grades or ages. The descriptions were not overtly grisly or gory, but the fact is that it still made me uncomfortable in spots, and so I would recommend it for ages 13 and up. It is factual, sadly, but still not fun to read.
There is also mention of some type of witch-crafty type stuff that I also was not comfortable with, and unlike the violence, I think it could have been done without.
Overall, a alright book telling a not often told view point on an important event in history, but not one that I think I'm going to keep in my library.

Timothy Baldwin
Author 12 books20 followers
January 7, 2016
I loved this book. If you're looking for a good piece of historical fiction, this is it. Garland has done her research on the War surround the Alamo and has captured this experience though the perspective of a 15 year old soldier. Her narrator, Lorenzo, portrays a very believable teenager forced into fighting in a war in which he wanted no involvement. He experiences the gaining of a friend through one he once perceived as an enemy and he experiences the loss of those he cares for the most. In addition, a little teenage love interest begins to take shape sometime in the middle when he is forced to grow up way too fast. Overall, the character and his experiences are easy to relate to.
Rebecca
584 reviews147 followers
March 1, 2010
Nine years ago, Lorenzo's father was conscripted into the Mexican army, leaving behind Lorenzo, his little sister, and their pregnant mother. They never heard from him again. The year is now 1835, and life in their small village has not gotten any easier. Since his mother's death four years ago, Lorenzo has had to care for his two younger sisters. He believes the family is cursed and never expects to see his father again. While working in the fields, Lorenzo and some of the other village men are conscripted into the army to fight in the Texas campaign. Lorenzo, at fifteen, is too young to be conscripted, but the local landowner's son lies and says he meets the age requirement. Lorenzo is forced into a war he doesn't believe in, as his aunt and sisters join the other camp followers. Tragedy after tragedy follow on the long winter march to Texas. Their ultimate destination: the Alamo.

This book is an excellent young adult historical novel showing the "other side" in the Texas Revolution. The Mexican soldiers are portrayed as ordinary men who were forced to join the army and had no choice but to obey their superiors, even when they didn't agree with them.

April
206 reviews1 follower
December 18, 2010
I wanted to read it over and over again because it was really clever because I never thought about how the Mexicans got their soldiers and if they actually liked Santa Anna. I thought it was really well thought out and I want to read more of the GREAT EPISODES!! I would really recommend it to people who just really like to read things that make you think about the things this country has done in history. Maybe you want to read these things to get interested in something new. I also thought that if you are trying to learn the language of Spanish, then this would be a good book for you, because they throw in some of the words in that particular language, and it really helped me understand some of the language better, and to know when to run for my life if a Mexican yells it and starts running at me.
Displaying 1 - 4 of 4 reviews