Goodreads helps you keep track of books you want to read.
Start by marking “Uncle Dobbin's Parrot Fair (Newford)” as Want to Read: 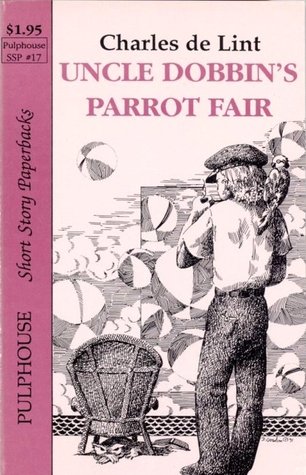 "The [Newford] books have all been written in such a way that you should be able to pick up any one and get a full and complete story. However, characters do reoccur, off center stage as it were, and their stories do follow a sequence."

When she was younger, Ellen had seen them all the time, bouncing in the wind like tumbleweeds. She called them the Balloon Men. Now she wonders if they really exist...

Reece knows he can see things other people can't, and he's running from a nightmare that menaces people with barracuda teeth...

Somewhere between Ellen's doubts and Reece's certainties lies Uncle Dobbin's Parrot Fair. Laced with parables, this Nebula nominated story has much to say about the nature of Magic.

To ask other readers questions about Uncle Dobbin's Parrot Fair, please sign up.

Jan 17, 2017 Geoff rated it liked it
This is a short story paperback that tells a little story of one person finding oneself, and another person who must discard his anger. It is the usual urban fantasy, but is a bit dark with some horror aspects. This is early de Lint writing and one of the first Newford stories. Jilly is the main character, and is very naive at this point. The story should be read for the significance of early Newford stuff, other than that it's just an average de Lint story. But I still enjoyed the story.

Sep 24, 2019 Vintagebooklvr rated it really liked it
Shelves: urban-fantasy
A look into the nature of magic.

May 28, 2012 Michelle rated it really liked it
A short story, I read this in "Dreams Underfoot". I was instantly mesmerized by the colorful characters "Uncle Dobbins" introduces us to and was quite swept away. I came away wondering what "bird" I have resonating inside me and if I am in danger of losing that inner song. This is a superb story about being true to who you are and how, you can fool everyone else - but you can't fool yourself. To quote a country song: "No Matter where go - there you are!" Loved it!

Dec 28, 2011 Jewels rated it it was amazing
Shelves: library
I simply love this little book. Stories within stories, and Charles de Lint's Newford folks show up too, if only by being mentioned in passing. I also love the twist at the end -- it just felt right. It's a quick read, but it will leave you with that feeling fluttering in your chest if you let it.

Jun 30, 2012 Aaron rated it really liked it
The first story in Dreams Underfoot, it was my first introduction into the world of Newford and to Jilly Coppercorn. This limited edition book has a proud spot on my bookshelf.

Jennifer Bradshaw rated it it was amazing
Oct 18, 2016

Born in the Netherlands in 1951, de Lint immigrated to Canada with his family as an infant. The family moved often during de Lint's childhood because of his father's job with an international surveying company, but by the time Charles was twelve—having lived in Western Canada, Turkey and Lebanon—they had settled in Lucerne, Quebec, not far from where he now resides in Ottawa, Ontario.

In 1980, de Lint married the love of his life, MaryAnn Harris, who works closely with him as his first editor, business manager and creative partner. They share their love and home with a cheery little dog named Johnny Cash.

Charles de Lint is best described as a romantic: a believer in compassion, hope and human potential. His skilled portrayal of character and settings has earned him a loyal readership and glowing praise from peers, reviewers and readers.

Charles de Lint writes like a magician. He draws out the strange inside our own world, weaving stories that feel more real than we are when we read them. He is, simply put, the best.
—Holly Black (bestselling author)
Charles de Lint is the modern master of urban fantasy. Folktale, myth, fairy tale, dreams, urban legend—all of it adds up to pure magic in de Lint's vivid, original world. No one does it better.
—Alice Hoffman (bestselling author)

To read de Lint is to fall under the spell of a master storyteller, to be reminded of the greatness of life, of the beauty and majesty lurking in shadows and empty doorways.
—Quill & Quire

His Newford books, which make up most of de Lint's body of work between 1993 and 2009, confirmed his reputation for bringing a vivid setting and repertory cast of characters to life on the page. Though not a consecutive series, the twenty-five standalone books set in (or connected to) Newford give readers a feeling of visiting a favourite city and seeing old friends.
More recently, his young adult Wildlings trilogy—Under My Skin, Over My Head, and Out of This World—came out from Penguin Canada and Triskell Press in 2012, 2013 and 2014. Under My Skin won 2013 Aurora Award. A novel for middle-grade readers, The Cats of Tanglewood Forest, published by Little Brown in 2013, won the Sunburst Award, earned starred reviews in both Publishers Weekly and Quill & Quire, and was chosen by the New York Times Editors as one of the top six children's books for 2013. His most recent adult novel, The Mystery of Grace (2009), is a fascinating ghost story about love, passion and faith. It was a finalist for both the Sunburst and Evergreen awards.

De Lint is presently writing a new adult novel. His storytelling skills also shine in his original songs. He and MaryAnn (also a musician) recently released companion CDs of their original songs, samples of which can be heard on de Lin