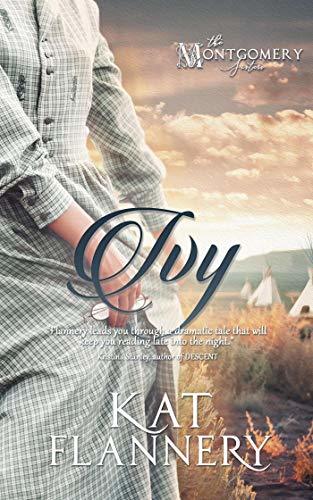 Ivy Montgomery is tired of her sister's constant nagging and protectiveness. Blind, she decides to escape in the middle of the night when she is captured and brought far from home. With no understanding of the outside world, Ivy must use her keen abilities to navigate the wilderness around her. Anger and hopelessness are her only defenses against the things she cannot do. Until she meets a strong-minded Lakota Chief, who will not let her cower to the blindness any longer.

Lakota Sioux Chief of the Paha Sapa, Hotah is on a hunt for his brother, Kangi. Cast from their tribe five years before, Kangi has grown a dark spirit and a hatred for all white people. Now on reserved land, Hotah makes a deal with the General to capture his brother in return for his people to have the provisions they need.

After rescuing Ivy, he promises to take her home, but danger is near and Hotah soon realizes it is not just his brother he should fear.

15 books347 followers
Kat Flannery’s love of history shows in her novels. She is an avid reader of historical, suspense, paranormal, and romance. When she’s not busy writing, or marketing Kat volunteers her time to other aspiring authors.

A bestselling author, Kat has been published in numerous periodicals throughout her career, and continues to write for blogs and online magazines. Her books have been on Canadian, USA and International bestseller lists.

The BRANDED TRILOGY is Kat’s award-winning series. With seven books published, Kat continues to write and market her books.

My third book by author Kat Flannery, the story showed the tough times for the native Indians who had to leave their land and make life elsewhere. In such prickly times, two hurt individuals found themselves along with an orphaned baby and Hotah's niece. Love blossomed quickly along with an insta-family.

The story developed well in some parts where Ivy's capabilities were shown. In spite of being visually challenged, she could manage to fend for herself and the baby on the wild lands. Hotah provided the support and the confidence she needed.

Her sisters seemed overprotective and babied her to the point of keeping her a prisoner, though I failed to understand why. Both the previous books showed them to be independent and intelligent far beyond their times.

The story has its twists with the wicked brother and the final fight with the general before HEA. At less than 200 pages it gave me a short story about the last sister. Overall, a good read.
Stephanie Jane
Author 1 book226 followers
July 6, 2019
See more of my book reviews on my blog, Literary Flits

Ivy is the third novella in the Montgomery Sisters trilogy. It begins similarly to Poppy in that we first encounter the eponymous sister isolated from her family but, in this case, Ivy's attempted escape from her overprotective sisters has gone very wrong. Ivy suffers from extremely poor eyesight - perhaps cataracts? - so Flannery explores her experiences of living at that time. I found this interesting, but wasn't convinced by Fern or Poppy's treatment of her. In the first two books both the older women had seemed keen for themselves and other people around them to strive for their full potential, regardless of any hindrances. Yet suddenly, now, they are apparently keeping Ivy hidden away and not allowing her any semblance of independence.

Ivy's rescue by a Native American Sioux chief allows her a brief insight into what she could achieve if she allowed herself to believe in her capabilities. I can't say if the Native American life portrayal is historically accurate any more than I can the living with blindness. Both seemed fair and it was nice to have such diversity, but I think I wanted both situations to be explored in a lot more depth. Flannery did repeat herself in this novella, especially in reiterating Hotah's past anguish. The instalove didn't convince me - even with the addition of an instafamily! I did enjoy reading Ivy, but would have preferred the story to unroll over a longer timespan.

Laura
3,173 reviews315 followers
July 20, 2019
Three sisters who basically have raised themselves in barely settled territory. The first two have proven themselves strong but found love and have decided to remain together, since Poppy and her husband may travel together as Pinkertons. Ivy, the youngest, has been isolated and pampered by the elder sisters, as her sight has been declining. However she is made of just as stern stuff as the other two. The trouble is they have grown used to not seeing her as capable.

Hotah, chief of a local Sioux Indian tribe, has always been a proud, strong warrior. He has always had the best interests of his people at heart. He trusted the U.S. government when they said his people would be taken care of if he cooperated. Family loyalty is strong among his people's beliefs.
His brother became a renegade, mentally unstable when his wife died, and did not join their people on the reservation. Soon the time came when Hotah has to make another difficult choice, and agree to find his brother, in exchange for the tribe to get the previously agreed upon provisions and care.

It is during this time when Hotah finds himself rescuing Ivy and having to choose which ultimate sacrifice is the least painful road.

I will be honest and say that I did not enjoy this book as well as the first two. The writing is still high quality and the story kept my interest, but it did not grab me as emotionally as the first two books of the series. It is a more difficult book to read, but clearly showed the parallels between the imprisoned lives of both main characters.
Amy
5,275 reviews
July 29, 2019
Ivy is the third installment from Kat Flannery’s The Montgomery Sisters series. This one is by far my favorite of the series. It tells the story of Ivy Montgomery, who is being smothered by her protective sisters because she is blind. During the night, she leaves and is captured. She is bitter, angry and unable to deal with the outside world. She must find a way to survive without her sisters. She finds an unlikely ally, Hotah, a Lakota Sioux Chief. He shows her how to deal with her blindness and with her surroundings she can not see. Hotah becomes Ivy’s protector and vows to bring her safely home. Only danger lurks ahead for them.

I enjoyed Ivy’s story and loved getting to know her. I admired Ivy’s bravery and courage. I loved Hotah so much more! He is the kind of hero I am delighted to read in a good story. Even thought Ivy and Hotah are complete opposites, they both have their struggles they need to conquer. It was great to have them interacted. They seemed to be stronger individuals when they were together. I was rooting for them all the way to the end.

I would love to give Ivy one hundred stars if I could. It is that good. I highly highly recommend this book for readers who love a good, well written and romantic historical fiction. It is so very good and should not be missed. It is really short and it took me no time reading it in just a couple of hours. Miss Flannery has herself a new fan.

I received this book from the publisher. This review is 100% my own honest opinion.
Carla
483 reviews10 followers
July 22, 2019
In the third and final installment, we meet Ivy, the youngest Montgomery sister. She is almost completely blind and has learned to rely on her other senses to flourish. While she is a strong, young woman with a lot of capabilities, her two sisters do not treat her this way. In fact, they often treat her like a child – ordering her to stay at home. While this is done out of love and fear, my heart hurts for Ivy as she craves freedom and trust.

This is how we find Ivy in the beginning of the novel – trying to escape the constraints of her sisters but she ends up lost and alone in the wilderness. When all looks hopeless, Hotah (the Lakota Sioux Chief of the Paha Sapa) comes to her aid. He is on his own mission but there is something about Ivy that he is drawn to and he puts his own task aside to ensure she finds her way home.

Along their adventure home, we learn more about their history – the pain, the betrayals and the forgiveness. Your heart hurts for both of them, who have experienced pain we cannot imagine but who are still moving forward to a place of healing. They find strength, healing and love in each other and your heart smiles for them. But will this be enough? Will they make it to safety and find acceptance? This was a definite must read ending to this series of strong, independent female characters that you can’t help but love.
Displaying 1 - 5 of 5 reviews