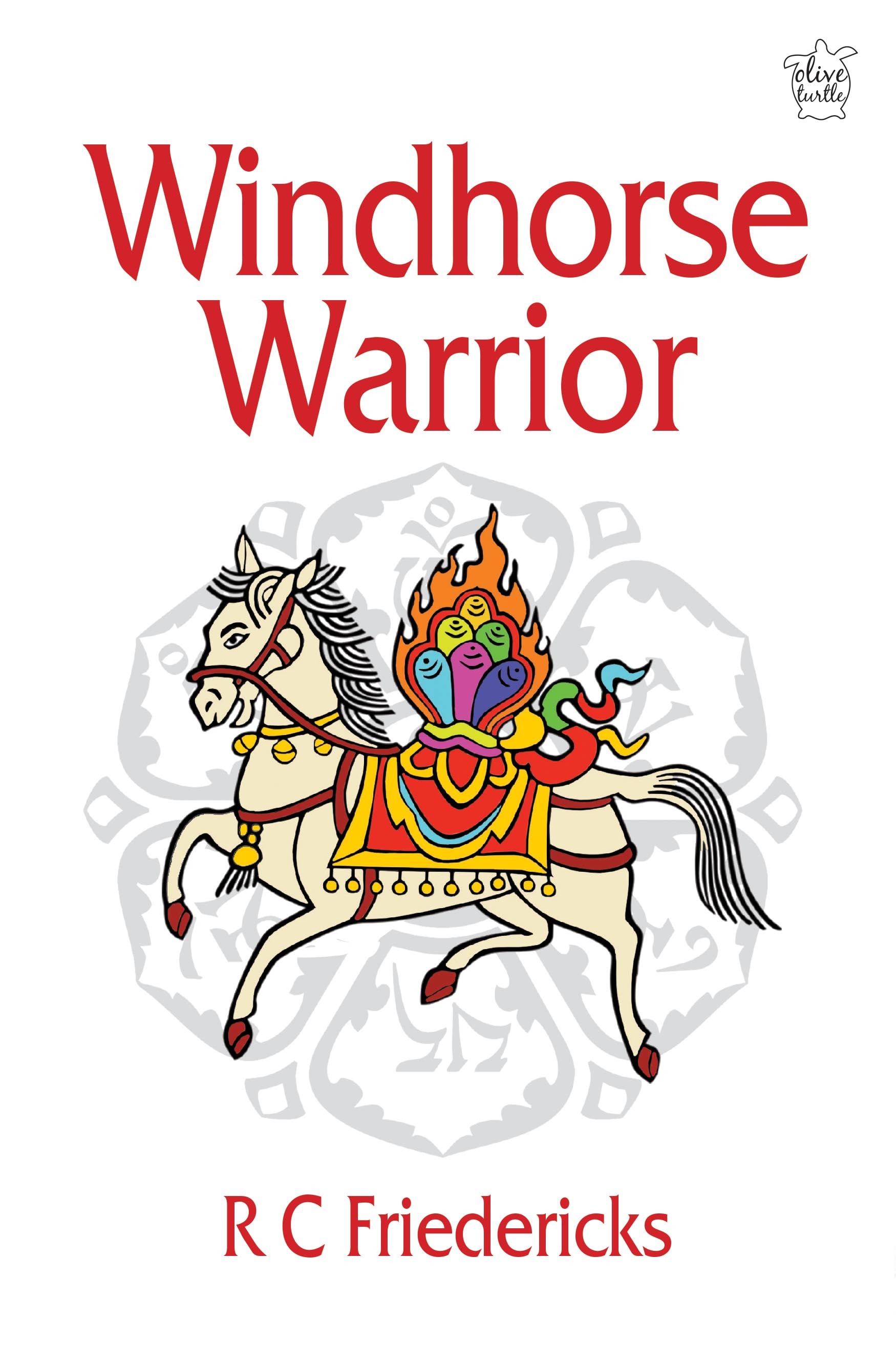 4.60
10 ratings7 reviews
Rate this book
Windhorse Warrior offers an inside look at the struggles and aspirations of the Tibetan people during the 1950s. It is a tale that weaves together the politics of occupation and resistance, an other-worldly romance between a Chinese communist and an educated Tibetan woman, and the soaring vision of the Tibetan spiritual heart.
Chuang Wei Ming, a young zealot from Shanghai, arrives in Lithang—on the eastern Tibetan plateau—with a mission to prepare the people for Maoism but soon outgrows its limiting worldview. Chuang falls in love with the beautiful and intelligent Dechen, who introduces him to the richness of Tibetan Buddhism. Palden Rinpoche, Dechen’s spiritual teacher, includes Chuang in their plan for a general spiritual awakening based on the Legend of King Gesar of Ling. Together, they pursue a pure communism infused with Buddhist teachings to create an ‘enlightened society’.
This is a story that extends beyond the decade in which it is set. Its message is true today in the global context of oppression and disparity, fake news, and injustice. Those who believe in a just and beautiful world will find themselves longing for an ‘enlightened society’ filled with spiritually awakened women and men, free to pursue their true potential and eager to enrich the lives of others.

4.60
10 ratings7 reviews
5 stars
6 (60%)
4 stars
4 (40%)
3 stars
0 (0%)
2 stars
0 (0%)
1 star
0 (0%)
Displaying 1 - 7 of 7 reviews
David R
2 reviews
November 7, 2018
A truly inspirational book. R C Friedericks delivers a superb story full of excitement, deep spiritual insight, and hope. I throughly enjoyed reading this book and believe it is a “must read”. At a superficial level the story is action packed, full of twists and turns and is a real page turner, but it also goes much deeper. RC Friedericks takes the reader on a journey of transition from the physical materialistic world into the inner world of spiritual transcendence and purpose. The writing is accessible at many levels. I highly recommend this book!

David Andrianoff
14 reviews2 followers
January 16, 2019
I found Windhorse Warrior a thoroughly engaging read. When and if I put it down, I could not wait to pick it up again. I found my heart gripped as I empathized with the main characters. I wept with Chuang’s broken heart. Later in the book I saw Chuang’s heart gradually begin to open up again.

Windhorse Warrior provides insight into Tibetan reaction to the Chinese take-over of their country. Sent to propagate Chinese interests in Tibet, Chuang sought to understand Tibetan culture so he could more effectively serve the Chinese purpose in Tibet. In the process, Chuang found himself drawn in by Tibetan culture. In remaining faithful to his mission, he often confronted Chinese heavy-handed methods. In the face of numerous pressures, conflict, and Chinese intransigence Chuang increasingly identified with the Tibetans.

In Windhorse Warrior we can look into Tibetan minds and souls. Friedricks clearly articulates Tibetan society and spirituality. He provides an insider’s perspective on the early conflict between Chinese aims and Tibetan culture. At some points compromise seemed possible, but lust for power was too much to preserve culture. I feel that I have gained much more empathy for Tibetans.

I cannot recommend this book highly enough!
Claire Beery
1 review
March 22, 2019
Windhorse Warrior elegantly combines the elements of a Himalayan adventure story, the history of Chinese Communism in Tibet, metaphysical and cultural Buddhism, and a highly unusual romance. It is set during the forced transition of Tibetan society from a traditional theocratic state ruled by powerful families to collectivization by the Chinese Communist Party and occupation by the People’s Revolutionary Army. Beginning in 1947, the dramatic historical events are told by the narrator, Chuang Wei Ming, as he is transformed from an idealistic Party devotee into a Buddhist and hailed as the manifestation of the legendary 11th century King Gesar, who brought justice and happiness to the Tibetan people.

Friedericks does a masterful job of portraying Wei Ming’s gradual change of mind and heart. Ming understands the Party’s thinking and objectives. He also develops a deep understanding of traditional Tibetan ways and respect for his Tibetan friends and associates. They, in turn, awaken to the need for some of those traditional ways to change. As a result, together, they achieve great success in creating a new collective society.

One of the most compelling elements in this story is the role of two strong Tibetan women who bridge the old and new with intelligence and passion and are the catalysts for Wei Ming’s transformation. Dechen and Yangchen also play essential roles in bringing about the transformation of the Tibetan way of life.

I came away not only entertained but also educated and inspired about a part of the world I’ve long been fascinated by. Friedericks’ deep knowledge of and affinity with the Tibetan people and Buddhism is evident throughout.

Although I looked for a deeper treatment of the flaws in traditional Tibetan society and had to suspend disbelief during some of the more metaphysical passages, it was impossible not to be swept up in the dramatic and uplifting message of the story. The Golden Way is a lesson for all times, especially our own.
Uday Singh
Author 2 books8 followers
November 19, 2018
Before I finally started reading this book, I didn’t have any clue about what this book might hold. But this book gave me a beautiful unconventional story. And you get to feel the story of struggles and emotions of locals in this story like nowhere else.

Made up from real experiences, this book is a work of fiction that will make you believe in the story as if all the characters were real. We get to see the life and struggles of the people of Tibet. The country has had a long and troublesome history of its own and the people had lived for generations going through those only.

It offers an inside take on a gander at the battles and yearnings of the Tibetan population amid the 1950s. It is a story that weaves together the legislative issues of occupation and obstruction.

If you want to explore historical incidents and how other cultures work, this is the book for you.

Mary
703 reviews2 followers
April 15, 2020
This book was written by Richard Friedericks, a classmate of Carlton's at boarding school in India. Richard spent most of his life living in China. The story is told from the point of view of Chuang Wei Ming, a Chinese communist. When his university girlfriend, Jiachen, is martyred, Chuang dedicates his life to spreading the ideals of communism. He goes to Tibet where he meets a girl who looks exactly like Jiachen, whose name is Dechen. Chuang tries to set up a series of co-ops and is absorbed into the Tibetan culture, including Buddhism. After becoming a Buddhist, Chuang's name is changed to Chodak. Still a believer in communism, Chodak and Dechen try to integrate the two beliefs. Is this even possible? Well written and researched.
Aishwarya Rathor
271 reviews21 followers
November 29, 2018
The plot is set in 1950 exploring the opposition between Tibetian and Chinese communists.
Chuang travels to Tibet to make residents of Lithang aware of Maosim. He is keen to know about communists. The book takes the reader through a journey of struggles and inequality between communists and Buddhists.
He falls in love with a girl who gives him an insight of Buddism. With her teacher, Chuang, creates an 'enlightened society'.
The author has beautifully written the characters, they seem real.  The narration is good. The story is long and grasping.
Susan
10 reviews
March 2, 2020
This novel works on so many levels. It is a great romance with amazing characters. It is a history of Tibetan Buddhist thought. It is a deep exploration of subtle cultural genocide. It’s a wonderful though challenging read.
Displaying 1 - 7 of 7 reviews