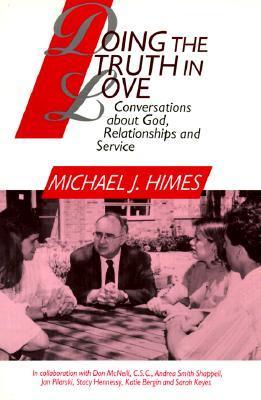 Doing the Truth in Love: Conversations about God, Relationships and Service

4.42
196 ratings16 reviews
Rate this book
A basic and engaging theology of God/human relationships and service to assist readers in reflecting more faithfully and more theologically on their own lives, particularly if they are involved in pastoral ministry or service projects. +

Michael Himes beautifully integrates literature, philosophy, and theology to explore some of the fundamental tenets of the Catholic faith and the role of the individual in manifesting agapic love. By retrieving several lesser known Biblical passages, he tells the same tale of a call to compassionate living in a new way. Himes does not make assumptions about Christianity, but instead chooses to explain the revelation of Christ carefully. I most appreciated his frequent admission of the finiteness of our being, conceding to let the mystery be a mystery to us.

Jaxson Schneider
9 reviews1 follower
June 8, 2021
Essential reading for Catholics and anyone who struggles with the dogma of the Catholic Church.
Aubrie Hatch
32 reviews1 follower
October 31, 2022
i’ve never been more confused in my life
Patty
8 reviews4 followers
May 16, 2011
This book was recommended to me by my uncle, who was a priest for nearly 30 years. There is so much "good stuff" in this book, I often found myself putting it down after only reading a couple paragraphs so that I could really digest what Fr. Himes was saying. A few points that really hit home for me:

"We are called to work with God in creating order out of chaos. When we confront the enormous problem of pain in our world, we must recognize that God has created us as co-creators who are supposed to be working with God to relieve suffering and grief." (p. 74)

Jesus gave himself away and we should too - "If you give your life away, you will see it become everlasting life - is is precisely what we claim about the death and resurrection of the Lord: having given himself away perfectly, he lives absolutely. He lives now to die no more." (p.78)

There's much more to take away from this book, but I'll let you discover it for yourself.

Richard Bradley
75 reviews
February 13, 2022
If you think you know what it is to be a Roman Catholic, read this book and think again.

This is a very upsetting book, upsetting in a good way.
It less so by the end than at the start, but still shakes the of everything from God to the Church. I need to read this at least twice. I have many questions I would like to ask Michael. Everyone should read the book, and see need to have a global discussion.
In fairness, I went to grammar school with Michael. I haven't seen of spoken to him in 61 years. He was brilliant then, and even as a kid he loved to make people think by what be said whether it was of religion, or music, or literature.. I still see a lot of that boy who said be wanted to be a priest in the man who is the priest. I always thought be would eventually be a Bishop, but it looks like he is much more important than that. Thank you Michael.
Clare
116 reviews7 followers
February 23, 2020
Read it, yo! Align yourself, your love of God, & your love of neighbor. In PRACTICE.
Alondra
40 reviews
December 14, 2020
This book will for sure make you expand the way you think about your faith. I highly recommend.

Hannah
148 reviews1 follower
November 11, 2011
We read this book in my senior Theology class. I really liked Michael Himes's approach to different topics in the Catholic faith, and it really challenged our class to reevaluate how we view the Catholic Church and its teachings. Himes begins his book by discussing how we need to understand God as mystery, agape, verb, relationship, and community, and then he later discuss how the least wrong way to think about God is to think about Him as agapic love, rather than a something or someone "out there." He has an interesting take on the prodigal son story as well as how we view heaven and hell. (He uses Gregory of Nyssa's explanation of heaven and hell.) Himes also addresses the difference between orthodoxy and orthopraxis, the temptations we face as humans, and how ultimately our restlessness is our greatest characteristic as human beings. He makes a distinction between satisfaction and joy and also discusses topics as vocation, conversation, evil, and the difference between religion and theology. His claim that Jesus was a "failure" initially led to some heated class discussions, but eventually most people saw where he was coming from. Lastly, he again revisited the importance of love and used some of St. Aquinas's teachings to talk about love, as well as Martin Buber's I-it and I-you relationships. Overall, I really enjoyed this book because it helped me look at things in news ways, and it was interesting to see different interpretations of things in the Catholic faith that have always before been taught in a black and white manner.

Sellmeagod
85 reviews8 followers
July 25, 2014
One of those that takes a closer look and you didn't realize what you were reading in those old parables. Such a simple perspective yet deeply theological (which is his whole point with living life). The final chapters are less revelatory and poorly edited, the personal reflections are nice but not especially insightful, and the random pictures are...there. However, there's few more practical books o' faith ideas - one you'll have immediate application when the neighbor cops out with the meaningless consolation, "I guess that's just God's will."
Meg
15 reviews3 followers
February 2, 2011
This book is a BRILLIANT exposition of the major themes of theology. It is a concise comprehensive theological read, seemingly meant for Jane Churchgoer, but also appealing to Jane Theologian, PhD. Highly recommend.
Nathanial
236 reviews42 followers
Read
February 25, 2012
Asceticism as a method for seeing the truth for what it is, and discipline as a practice of acting on that truth, especially in social service. Trinity as relationship, God as dynamic, and Church as mission.

Kate
262 reviews4 followers
January 5, 2009
Extremely thought provoking- can't read in 1 sitting. Read it like a text book, allow yourself to process!
Katie
3 reviews
September 26, 2009
Definitely one of those - read a chapter a month books because it's so dense.
Jack Dinkel
71 reviews
December 21, 2013
I didn't read it all, but the parts I did were profound and very helpful. Not flawless, but an accurate reflection of the form applied Catholicism should take.
Ryan
13 reviews
October 14, 2013
Breathtaking. This was only my first of probably many readings to follow.
Amanda Sie
47 reviews5 followers
January 6, 2017
AGAPE ETC