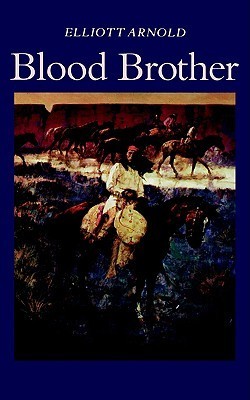 4.36
67 ratings19 reviews
Rate this book
A classic of Southwestern literature and the basis for the highly acclaimed 1950 film, Broken Arrow, Blood Brother is "a history in fiction form, of the Southwest, from the time of the Gadsden Purchase in 1856 until the end of the Indian wars, about 1870. The author has translated matter-of-fact historical incidents into thrilling episodes, following the adventures of Cochise, noted chief of the Chiricahua Apaches, and Tom Jeffords, famous peace maker and Indian agent, with great detail.."-Library Journal "Elliott Arnold has written a historical novel about the Apache Indians.with a knowledge truly astonishing for its comprehensiveness. . . . [It is] authentic history, presented, however, with fictional vividness."-New York Sun "Blood Brother is dramatic, fast-moving fiction. It is superb history. It is excellent biography. It takes place with the major works on the American Indian."-Chicago Tribune

33 books5 followers
Elliot Arnold was an American newspaper feature writer, novelist, screenwriter, and became a feature writer with the New York World-Telegram. Among his books, Elliott Arnold is probably best known for his novel Blood Brother that was made into the acclaimed 1950 motion picture Broken Arrow and an ensuing 1956 television series of the same name. Among his other works, his 1949 biography of Sigmund Romberg was made into the 1954 musical film, Deep in My Heart.
Elliott Arnold died in New York City in 1980 at the age of sixty-seven. He was married to actress Glynis Johns.

The Chiricahua Apache lived in what eventually became southeast Arizona long before anyone else: before the Spaniards, before the Mexicans and before the Americans. They understood the country as no group of people since ever have. They lived with the desert, they did not try to control it or turn it into a replica of a greener place left behind.

But when all those new people arrived, the ones who claimed ownership, were the Apache consulted? No. Were they even considered to be human beings and treated with the respect any human should receive from another? No. They were seen as pests to be exterminated.

Okay, I'm getting ticked off yet again. Deep breath.....

The GR blurb for this book is taken from the back cover. Here is what else the back cover says:
Blood Brother is dramatic, fast-moving fiction. It is superb history. It is excellent biography. It takes its place with the major works on the American Indian." ~~ Chicago Tribune

The major events in this story are true. The details of Apache life were meticulously researched, even some of the conversations, especially a moving one between Cochise and Tom Jeffords, are authentic, according to the author's note.

This book brings the Apache leader Cochise to life again. We see how he struggled to find a way his people could survive the onslaught of the Americans, who just kept coming and would never go away.

We see Tom Jeffords, white man, who has a different attitude than anyone else: he wants to understand the Apache and tries very hard to help create what he and Cochise believe would be an acceptable solution for peace.

This book made me mad. It made me cry. It made me wish we could all go back to the beginning and start over: this time with wisdom, tolerance, and respect on all sides. How different things might have been back then. And how different they might be today.

Sincerae
Author 1 book88 followers
July 15, 2017
The movie Broken Arrow (1950) was based on this novel. It was the first Hollywood movie which didn't portray America's indigenous people as interlopers and savages. I nearly got the name Emma, but instead I was named after a character in the book and movie. My name is actually Apache I learned about 20 years ago, but mine is a variation of the spelling of the original name, Sonseeahray. In the novel if I recall correctly it's spelled Conseeahray. I read Blood Brother many years ago.

Based on actual historical events the novel, Blood Brother is far better and even more poignant than the old movie which can be seen below at the link. The movie was good for its' day but in these more politically correct times that the main Native American characters were played by none indigenous actors might be offensive:

https://www.youtube.com/watch?v=VOeQa...
Ted Hinkle
345 reviews1 follower
July 1, 2021
BLOOD BROTHER is Elliott Arnold's compelling read dealing with an infamous time in our western United States heritage. The story depicts the struggles of two legendary figures describing their bonding during a time of growth and conflict.
This entire review has been hidden because of spoilers.
Nocona Montgomery
21 reviews11 followers
June 9, 2021
After reading this book, all I can say is that I am speechless. I have found that every once in a long while I will come across an old book that definitely should have been considered a classic. This was one of those. The writing style was amazing and I was sucked in from page one. It gave me a new, more personal view of Cochise, the Chiricahua Apaches, and their struggle for peace. Elliott Arnold had an incredible span, with the book covering many years, but incredible detail too. This book has definitely become a new favorite of mine, and I don't bestow that title lightly. Overall, I can't get enough, and if you want something to read that you will remember many years later, this is the one.

Lisa B
54 reviews
January 11, 2009
I have read this book at least twice - they made it into a movie: Broken Arrow - many years ago. Love it - will probably read it again
Juenbug
23 reviews
August 25, 2010
Totally unexpectedly LOVED this book. I was sucked in from the first sentence. In a nutshell, this is a fictional telling of the story of Cochise, last great chief of the Apaches.

Dewayne Stark
564 reviews2 followers
January 1, 2019
My daughter gave me the DVD for the movie. The movie was flawed throughout so I had to read the book the movie was based on. The book tells a different story and since I recently moved tom Arizona where the story takes place I can see some of the movie scenery from my window. I want to visit Cochise's stronghold but it is 350 miles to the southeast from where I live.
marcia
356 reviews14 followers
December 18, 2019
although it took me a long time to finish I guess maybe I didn't want it to end. Just the very last few pages I dragged out. The friendship challenged both men and the conflict within about their bond was the most interesting topic for me. Loved averything about the book and maybe one of the books I reread,

P.S. Winn
Author 75 books342 followers
January 7, 2018
I really enjoyed this story that tells he story of the white man and the Native Americans in the struggle to get along in the years when the white man took over land that really was never their's. 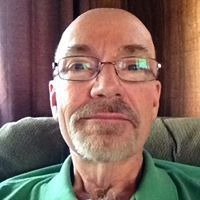 Roger Jones
1 review
August 1, 2017
A very moving tale of friendship.
Jennifer
5 reviews
January 6, 2020
I could not put this book down. A wonderfully written historical fiction for Southeastern Arizona.
Eduardo Parra
1 review
Read
October 16, 2020
good , tres bien
This entire review has been hidden because of spoilers.
Daniel Pitcher
Author 3 books1 follower
June 29, 2012
Okay, I'm not going to say this lightly...but this has just become the favourite book I have ever read. I really had trouble putting it down. Work, family and sleeping all became nuisances whilst I had this on the go, I found it that engrossing. In some respects I also found it life changing. Since beginning to read about the Native Americans I have been very struck by their remarkably healthy philosophy & their healthy outlook on life. I keep thinking that it was a shame the early Europeans and later American settlers didn't learn a few more things from them rather than forcing their own world view onto them.

Blood Brother is an historical novel that covers the life of Cochise, leader of the Chiricahuas and the Apache wars. The startling thing about this story is that it all happened, save one of the character's love interests that the author admits in his foreword was contrived out of poetic licence. Even some of the dialogue is as exactly how it was recorded at the time.

The copy I read belonged to my grandfather and nestled for years in a bottom drawer of a cabinet in the cellar of my childhood home. As a kid I spent many an idle moment viewing the illustrated Apache on the cover, imagining I was a cowboy about to shoot him with my six shooter. Ah, the ignorance of youth. Now I know a little more about the injustices the Native Americans suffered I would have taken up arms and joined their side. Anyhow...when I left home I 'adopted' the book and it's travelled along with me for the past 35 years; unread, until now. I'm glad I took it. Had I known how brilliant the writing and story were I would have read it a long time ago.

Katie McCandless
138 reviews2 followers
April 17, 2020
I feel like I don't have the critical tools to really do this review justice. Blood Brother was published in 1947 and is a fictionalized story about real events and a "friendship" (?) between real people: Chiricahua Apache chief Cochise and Indian agent Tom Jeffords. There are some beautiful passages about the desert landscape, and I suppose in 1947 may have been considered relatively progressive in its obvious effort to paint a humane and fleshed out portrayal of the Apache in the southwest. As a standalone piece of literature or historical fact, though, you won't be surprised to hear that this book hasn't aged particularly well. You can't really set aside the colonialism, white supremacy, sexism, and trope of the noble savage and instead just enjoy the story in the context of its time because the whole plot, premise and characters are built and rely on those structures. There are some good parts, and there are some pretty rough parts. So what's my role as a reader here? I don't think it's useful to throw this book out whole-cloth in the name of social justice, but neither do I think it's useful to tolerate colonialist, white supremacist, sexist bullshit in the name of historical context. Is it a valuable use of your time to learn more about what white men in the 1950s thought and felt about killing and removing indigenous Americans from the southwest? Probably not, right? But maybe it is? Parsing through the layered nuances of how to approach, let alone enjoy, a reading experience like this one is way above my pay grade. Stay in school, kids.
Siegfried Gony
31 reviews
January 14, 2013
Fred Freakoutski | 1 comments I like Ellen Melly, too. Some other good ones are Jim Stiles' book on Moab, Gretel Ehrlich "Solice in Open Spaces", William Kitteridge-Hole in the Sky, Ivan Doig-This House of Sky, Andrew Garcia-Tough Trip Through Paradise (as funny as Monkey Wrench but way different), Joy Harjo-How We Became Human, Mary Clearman Blew-All But The Waltz, and John Rember-Traplines. I hope this helps you get started down your own path of western writers.
Don
7 reviews16 followers
February 2, 2017
This was a great read and, sadly, a reminder of how self-centered we are as a nation. This book illustrates the worst aspects of the United States' treatment of Native Americans and at the same time, the best aspects of the way some individuals treated them.
Kathyg
184 reviews2 followers
September 5, 2011
Both hubby and I enjoyed.
Mills College Library
16.6k reviews
Read
August 15, 2014
Fiction A753b 1979
Paul
131 reviews
November 23, 2013
A sad and romantic tale of the old west.