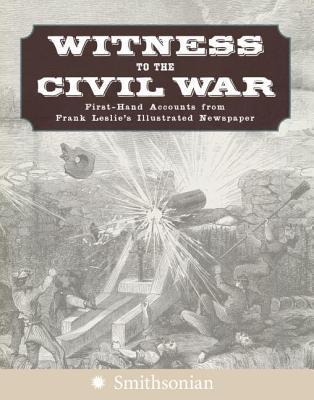 4.00
21 ratings2 reviews
Rate this book
For four bloody years, the Civil War ravaged America. Those at home could only imagine the sights and events overtaking their husbands and sons, fathers and brothers who were under arms.

Frank Leslie's Illustrated Newspaper was a primary source of information during those dark days. The reporters and artists who traveled with the armies were eyewitnesses to events, great and small, for their captivated readers. Sometimes the news was sensational. At other times it was tragic. But it was always eagerly sought after.

Here are the accounts, in pictures and stories, of those first wartime journalists. Here are their reports from the front lines. Here is the Civil War's news as originally presented to loved ones at home. Here you will find images of the battles, the leaders, the camp life, and of the soldiers who gave their all for North and South.

In your hands you hold the testimony of those who were Witness to the Civil War.

4.00
21 ratings2 reviews
5 stars
7 (33%)
4 stars
8 (38%)
3 stars
5 (23%)
2 stars
1 (4%)
1 star
0 (0%)
Displaying 1 - 2 of 2 reviews
Erwin
569 reviews1 follower
January 19, 2020
Frank Leslie published a newspaper during the mid to late 19th century that was known for its illustrations along with its stories. During the Civil War Leslie's newspaper was a staple for people to both read and see what was going on in the midst of the battles. Famous artists as well as the newspapers staff artists were on the scene recording what they witnessed.

in the original Preface to that edition here was the goal of the book:
“The pictures in this work have been reproduced from the original cuts made by Frank Leslie’s corps of war artists… They were drawn and engraved directly from sketches made on the scene of battle by the most famous artists of the time, and can therefore be relied upon as, absolutely accurate. They are really the most authentic war illustrations that have ever been published.”

And it continues...
“This description, with the graphic illustrations, will, it is hoped, bring about a better knowledge and a more correct idea of the Civil War than any yet presented to the public.”

This is a great book for anyone interested in the Civil War. The illustrations are superb and the captions accompanying them filling in the details of the war.
This book represents a very concise but also full history of the Civil War and its timeline.
I recommend it highly.

William P.
46 reviews
January 4, 2017
This book is a compilation of Frank Leslies prints used by the newspapers of the day. This was A.P.
of the era. Must have for any Civil War library.
Displaying 1 - 2 of 2 reviews