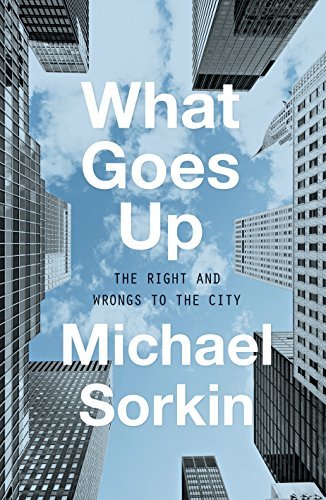 What Goes Up: The Right and Wrongs to the City

A radical architect examines the changing fortunes of the contemporary city

Michael Sorkin is one of the most forthright and engaging architectural writers in the world. In What Goes Up he takes to task the public officials, developers, “civic” organizations, and other heroes of big money, who have made of Sorkin’s beloved New York a city of glittering towers and increasing inequality. He unpacks not simply the forms and practices—from zoning and political deals to the finer points of architectural design—that shape cities today but also offers spirited advocacy for another kind of city, reimagined from the street up on a human scale, a home to sustainable, just, and fulfilling neighborhoods and public spaces.

Informing his writing is a lifetime’s experience as an architect and urbanist. Sorkin writes of the joys and techniques of observing and inhabiting cities and buildings in order to both better understand and to more happily be in them. Sorkin has never been shy about naming names. He has been a scourge of design mediocrity and of the supine compliance of “starchitects,” who readily accede to the demands of greed and privilege. What Goes Up casts the net wide, as he directs his arguments to students, professionals, and urban citizens with vigor, expertise, respect, and barbed wit.

50 books31 followers
Michael Sorkin (1948, Washington, D.C.- March 2020, New York) was an American architectural critic and author of several hundred articles in a wide range of both professional and general publications. He was the Principal of Michael Sorkin Studio in New York City, a design practice devoted to both practical and theoretical projects at all scales, with special interest in sustainable urban environments/green city architecture. He was also Chair of the Institute for Urban Design, a non-profit organization that provides a forum for debate over critical issues in contemporary urban planning, development and design.

From 1993 to 2000 he was Professor of Urbanism and Director of the Institute of Urbanism at the Academy of Fine Arts Vienna. He has been a professor at numerous schools of architecture including the Architectural Association, the Aarhus School of Architecture, Cooper Union, Carleton, Columbia, Yale (holding both the Davenport and Bishop Chairs), Harvard and Cornell (the Gensler Chair). He is currently Distinguished Professor of Architecture and Director of the Graduate Program in Urban Design at the Bernard and Anne Spitzer School of Architecture, City College of New York.

Dedicated to urbanism as both an artistic practice and a medium for social amelioration, Sorkin has conducted studios in such stressed environments as Jerusalem, Nicosia, Johannesburg, Havana, Cairo, Kumasi, Hanoi, Nueva Loja (Ecuador) and Wuhan (China). In 2005 -2006, he directed studio projects for the post-Katrina reconstruction of Biloxi and New Orleans.

4.00
31 ratings4 reviews
5 stars
11 (35%)
4 stars
11 (35%)
3 stars
8 (25%)
2 stars
0 (0%)
1 star
1 (3%)
Displaying 1 - 4 of 4 reviews
Lung Danut-Lucian
10 reviews
December 14, 2020
„For the past seventeen years, I’ve directed the Graduate Program in Urban Design at the City College of New York—the legendary CCNY, erstwhile “Harvard of the working class.” (We prefer to think of Harvard as the CCNY of the ruling class.) The college is part of a much larger institution—the City University of New York—which serves more than a quarter of a million students. It is underfunded, disorganized, a frequent political football, and occasionally a titanic bureaucratic pain in the ass. But it’s great in the way New York is great. We kvell over the peppy messages from the president’s office letting us know that more languages are spoken on our campus than any other on the planet. Graduation day is always incredibly moving, with thousands of immigrant parents celebrating the first in the family to receive a college degree. And lately, we’ve been actively instructed by our humane administration about which rooms—design studios, our offices—can be used to offer sanctuary to our undocumented students when Trump’s Gestapo tries to take them away.”
Ugh
514 reviews38 followers
September 22, 2018
I took this with me on a holiday to New York (from the UK), as a way of keeping myself occupied while also learning more about my surroundings in bite-size chunks mixing praise and criticism.

It worked reasonably well, keeping me occupied while I waited for food to arrive or rode the subway, etc. Standouts for me were the articles on Ground Zero and on how cities need to sustain a jumble of activities and styles side-by-side in order to be interesting and democratic.

It isn't always an easy read, however: Sorkin quite often writes in a verbose technical style best suited to the likes of professional architects and the novelist Will Self. Once I returned from NY, I tried to persevere with the second half of the book, which covers wider ground than NY, but decided I'd had enough once I'd read about half of that half.

So, I got what I wanted from it, but only just.
KT
340 reviews
February 10, 2021
Interesting and insightful collection of essays on architecture, urbanism and all things built.

The first part of the book is focussed on New York and may not be of interest to everyone despite the author's delightful, easy-to-read style although I particularly enjoyed the ode to Marshall Berman, making the case that streets are for the people, not the automobile and invoking Engels in arguing for a solution to housing inequality

The second part of the book is on general topics related to the city and buildings, and was especially insightful and enjoyable including:

The parallel drawn between the racist demonisation of the Japanese during WWII and the generalised Islamic other post-9/11 by the USA and allies to justify the destruction of their shrines and urban textures, in contrast to the victimhood of the "civilised" Germans killed in Dresden and Paderborn

An enjoyable account of a holiday with Zaha Hadid

The call for architects to organise together to assure equity and justice in architecture's effects and in the mode of its production
Katie
223 reviews13 followers
February 27, 2019
Michael Sorkin reads like a present-day Lewis Mumford: erudite, witty, passionate, cranky, occasionally obscure and sometimes overly intellectual. But all in all it's an interesting and wide-ranging disquisition on the potential and the fallibility of architecture and design. Most of the essays focus on New York, and I appreciated those parts the most. A lot of thoughtful and biting commentary on how New York's 21st century architecture reflects and even intensifies power dynamics in the city. The essays are each brief, too, which makes them useful as standalone readings for a class, or handy for a reader who wants to skip or skim.
Displaying 1 - 4 of 4 reviews