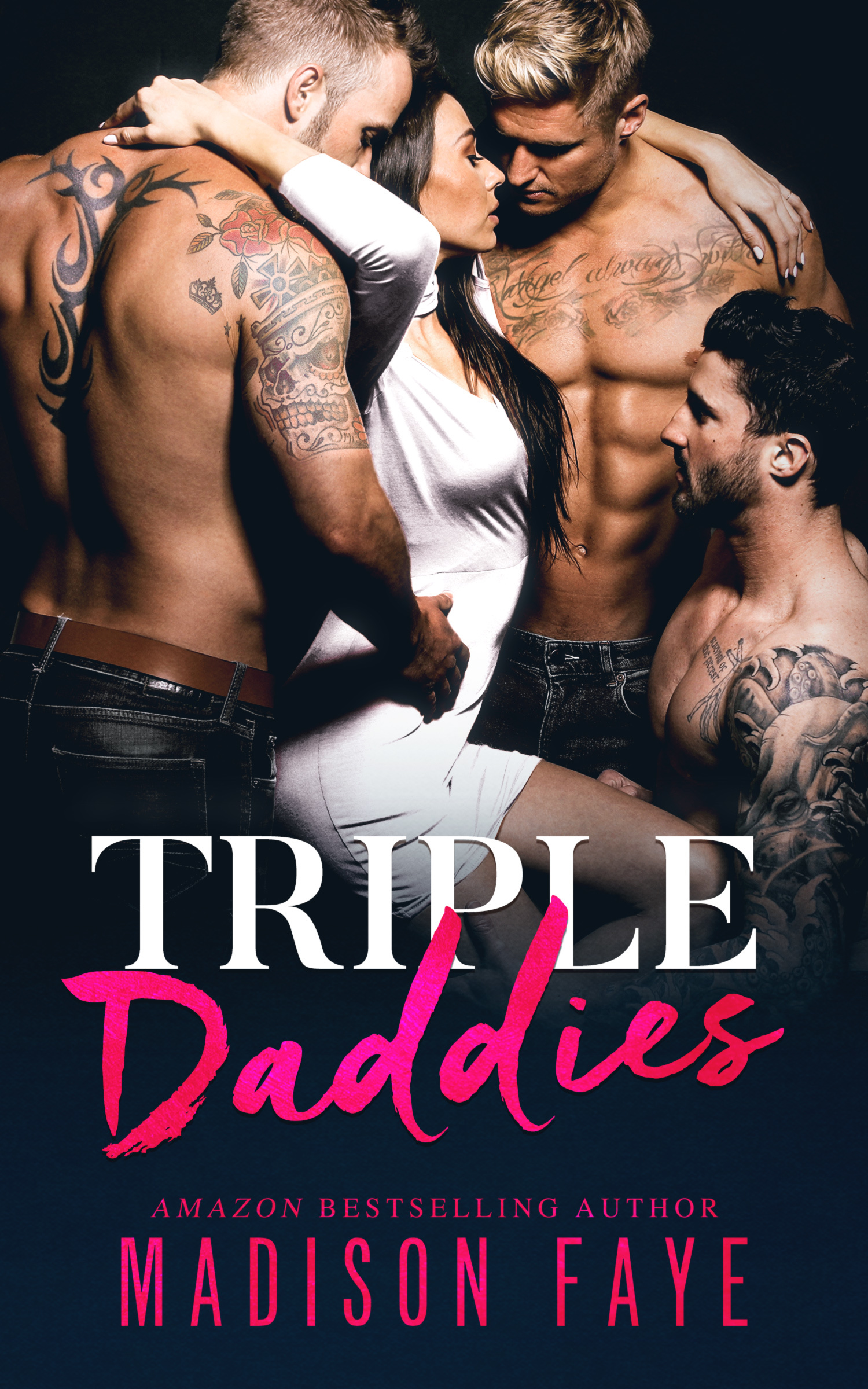 3.87
1,683 ratings178 reviews
Rate this book
Some brats like to break the rules
Boys, fast cars, and skipping school
But for dirty girls who flirt and tease
Sometimes big daddies come in threes…

She’s the forbidden fruit. The apple of temptation. The girl I never saw coming.

Too innocent. Too so-much-younger. Too much my student. Too much our student, actually.

Fate threw her in front of me. The feel of her lips on mine had me taking what I never should have touched.

…My inability to walk away from trouble had me saving her when I should have let it be.

But now she’s here in my house – me, her college professor. And it’s not just me either, there are three of us living here. Three big, rough, hardened older men – men twice her age.

…Men who can’t f*cking look away from the tempting little tease sleeping right down the hall.

But saving her or not, there are rules that she’ll follow under this roof. And when Cora Hartley decides she doesn’t need to follow them, she’s going to learn just how wrong she is.

Three men like us can only be teased and tested for so long, before she gets a firm hand of discipline.

Hang onto your tushies, we’re about to wild. Don’t show your friends this book, they’ll probably judge you. Luckily, I won’t, and my lips are sealed ;).

Alpha af, wildly over-the-top, silly, steamy, and sweet enough to make your teeth hurt. This mfmm romance is all about her – no m/m. Safe, no cheating, and a HEA guaranteed.

104 books3,375 followers
#1 bestselling contemporary romance author Madison Faye is the dirty alter ego of the very wholesome, very normal suburban housewife behind the stories. While she might be a wife, mom, and PTA organizer on the outside, there’s nothing but hot, steamy, and raunchy fantasies brewing right beneath the surface!

Tired of keeping them hidden inside or only having them come out in the bedroom, they’re all here in the form of some wickedly hot stories. Single-minded alpha hero, sinfully taboo relationships, and wildly over-the-top scenarios. If you love it extra dirty, extra hot, and extra naughty, this is the place for you! (Just don’t tell the other PTA members you saw her here…)

Smut pure and simple, if you like action this is it! NSFW...
A definite bedtime read... ;)

Madison Faye sure delivered a hot, new, bedtime-quickie romance that is guaranteed to heat up your kindle and leave you needing a pair of dry panties. Triple Daddies was full on insta-lust and all the feels in a short and naughty package.

Sexy. Sweet. Safe. Easy. Dirty. All the good stuff times three. Cora, Nolan, Garret, and Max lit up my kindle and had it practically overheating at times. Naughty fun. Irresistible alphas. One girl in need of them. You know how they say things come in threes? Well this is one scorching romance you do not want to miss!

I highly recommend this book.

Cora gets saved by Nolan at a bar. Neither knows that they are student and teacher.

When Cora needs a place to stay Nolan offers his house. But he already has two house guest.

This is an enjoyable story! I voluntarily read an advanced reader copy for my honest review.

Um to be quick this was a short fun hot RH story, and it's very cliche,
Kelly
371 reviews
April 2, 2018
Triple Daddies was deliciously wicked! I was sure my Kindle was going to catch fire a few times!

Naughty and dirty with a dash of sweet!

Loved seeing an appearance from Kenzie, Wilder and Lincoln for. Double Daddies.

April Symes
4,991 reviews403 followers
April 2, 2018
Triple Daddies by Madison Faye is the story of Cora, Nolan, Garrett and Max. It’s a sizzling hot MFMMM naughty ménage romance. Seriously, get ready for your kindle to get all kinds of steamy after reading Madison Faye goodness hits up your kindle. Cora is a sophomore in college who has lost her parents and was living with her grandmother but then her grandmother died too. Where the story starts is where Cora is crashing at various friends’ places or where Cora lives in her car. Then she ends up living with her ex-boyfriend but he wants more than she is willing to give. Cora’s ex gets physical with her one night and that night, she is saved by Nolan who brings her back to his house to stay. Thing is, he already has two people staying with him-- Max and Garrett. There is an instant and deep attraction between all the main characters in this story and this foursome had me rooting for them right away….especially when the ex-boyfriend was acting like a villain. What was super hot and fun for me was two of the men in this story was Cora’s professors from the college. This was a hot and steamy taboo…the student and the professors…along with older men and the young girl. Oh my!! This was one of my favorites by Ms. Faye. I cant wait to read more stories just like this from this author because the plot was tight, the characters were relatable and the chemistry was on point and steamy. Well Done and a Must Read!!!

Up All Night With Books
1,139 reviews36 followers
March 31, 2018
If you’ve ever read a Madison Faye romance than you know they are dirty, naughty and oh, so tempting! She excels in ménage and mfmm romances that will steam up your kindle in a heartbeat! You are in for one heck of a treat with Triple Daddies as it’s deliciously wicked and extremely entertaining!

Cora needs a little extra attention in her life as she has fallen on hard times. She has attracted one of her professors on a night out in a saving grace sort of way, but when he reveals he doesn’t live alone and that their are conditions… she learns first hand how it’s like to be cared for emotionally and physically by not just him but his roommates as well.

“I think this little brat needs a daddy,”
“Actually, I think she might be so naughty that she needs three.”

Professor/student fantasy? Make that a double with a ex-NFL player… look no further than this hot, high intense sexual book. Grab this little romance if you want to submerge yourself in taboo forbidden fantasy for a day… you won’t regret it!

**ARC provided by the author in exchange for an honest review**

Reviewed by Allyson, Late Night reviewer for Up All Night w/ Books Blog
PointedlyBlunt
389 reviews32 followers
April 3, 2018
Nineteen year-old Cora is homeless and after sleeping with her much older professor (she didn’t know it was him at the time) in a bar bathroom, he finds out and offers her a place to stay. His two best friends also happen to be staying with him at the moment and all three can’t seem to keep it in their pants around the girl.

There isn’t much of a plot other than some drama caused by Cora’s abusive ex-boyfriend. I’d estimate about 85% is sex, or some internal dialogue of a character thinking about sex, which quickly became repetitive.

I couldn’t connect with the h, because I knew very little about her other than she’s an orphan, lost her grandmother’s home, and has a magical coochina that brings all the boys to her yard. Seriously, every guy and his cousin wanted her.

All of the Hs seemed the same. I would have to go back and see whose POV I was reading from because they were so similar.

It’s not a deep book, but if you’re in the mood for some serious insta-lust, daddy play, and menage, then this is your goldmine.

I received an ARC in exchange for an honest review.
Jennifer
777 reviews
April 1, 2018
Short steamy stand-alone. Told in multiple POV with HEA. Nolan, Garret, & Max have been best friends sense childhood. They are now all living in the same house after Garret's broken engagement, and Max's career ending injury from the NFL. Nolan and Garret are professors at the local college. Cora is a sophomore in college and finds herself homeless and without any family after her grandmothers death. She is currently staying at an ex boyfriends but he wants more than she is willing to give. Cora's ex boyfriend is getting physical with her one night outside a bar and Nolan witnesses it and saves her then brings her back to his house. Things really steam up from there!! Her ex boyfriend tries to make trouble but that handled quickly and not dragged out. Super fun quick read!! ARC review.
Amber
1,471 reviews12 followers
March 31, 2018
I voluntarily reviewed an Advanced Reader Copy of this book
5 sign me the *bleep* up Stars!
Madison Faye has done it again! I loved Triple Daddies so much I couldn’t put it down( ok I definitely did because it was so hot that I needed a breather and to make sure my phone didn’t melt ;]) it was so dirty and I loved every second I loved Nolan, Garret, Max and Cora and I definitely loved their story (a little more than Kenzie Wylder and Lincoln’s) loved the connection between the two stories. Another Hit Madison can’t wait to read more
Sandra Singleton
6,183 reviews23 followers
April 3, 2018
https://www.amazon.com/review/RNZCXPL...
Lici
173 reviews43 followers
April 20, 2018
Liked that one more as the first one. But still 3 Stars.
Maida»-(¯`v´¯)-»
1,666 reviews421 followers
April 22, 2018
RATING: 2.5-3 Hearts!

The story was hot to read but storyline, nope none there. I knew from the title it was the whole call me daddy thing, but that is just too weird for me. Their first encounter in the bar was a joke. What professor goes to a bar he knows is filled with college kids, has sex in the bathroom and then thinks...oh I hope that wasn't a student, what!!!
lori
51 reviews
June 24, 2018
hot and sexy