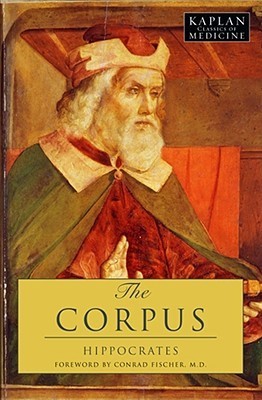 The Corpus: The Hippocratic Writings

3.56
41 ratings2 reviews
Rate this book
The Corpus of Hippocrates is a collection of early medical works written and inspired by the ancient Greek physician and his students. Containing lectures, research, and philosophical essays on medicine, the Corpus is one of the earliest medical texts in human history. With actual case studies from the ancient world, it's a fascinating peek into the history of medicine that aspiring doctors read to this day. Most prominent among its seventy essays is The Hippocratic Oath, a manifesto of medical ethics. Its preamble is still traditionally sworn by physicians before entering practice. It begins: ""I swear by Apollo Physician ... and all the gods and goddesses, making them my witnesses, that I will fulfill according to my ability and judgment this oath and this covenant.""

257 books174 followers
Hippocrates of Cos or Hippokrates of Kos (ca. 460 BC – ca. 370 BC) was an ancient Greek physician of the Age of Pericles, and was considered one of the most outstanding figures in the history of medicine. He is referred to as the "father of medicine" in recognition of his lasting contributions to the field as the founder of the Hippocratic School of medicine. This intellectual school revolutionized medicine in ancient Greece, establishing it as a discipline distinct from other fields that it had traditionally been associated with (notably theurgy and philosophy), thus making medicine a profession.

However, the achievements of the writers of the Corpus, the practitioners of Hippocratic medicine, and the actions of Hippocrates himself are often commingled; thus very little is known about what Hippocrates actually thought, wrote, and did. Nevertheless, Hippocrates is commonly portrayed as the paragon of the ancient physician. In particular, he is credited with greatly advancing the systematic study of clinical medicine, summing up the medical knowledge of previous schools, and prescribing practices for physicians through the Hippocratic Oath and other works.

Hippocrates, the Greek doctor from Kos who practiced in the 5th and 4th centuries B.C. is best known for the oath that takes his name. During a time when gods dispensed calamities upon Western man, he strove to refine and expand medicine into a professional art.

The Corpus, of questionable authorship, consists of various essays on medicine. Starting with the Oath of Hippocrates, the essays attempt to catalogue the science, practices and observations for future practitioners. Possibly with a medical background, the reader may appreciate the theories and conclusions Hippocrates draws from the symptoms he observes. For the layperson, most of the material will pass through undigested. It’s a clinical work. The Corpus, among other topics, covers symptoms seen in terms of imbalance in the four humours (blood, black bile, yellow bile and phlegm), bandaging techniques and contains over two dozen case studies of those afflicted in epidemics.

Hippocrates did not believe that disease could be explained away as divine retribution. Though I could appreciate Hippocrates refusal to align with his contemporaries who “use divinity as a pretext and screen of their own inability to their own inability to afford any assistance” pg. 100, On the Sacred Disease, I could only appreciate The Corpus as a historical piece. For its’ disciplined adherence to science and the transmittal of medical knowledge in a time when superstition reigned, it is most likely unparalleled. For its’ significance to the lay reader today, it is skim worthy.
Displaying 1 - 2 of 2 reviews