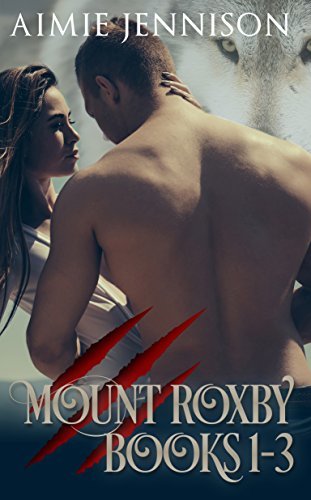 4.18
17 ratings4 reviews
Rate this book
Enjoy the Mount Roxby Series books 1-3 all in one ebook.

Theo Wilson lives for being an Alpha, but hurt in the past, he has no interest to find his love—until Bel walks into his town, seeking a new home.
Running from the pride she's been raised in, Bel has no other choice but to beg the sexy Alpha for a place in his pack—and possibly his heart.

Ruby Wilson had always been sure her destiny would lie with her brother's pack, especially because there are not one, but two wolves catching her attention. Sadly fate has a whole different plan for her.
Eddie has always watched Ruby Wilson from the shadows, but when her life is thrown into chaos, he can no longer just watch.

Cain Wilson left behind the only woman he's ever loved, the only woman he knew was made for him. But two years later, with his sister's life on the line, he makes his way back—and is surprised to find he has a second chance.
Selena has nowhere to go but back to her ex—and yet when she arrives there, Cain is back, and with him the feelings, the memories, the longing. Will they get a Chance at love or is this the final goodbye?

15 books138 followers
Aimie is a Yorkshire lass living in Australia. She is a mother to three boisterous boys, you could say four if you add her husband.
Aimie loves to read and write. Her favourite place to listen to her characters is at the beach.
Visit Aimie at www.facebook.com/AuthorAimieJennison

This is one of the favourite genre of mine Romance with the mix of Paranormal beings. Because it's always so much fun and interesting and on the same time its very thrilling to read. The characters are so strong. The story started with pain but then there is so much happening books by books. The old rivalry between the Werewolves and Vampires, but in a different way, I would say Aimie's way. Characters are written really strong and you know what the best thing I seen in the book series from Book #1 to Book #4 is that Author really improved in terms of writing by every book. That's the best aspect of any author -- improving in their writing.

I really had fun in this book series. Loved it!!!

I love these stories. Theo and Bel’s is my favorite. I wish we got more though. I felt it ended abruptly. I want to know if they let Selena stay and if Chloe and Bel had their challenge.
Ann-Maree Howarth
660 reviews7 followers
September 3, 2019
I will post my reviews of each book of this book set as I read each book them. UPDATED 28/08/2019

I have not read a shifter story in some time to which I thoroughly enjoyed this one. We have werewolves, vampires, witches, and Lion-shifters in this great story set in Australia. Rosabel is a werewolf that was raised in a Lion pride and from the age of 18, she had to fight for her life. She leaves the pride or you should day she ran from the pride and the man she loved to protect him from his future that he is destined to have.

She is a lone wolf searching for her pack to which leads her to meet Theo the Alpa male of his pack in a town of many dangers that will make Rosabel fight again but this time for more than just her life this time. For her new home.

I received an Advanced Readers Copy of this book and am voluntarily leaving my honest review. This is also the very first book by this author that I have read and will be happy to read the other books of this series to learn more. A great change of pace from what I have been reading. Loved it!

It has been a while since I read the first book of this book pack, but it has come at a time where I needed something different to read to catch my love of reading again. I picked up this book last night, read until the words went blurry than I picked it back up at 5 am until I have to leave the house.

I had my interest from the very start gave me a little unexpected drama that I did not see coming but some I did but still enjoyed the journey to get there. It was great to be back with some of the characters I had already read about and was soon relieving the story from the first book.

In this book, we get to know Ruby Wilson the younger sister to Theo the Alpha male to the werewolf pack. Ruby just joined us at the end of "Pride to Pack" so we will get to read her story and learn more about the Wilson family as well. Ruby has arrived at her brother's place to get away from her mother and to spend more time with her brother Theo. She is the only one of the three siblings that never go the werewolf gene, she was a human in a pack of wolves.

She was protected just like a member of the pack as her brother was the leader, but it was a protection she earned with all the members. She has started to get one with her life and had many plans for her future until one night when that world changed forever. A world that may never be the same again.

The story is told by many POV's that bring a different view of what is going one in Ruby's world. The world of the paranormal with Villians, danger, heartache, death, marriage, babies, mates, hope, forgiveness but most of all drama. It will keep you totally entertained with every word by this great author to the very end. Than starting book three straight away to see where this full story is going and whom we will learn more about next.

Reclaiming the One, (Mount Roxby #3)
We will finally find out why Cain Wilson left Mount Roxby, his brother, his pack and many more questions this character had left us with from the first two books. This book will give us more insight into the history of Theo and Cain as well as Selina. I have when a character you dislike grows on you and by the end, you are very much liking them, this is how I feel about Selina. I never really liked her from the beginning in book one, but as we learn her true history as well as Cains we will get a better understanding of why?

Cain left this pack and family a few years ago after he killed his father in a duel and handed over the pack to his brother to run as the Alpha Werewolf that he truly was. Cain has been a lone wolf all this time but has helped out a few people on the way. He returned in the second book when his sister needed him the most but he has found out he is wanted and need back with his pack.
The one person he never thought he would see again was his brother's ex-wife Selina who is living in the packhouse with his brother Theo’s and his new Mate Bel. What will happen when he is faced with his past? Will he come clean with everyone involved?

Selina is in need of help not only for herself but for her future as well so she is back with the one person that can protect her Theo her ex-husband. But what will happen when Cain walk through the front door again?

This book is full of Werewolves, vampires and many other shapeshifters, pack drama and personal drama for the Wilson family. I feel this book bring book one and two together a little bit more and makes me look forward to the next book in this great series. I have read book two and three in the straight concession as I could not get enough of this world to stop after Forever Young and Beautiful. Reclaiming the One is a very accurate title for this very moving paranormal romance story.
Displaying 1 - 4 of 4 reviews