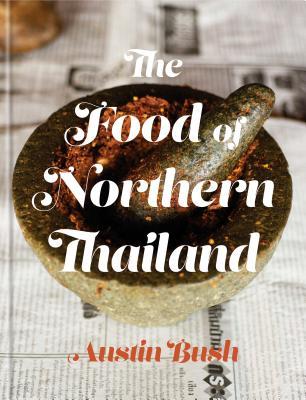 The Food of Northern Thailand: A Cookbook

4.06
54 ratings8 reviews
Rate this book
JAMES BEARD AWARD FINALIST - Welcome to a beautiful, deep dive into the cuisine and culture of northern Thailand with a documentarian's approach, a photographer's eye, and a cook's appetite.

Known for its herbal flavors, rustic dishes, fiery dips, and comforting noodles, the food of northern Thailand is both ancient and ever evolving. Travel province by province, village by village, and home by home to meet chefs, vendors, professors, and home cooks as they share their recipes for Muslim-style khao soi, a mild coconut beef curry with boiled and crispy fried noodles, or spiced fish steamed in banana leaves to an almost custard-like texture, or the intense, numbingly spiced meat "salads" called laap.

Featuring many recipes never before described in English and snapshots into the historic and cultural forces that have shaped this region's glorious cuisine, this journey may redefine what we think of when we think of Thai food.

This book is interesting as a record of a cuisine most Americans never see (as opposed to the food in most Thai restaurants), but I don't think too many people would actually want to eat (let alone make) most of these recipes, and there are some hard-to-get ingredients for some of them.

The format is also wonky, but it's at least consistent so if/when you get used to it, it'll be fine.

The recipes the author chose, the photos, and the explanations and cultural digressions were all good (quite good, in fact), but ultimately, as a cookbook, I can only like it just so much.

Gabrielle
64 reviews1 follower
July 21, 2019
This is a beautiful book that I'll never cook from. In the intro, Bush is up front about not pulling any punches with traditional, obscure ingredients, and he's not kidding. Not only does he include ingredients that would be hard to find for most westerners (e.g. herbs that have no English names), but he also includes flavorings and techniques that are beyond foreign to western palates (e.g. fermented meat--but don't worry, the beef bile is optional).

That all being said, I still enjoyed reading this book to learn about the diverse cultures and lifestyles in northern Thailand. Bush's writing is friendly and engaging, with tons of anecdotes to bring color to the recipes. In particular he documents many of the cottage-industry food preparations being kept alive in remote, rural villages. Think of this book more as food-focused travel writing than an actual cookbook and you'll have more fun.

Ashani
802 reviews2 followers
July 3, 2020
Heavily relied on culture of Northern Thailand and I appreciate the hardships the author has gone through to deliver the book to readers. And broke the news of ,there's so much more to know about Thailand than "Pad Thai" . However these recipes are hard to pursue to the home cook. I guess that's due to extensive and different ingredients and methods.
Quailynn
10 reviews
October 20, 2020
Helpful to understanding Thai cuisine

I learned about some new ingredients that I’m especially excited to experiment with. Interesting way the book was written. I like the approach very educational and well documented recipes of traditional local dishes and how they are prepared.
Elizabeth
782 reviews18 followers
November 9, 2018
Overall, a decent book. The short sections on types of food, spices, little slices of life were really good. The photos were excellent. Honestly, I don't plan on making any recipes from this book. I'm just not interested and the way the recipes are laid out can be an issue.

Ietrio
6,572 reviews25 followers
February 14, 2020
What looks to be a nice cook book turns out to be quite a joke. Yea, it is full color and probably "traditional", whatever that might mean, but the recipes are not that many as there is a lot of text in between. And, please, the mortar is "traditional Thai"?

Ash
91 reviews
January 17, 2021
Did not like the recipe format.
Laura
2,819 reviews
September 2, 2021
an interesting travel read. loved the history of the regions and types of food. although it did not feel very easy to replicate with techniques and ingredients.