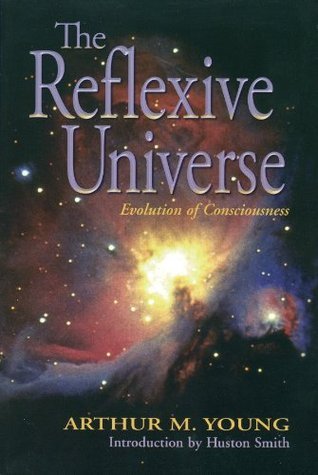 The Reflexive Universe: Evolution of Consciousness

4.35
51 ratings7 reviews
Rate this book
Integrating the findings of modern science with ancient wisdom, this seminal work offers a paradigm for resolving the schism between spirit and matter. Arthur Young's Theory of Process provides a model for the evolution of consciousness out of light (the quantum of action), offering hope for an age in search of value and meaning. This is a facsimile of the original 1976 Delacorte edition, with typographic corrections in the text and a new introduction by Huston Smith.

4.35
51 ratings7 reviews
5 stars
27 (52%)
4 stars
17 (33%)
3 stars
6 (11%)
2 stars
0 (0%)
1 star
1 (1%)
Displaying 1 - 7 of 7 reviews
A.A. Attanasio
Author 53 books299 followers
April 26, 2012
This book weaves a nubbly tapestry of creation (of the physical and biological kingdoms) that features the freedom of photons, the dynasties of atoms and molecules, the phyla of life and the dynamism of consciousness, purpose and myth. First published in 1976, the ideas are timeless and remain fresh. The Reflexive Universe is my favorite example of a science fantasy, where the author (a mathematician and helicopter designer) employs scientific concepts to explore his intuitions, in this case light’s descent into matter and subsequent ascent into consciousness. Though science informs Young’s thesis, this is not really a scientific proof but, rather, an empirically informed speculation about the process of consciousness in nature. It’s a fascinating reading experience even for those without scientific backgrounds: Young meticulously describes fundamental concepts (such as Heisenberg’s uncertainty principle and the Planck constant) in an accessible manner. Some of the spiritual topics that this work approaches through science include the nature of a group soul, the uniqueness of homo sapiens, and the deep significance of myth. His thoughtfully developed argument reaches the conclusion that “the creative aspect of the universe revealed by quantum physics confirms the teachings of myth and revealed religion, and hence fulfills our quest for an integration of science and those nonphysical realities thought to be unverified by science.” It’s a monumental work that conflates scientific and mythopoeic thinking. And it's fun to read!
Doug Webber
Author 1 book
August 22, 2017
This is a very unique work that recognizes that all things in the universe can be divided into different levels or degrees of order. The general public recognizes that all things in the universe can be divided between animal, vegetable or mineral, but this book goes a step further in recognizing a pattern where there are seven degrees of order. This closely corresponds to the seven days of creation in Genesis but the author does not dwell on that subject, which is unfortunate, as this book had the potential to combine science with religion. I give it four stars, because the science is out of date as it was written in the 1970s, and does not incorporate the modern findings of molecular phylogenetics. Moreover by the seventh stage of order we come to the spiritual realm, and here the author reaches the limit of his knowledge and merely describes it as "ineffable" as he has reached the limit of his knowledge. Despite the shortcomings, the author is on to something, by recognizing that there are increasing degrees of order in the universe. The idea of degrees of order is applicable throughout many different areas of science, and because of that this book could easily become a book about everything. Thus the book bites off more than it can chew. There is even a section of describing the human process as myth and this part is rather weak.

The other book that I have read that recognizes different degrees of order in the universe is the work "Divine Love and Wisdom" by Emanuel Swedenborg, but as this was written in the 18th century it is even more limited in terms of proof from scientific knowledge. However that work provides an overarching basic philosophy that explains the "why" of what Young observes in "The Reflexive Universe."

Overall this is a work that I would like to see updated with a modern sequel, but with the corrections of the findings of science over the past 40 years. It is one of my favorite books, I have blogged about it on my web site http://dream-prophecy.blogspot.com/ with several blogs given the label "Universal Order." Readers can find there some corrections I have applied to the findings presented in this book. In addition to combining this with updated science, I have slightly modified some of the degrees of order. But the author's finding that there is indeed a seven-fold nature to the universe still stands.
Scott Beddingfield
133 reviews1 follower
January 21, 2017
Crazy dense but for me did a nice job of rigorously (lots of advanced math!) describing a theory of process describing the interaction of the creative with the laws of matter and science. Why does this matter? For me as a person of faith, specifically a Christian, a scientific framework of evolution and cosmology is provided through which the unmistakable presence of the Holy Spirit can be seen in and driving each stage of descent, ascent and finally permanence. For me this married nicely with Cynthia Bourgeault's 'Holy Trinity and the Law of Three'.
David Kay
2 reviews
August 9, 2018
Thought-provoking. I'm still digesting to what degree I buy all of the theory, but it has certainly given me a new lens and I laud Arthur's original thinking. A very enjoyable, interdisciplinary, and insightful read.

Nachtkind
63 reviews
June 11, 2008
I was quite excited to read this book, but the further I got into it, the harder it became for me to follow. There are just too many errors in the science. The book was written in the late 70's so, at first, I excused the inaccuracies as outdated science. However, when he made the claim that DNA likely emits radio waves, I gave up (Close to that was the claim that he could reconcile quantum theory and relativity quite easily). There is a certain core belief I share with this author - that consciousness is a natural function of the universe and is not at odds to scientific thought. However, the framework built by Mr. Young seems too me too forced. (Everything can be made to fit in groups of seven if you try hard enough.) There could be a few interesting things to take from this book but if you do not have a scientific background do not read this book. Otherwise - you will not be able to distinguish scientific theory from inaccuracies.

RONALD PEYTON
88 reviews
June 28, 2021
Got a copy of this book on 7 May 2021, added it to my stack of books to read.
This was a difficult book for me to read. It taxed by memory of chemistry, physics, religion, and philosphy. I gradually understood, sort of, what he was doing and where he was going. The charts and diagrams really helped a lot to clarify explanations. This is an interesting theory and the way he develops the concept and lays it out, is quite convincing. Will provide food for thought for a long time. Very interesting where he places man now and provides some possible insight as to where man could be headed and what that existence could be like.
Whoisabishag
37 reviews8 followers
February 1, 2018
"Have You Become Self Aware AND Knowledgeable Of Your Limits, To Confirm That READ This Book AND It's Companion "The Geometry Of Meaning" : https://www.goodreads.com/review/show... "!"