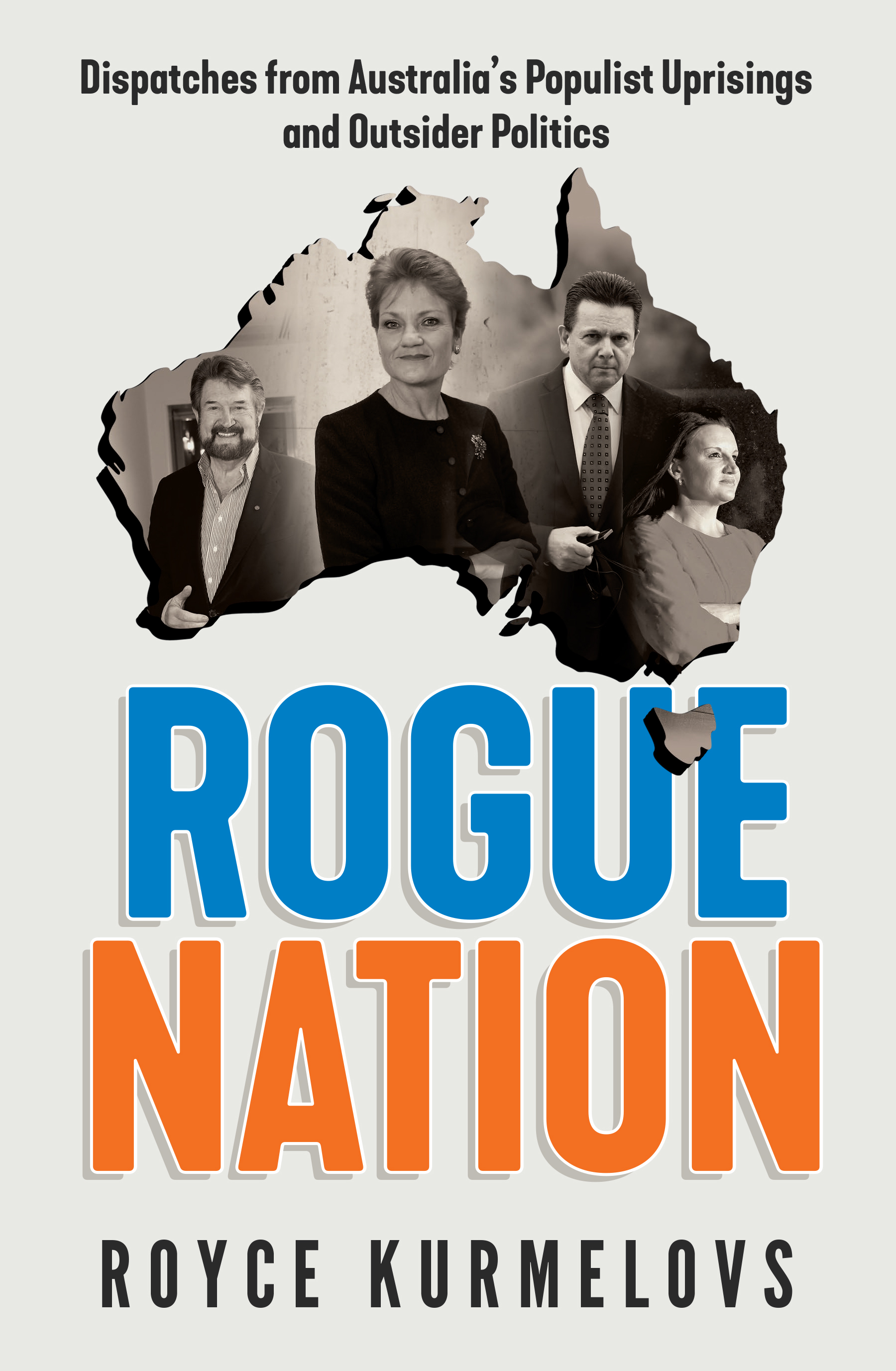 4.14
28 ratings3 reviews
Rate this book
This fascinating first-hand account of the phenomenon of One Nation, from within Canberra and outside it, will be compulsory reading for any Australian who cares about their vote.

Reporting from the backrooms and corridors of Parliament House in Canberra to the streets of post-industrial Burnie in Tasmania, the struggling rural communities of Gippsland and the Queensland heartland, Royce Kurmelovs captures with perceptive, real-time analysis the rise of Australian populism.

The people and places he profiles tell the story of those independent political figures who have tried to take power from the outside and those who feel abandoned by both the left and right of politics. Overshadowing it all is the controversial figure of Pauline Hanson, a woman who came back from oblivion to become a power broker just as the country breathlessly watched the election of Donald Trump and wondered whether the same could happen here.

Rogue Nation is essential reading for anyone who wants to know what is happening to politics in this country, and what the future might hold.

8 books11 followers
Royce Kurmelovs is an Australian freelance journalist and author. His books include The Death of Holden (2016), Rogue Nation (2017), Boom and Bust (2018) and Just Money (2020). He lives in Adelaide, South Australia.

"One of Australia’s most important socio-political voices..." - Kill Your Darlings magazine

"...Prolific. Not to mention cutting." - The Advertiser

"...goes beyond trade-craft and runs to the core of Kurmelovs’s moral code: economic abstraction without considering the human implications is what produces a system that thrives on exploitation and hardship." - Australian Book Review

"Rogue Nation" is a title that can be read in several ways, and all of them might be valid in some way. The people and activities in the book are at the periphery and also the centre of current Australian politics. The author, Royce Kurmelovs, is a working-class boy from north of Adelaide, around where local cars used to be built, and this background informs his journeys and writing. A sometime adviser to one-time Senators Ricky Muir, and then Nick Xenophon, Kurmelovs provides an insiders/outsiders view of Australia's federal parliament and its recent history of minority governments and strange leaders.

A theme of the book is the controversial Pauline Hanson, her party machinery/machinations and those who support her, often for reasons the author points out are not grasped by the major parties and which appear to be largely outside specific policies: not being listened to chief among them, it seems. This feeling spreads further than Hanson and her curiously managed party. Her focus on social media as a means of communication to followers is something I hadn't read about before.

Kurmelovs also paints an interesting picture of his erstwhile employees Muir and Xenophon and in some ways these insights are a typical product of his thinking and writing. The fringe groups Reclaim Australia and the United Patriots Front are also encountered, and the observations tally with John Safron's energetic book on extremists, where it seems you don't have to go far to encounter anti-semitism as well as anti-Islamic feeling. Like Safran, the author points out the similarities between the far right and the far left as far as prejudice and bullying go. Idologists of any kind seem to end up in similar places. Perhaps that's one reason why they clask with each other

Comparisons and allusions are drawn with overseas events, notably Donald Trump as you would expect, in the context of the challenge to democracy. The distance between the main parties and the public at large is also canvassed: the desire of some to shake things up by voting in these outsiders. Other figures such as Clive Palmer, Jacqui Lambie, Tony Windsor and Bob Katter get a run.

If you don't know who any of these people are but are curious to know about the way Australians do politics these days then track down this book. It's very well written and an easy read. Some elements of the Australian psyche will be on display, for good or ill, noting that there are many ways to be an Australian, or an American or anyone else for that matter.

Louisa Reid
12 reviews
August 20, 2019
Kurmelovs provided a book that I even enjoyed to read - it was predominantly anti-Pauline Hanson, a politician I really don't like. Kurmelovs started with other country politics as he watched the news that Trump had won in USA, something which many Australians shivered about. He ended the first chapter with "If Canberra's religion was politics, we were sinners in the hands of angry gods." That comment also gave me shivers.

Hanson took most chapters, and I like how Kurmelovs had written - I don't think he ever liked her any more than I did, which was non-existent. Rogue Nation's cover has pics of Hanson, Xenophon, Lambie and Hinch: all except Hanson are independents. Kurmelovs covered a little about each of them and returned to Hanson: her history, her entry into politics, her loss in politics, and recently her re-entry into politics, all with her own One Nation party - which is known as Pauline Hanson's One Nation. Australia is not "Pauline Hanson's" country, and calling a political party after the person who introduced it is a selfish move, full just of their own pride. See also the Palmer United Party; Katter's Australian Party; Jacqui Lambie Network; Nick Xenophon Team. Some of those have vanished since the 2016 and 2019 elections. I wish Hanson's party would vanish!

Ashby helps Hanson within her party, and he is just as bad as she is. According to Kurmelovs, "if you wanted to deal with Hanson, you had to deal with Ashby." Before he'd started with Hanson he had almost vanished from politics - she contacted him and employed him. Kurmelovs said that she "had always been a Che Guevara in want of a Fidel", and she saw Ashby as support for her. She "trusted him unconditionally". Many One Nation workers left because of him, and his running of the party for Hanson and himself, rather than those members.

Kurmelovs included chapters about those in the cover photo - he wrote about Nick Xenophon, Derryn Hinch and Jacqui Lambie, and he also included Tony Windsor (Nationals); Malcolm Roberts (One Nation); Indie Rose Norris (who had worked for United Patriots Front under Shermon Burgess and Brian Cottrell); Cory Bernardi (Independent after he left LNP); and others who had contact with Hanson. He wrote that Hanson's tale "is the story of the breakdown of political parties" and includes "class, wealth inequality and a growing underclass". That is how so many of the population in Australia feel, and those who voted for Hanson think nothing about what she is saying: they just want to get rid of the two top parties, LNP and ALP. I sure hope that she will not get control of the parliament, because this country will end up on the top of the pile she has made.

And we don't need this.

Greg
243 reviews
November 24, 2017
Had not previously read anything by this author, but after reading Rogue Nation - which surpassed all expectations - I reckon Royce Kurmelovs is one of the most important political/social 'voices' in Australia today. Completed the book on the eve of the Queensland state election and regardless of that outcome, the book speaks to everyone. Purchased the book purely because I thought it would cover the 'rogue' element of Australia's parliament, but it's so much more. Australia's Hillbilly Elegy!
Displaying 1 - 3 of 3 reviews