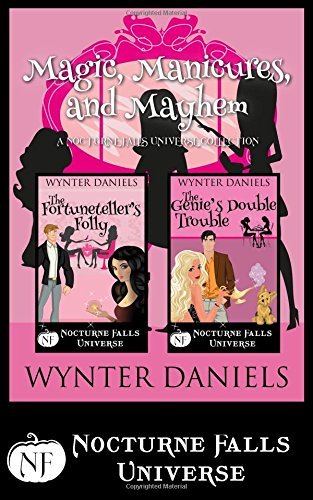 Palm reader Darcy Kumar is cursed. She’ll be dead within a year, so why bother with love? After a brush with death she resolves not to squander what little time she has left. So when sexy firefighter Aiden Becker asks her out, she accepts. As long as she doesn’t have a child, the curse will end with her demise.

A Kachina healer and the last of his line, Aiden is compelled to pass along his gift to future generations. He doesn’t believe in the curse that Darcy thinks will finish her, but he has second thoughts after she has several close calls. He starts suspecting that her near misses aren’t accidents at all.

When they enlist the help of a powerful local witch, they learn there are even more sinister forces at work than just a curse. Someone’s gunning for Darcy. Will they find out who before it’s too late?

Psychic Mallory Vaughn loves her neat, organized life as a manicurist at Nocturne Falls’ busiest salon. Things are going great until Jordan—her train wreck of a twin—lands on Mallory’s doorstep with a suitcase full of trouble.

Cyrus Barker is a genie who belongs to a small-town sheriff and the man’s entrepreneur wife. When Jordan wins an unwinnable jackpot from the wife, the couple dispatches Cyrus to get the money and bring Jordan back. He follows her to the strangest town he’s ever seen. To make matters worse, he loses Jordan, but finds her twin, Mallory—and is immediately entranced by her.

The last thing Mallory wants is to be part of her sister’s chaos, but if she doesn’t divert the sexy genie’s attention, Jordan will stay long enough to unravel Mallory’s entire world. When Jordan disappears, Mallory’s compelled to join forces with her sister’s arch enemy in order to save her. As long as she can avoid falling for Cyrus, it’ll all work out.

But love has other plans…

81 books158 followers
Wynter Daniels has penned more than two dozen books in various romance genres including paranormal, romantic suspense and contemporary for several publishers including Entangled Publishing and Kristen Painter's Nocturne Falls Universe. In 2019, she launched a brand new world with author Catherine Kean. Wynter lives in sunny Florida with her family and a spoiled cat. Find her at www.WynterDaniels.com, wwwCatsPawCoveRomance.com, on Facebook at https://www.facebook.com/pages/Wynter...
or on Twitter at https://twitter.com/WynterDaniels

4.48
23 ratings6 reviews
5 stars
12 (52%)
4 stars
10 (43%)
3 stars
1 (4%)
2 stars
0 (0%)
1 star
0 (0%)
Displaying 1 - 6 of 6 reviews
Lisa
764 reviews11 followers
September 27, 2017
What a nice surprise to find both books together! I love this author and these are two books that are my favorites. If you like Kristen Painter's Nocturne Falls series, you will also love these. They are full of fun quirky characters.
Anna Salamatin
511 reviews3 followers
October 2, 2017
Fortune Tellers Folly ...
In Nocturne Falls it's always Halloween. At least that's what the tourists believe. They don't know this universe of Supernatural characters are quite real... for instance, at the Hair Scar Salon you can have your fortune told while getting your nails done by Darcy Kumar. It's here that she first meets the very sexy fireman Aiden Becker who brings his Grandmother in to get her hair done. He's also a Kachina healer. Darcy and Aiden each have their own pressures to deal with. Aiden's has to do with the future while Darcy's is about not having one..... this is their story.

The Genie's Double Trouble ...
First of all.... Yay! ... I'm just thrilled to be back in Nocturnal Falls with yet another delightfully different story line... this one is about Cyrus whose a genie, Sheriff Winston Pfeifer who now has the genies lamp and Ivy, his greedy wife of only three years who has influenced two of the three wishes.... this puts us in Nocturnal Falls with Cyrus tasked with bringing back Jordon, (Mallory's psychic twin)
along with a dog named Truffles and some money she's accused of stealing..... I was thrilled to be with old friends in NF, but what happens when Cyrus and Mallory meet ? (a genie and a psychic!) It's when they put their heads together to help Jordan that their hearts become involved.....It's just impossible. Or is it?
T.M. Payne
Author 30 books87 followers
September 27, 2017
Book Reviewed: Magic, Manicures, and Mayhem: A Nocturne Falls Universe
Author: Wynter Daniels
Publication Date: 9/26/2017
Reviewed by: Tammy Payne- Book Nook Nuts
My Rating: 5 Stars


REVIEW
I have read both of these romcom stories in the Nocturnal Falls Universe and I am sharing my reviews.

The Fortuneteller's Folly:
This is a short story full of suspense and romance.
We have a town that is full of paranormal beings and that is why Darcy chose to move there. She has one issue however someone is trying to kill her.

Enter one very determined EMT who is also a healer one of the last of his kind. Darcy tries to keep herself at a distance from him and he makes that pretty hard.

Read the story and find out who was the problem child in this really fun to read short story.

The Genie's Double Trouble:
We are heading back to Halloween Town with non other than a Genie. Cyrus must find the person who stole cash and a dog from his master. Although he dreads any of it.

Mallory has had a horrible time of things when it comes to her twin even worse. But what is she going to do when that twin shows up and is in trouble?

This is a cute short read. We get a bit of a mystery to solve.
I enjoyed it. 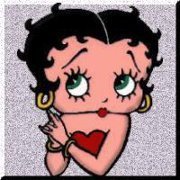 Darcy Kumar is a cursed Palm Reader and has moved to Nocturne Falls (a town of humans & supernaturals). She's attracted to Aiden Reed, who is an EMT and the last of the Kachina Healers. Because of the curse she doesn't want to get involved with him and have him hurt. However, Aiden isn't giving up so easily!

Loved this story which has mystery, suspense, romance and a twist I wasn't expecting!! I'm a fan of this author and I love all of her books!

What happens when a Genie, Cyrus Barkes, is sent on a mission to find someone and bring that person back to his master. A lot of complications for everyone especially since there are twins involved!! I loved this book from start to finish-couldn't put it down until I finished it. Has a unique storyline, a quick read, sexy & funny characters, intrigue and an unexpected twist. Also has an HEA!
I highly recommend this book
Jennifer
718 reviews12 followers
September 30, 2017
Another really good Nocturne Falls Universe addition. Genies Double Trouble is the second book in this series from this Arthur and it follows the same main character in this one. You can read them both or just this one and still know what is what. Loved the Genie angle in this one always a fun read. Nice and fast to read with plenty of action and romance. Loved it!!
Myriam
647 reviews20 followers
October 5, 2017
That is three starts for Fortuneteller's Folly and four and a half stars for Genie's Double Trouble.
*Fortuneteller's Folly is about Darcy Kumar, a fortuneteller who is cursed to die young, and Aiden Becker, a Kachina healer. The whole idea and the story are pretty good and interesting. Due to the nature of the curse and some added problems, this story contains more suspense than the other stories, which was quite nice.
However, there are some fundamental problems in this story. First of all, the writing is not as smooth and fabulous as I expected and the characters are not as strong, independent and lovable as I would like. Additionally, there is this unrealistic insta-love, where a nice buildup would read much better. It improves as the story progresses but I have to admit that it was hard to read because of it. There is also too much explicit content which does not suit original Nocturne Falls idea. And this bothered me a lot as I happily and without reservations recommended Nocturne Falls series to my friends with young teenage kids, due to its clean non-explicit content.
For example, *SPOILERS* the same day they met, Darcy and Aiden are talking about caring about each other a lot and end up in bed together. The next day they are already falling for each other and planning a future, and the third day she already meets his mother!
There are some additional points of irritation, for example Darcy is so impresses with Aiden’s cooking skills after eating eggs he made for breakfast!? In general, the writing is forced and rushed, and although it gets better, I still could not get over the initial disappointment. Characters are weak, Aiden is like a love-struck puppy and Darcy is just plain irritating with her need to protect him from being hurt by leaving, while she should definitely not be alone while in danger, and while her time would be better used trying to fix her issues instead of just giving up. My first impression was that they had this on and off relationship in the first three days, with the number of times she broke up with him. Fortunately, it does get better as the story progresses, and the good idea, paired with new kind of supernaturals, saved this novel.
Overall, it was okay story, but it would read better outside of the Nocturne Falls Universe.
*Genie's Double Trouble is the second book by this author in Nocturne Falls. It follows The Fortuneteller's Folly, and this book was quite the opposite, it was really nice. The main characters from the previous book do not appear in this one, and that was nice as well.
The story revolves around Mallory, the Tarot card reader, her sister Jordan, who understands animals and Cyrus, a genie from a magic lamp. That said, there is no love triangle or anything like that, but Jordan is featured so prominently that she surpassed a label of a side character.
There are several facets to the story. The main story is between Mallory and Cyrus, and it is a nice story, but it would be better if Cyrus managed to tamper down his need to express his desire for Mallory. This is actually the only criticism I have of this novel. There is a story following Mallory and Jordan's relationship, which has been quite rocky and the author managed to portray a complex relationship between siblings in a very realistic and human way. Then there is life Jordan left behind, a life consisting of her compassionate relationship with animals, one in particular, and a life that also contained a villain. I have to say, the villain in this story is so evil, probably one of the most evil villain in all Nocturne Falls.
Overall, the author did a great job telling this story, events flow seamlessly, the story is nicely set in Nocturne Falls (even though some other locations have been used), the characters are likable, and the villain you just have to hate. I enjoyed it very much.
*Nocturne Falls universe contains 25 books at the moment. Original Nocturne Falls series contains eight books and four short stories, as well as four books of the Jayne Frost spin off series. All of the series are great entertaining light read and I highly recommend them.