Goodreads helps you keep track of books you want to read.
Start by marking “Family and Other Accidents” as Want to Read: 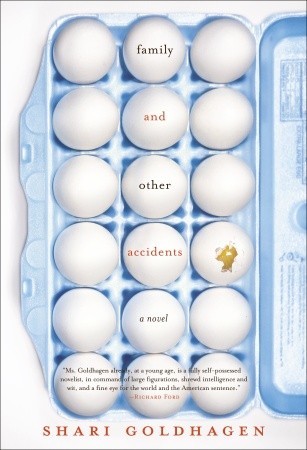 We’d love your help. Let us know what’s wrong with this preview of Family and Other Accidents by Shari Goldhagen.

Preview — Family and Other Accidents by Shari Goldhagen

Family and Other Accidents

Family and Other Accidents tells the story of these brothers from their viewpoints as well as from those of their girlfriends, wives, and children. It is a story of what it means to be a family, to love unconditionally in the face of confusion, anger, and regret. Shari Goldhagen’s debut is a finely nuanced, universally resonant portrait of the ties, however strange or awkward, that bind families together through the decades. ...more

To ask other readers questions about Family and Other Accidents, please sign up.

Eggs on the Cover

Titles: Noun, Noun, and Other Nouns

Start your review of Family and Other Accidents

Aug 24, 2007 Darrin rated it really liked it
Shelves: must-read, literary-fiction
This is a great character driven novel about 2 brothers, Jack and Connor Reed whose parents die within a few years of one another leaving 25 year old Jack as 15 year old Connor's legal guardian.

The book starts with Connor at 17 and Jack at 27 and tells the story of their lives right up until Connor's 40th birthday party.

The characters are flawed, making them that much more human and that much more likable. It's an excellent look into the ties of family that bind us and how those binds sometimes
This is a great character driven novel about 2 brothers, Jack and Connor Reed whose parents die within a few years of one another leaving 25 year old Jack as 15 year old Connor's legal guardian.

The book starts with Connor at 17 and Jack at 27 and tells the story of their lives right up until Connor's 40th birthday party.

The characters are flawed, making them that much more human and that much more likable. It's an excellent look into the ties of family that bind us and how those binds sometimes drive us a bit crazy. ...more

Mar 01, 2016 Robert Ferguson rated it really liked it
The characters are morally reprehensible, but I found myself rooting for them regardless. The book is very well written and paced. The only thing I didn't like is the transitions between chapters, they seemed more like short stories than a cohesive book, which is because that's how some of them started. But I would definitely recommend this one.

Oct 17, 2016 Juanita rated it really liked it
A new way of naming the circumstances of life is accidents...can be fatal or not. This was an exceptional novel, short and precise in making us see the lives of two brothers and their extended families live and unlive different aspects of their unions.

Jul 27, 2010 Rachel rated it really liked it
I've recommended this one to others and they've found it weird...it probably is, but a classic coming-of-age story that I realize the older I get becomes more and more realistic. Plus told from many characters' perspectives, which I enjoy.

Sep 11, 2007 Kristina rated it really liked it
A unique style of writing--some places where the author slows down and spends quality time with her characters (real people you will enjoy spending time with) and other places where she speeds through and skips entire years of their lives. I was intrigued by this in terms of craft.
View 1 comment

Mar 03, 2017 N. rated it really liked it
Recommended to N. by: School Library
This book made me so emotional! I did not think it was going to be so mature and expand on the characters as much as it did. Like it said it's goal was in the beginning, it for sure highlighted the struggles a family can have, whether that be with love and relationships, illness, or growing up and finding yourself. Love love love it.

Another great read that I will be thinking about for a long time to come. ...more

Jan 07, 2008 Susan rated it it was amazing
This is not my usual fare and I can't remember how I heard about it but I'm delighted I did. Connor is a pre-teen when his mother dies and a teenager when his father dies. It's left to his brother, Jack, 10 years his senior to stand in as his family. Goldhagen chronicles the ups and downs of this relationship over several decades in fascinating chapters that nearly stand on their own as short stories. It's really kind of fascinating to read.

May 27, 2007 Mai Ling rated it really liked it
I was tempted to give this book five stars because I liked it that much, but I feel like I should save that high mark for literary masterpieces. This isn't a masterpiece, but it's such an interesting portrait of two brothers, with each chapter a snapshot of their lives from adolescence into adulthood. Maybe it's because they seem so real and so flawed. Apparently this book isn't very widely liked, so I don't know if I would recommend it to anybody, but I LOVED it!

Oct 03, 2010 Daphne Atkeson rated it really liked it
A story of two brothers orphaned when one was 15, the other 25 or so, through 2 decades. Not quite the power of other family dramas I've praised, since one is emotionally stunted, unable to share love, but tender and powerful to the end. Brilliant writing, but almost so understated as to feel flat.

Oct 19, 2013 Mary Anderson rated it really liked it
I immediately liked this book because of all the Cleveland references. I also liked and cared about the characters. However, what I didn't like what how years of time were skipped over with only a mere sentence to explain the passage of time. I really wanted to know what happened to the characters when I finished the book.

Mar 21, 2016 Jennifer rated it really liked it
Didn't know what to expect from the book and the first 2 chapters reminded me of Catcher in the Rye. The book picked up pacing through the middle and finished ok. Made me think hard about dysfunctional families and why people cheat or have affairs. Interesting use of point of view from the different characters.

Jul 26, 2007 Lucy rated it it was amazing
Shelves: 2007
i picked this book off the shelf without a recommendation and it was actually good! that hasn't happened in a while. it's about two brothers and told alternately from each of their perspectives as they grow up (or not), starting from when their mother dies and the elder brother moves home to take care of the younger.

Aug 19, 2009 Kathryn rated it really liked it
excellent...read it in about 2 days. i was surprised this was written by a female author as it told the story of 2 brothers. i liked that it was a story of 25 years of their lives and not just a little snippet...made the read quicker and more interesting

Jul 29, 2008 Andrea rated it it was amazing
This book was very well written and I enjoyed getting to know the characters from through the chapters that they each narrated. I also liked that the author covered a long timeline - we could see the characters mature and develop.

Mar 20, 2012 Jen Courtright rated it really liked it
Shelves: 2012
I loved this book. I found it easy to relate to even when the story was from the male perspective. Made me reflect on my own relationships with the people in my family and how they change over time. Poetic and real, worth reading.

Nov 26, 2009 Cjqviola rated it really liked it
A surprising little book! I could have done without some of the sexual references but I was very intrigued by the relationship of the brothers. That is a subject so seldom dealt with in shorter novels.
Good Read!

Apr 22, 2015 Lauren rated it really liked it  ·  review of another edition
Shelves: fiction, female-authors
There's something about the way Shari Goldhagen writes and the characters she creates and the random jumps in time she navigates that I just love. This didn't seem as polished as "In Some Other World, Maybe" but it was still enjoyable and page-turning and emotionally raw.

Aug 12, 2007 Molly rated it really liked it
I really enjoyed this book--it was well written without being overwritten, and the characters were as flawed as they come but still likeable and empathetic. A very good read.

Oct 14, 2011 Cindy rated it really liked it
I loved the writing style in this book. In the words of Ann, it "engaged me" throughout. Will be looking for other books by Goldhagen.

Apr 11, 2011 Lauren Hanrahan rated it liked it
I liked this story of two brothers. My only gripe was that the pop culture references didn't make sense with the timeline. It was distracting.

May 06, 2007 Lorie Kleiner Eckert rated it it was amazing
Scotty Eck went to Sunday School with the author!!

Feb 24, 2012 Dave 25 rated it it was amazing
I really loved this book. It follows a couple of brothers who lose their parents. It's a quick read, and a great story.

Dec 13, 2017 Samantha rated it really liked it
A lovely portrait of what family really means. Bumping it down one star because I could never decide whether I loved or hated the constantly shifting perspectives of narration. 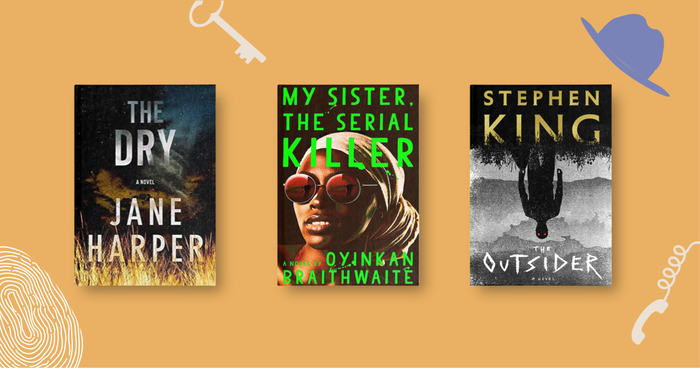 The 40 Most Popular Mysteries of the Past Five Years
Has it been a while since you've explored the mystery and thriller genre? Well, you're in luck because you are about to discover a lot of great...
Read more...
37 likes · 13 comments

Trivia About Family and Other ...

Quotes from Family and Other ...

“That part won't be hard at all; It's easy to love something when you know it's only for a finite amount of time.”
More quotes…