Goodreads helps you keep track of books you want to read.
Start by marking “The List” as Want to Read: 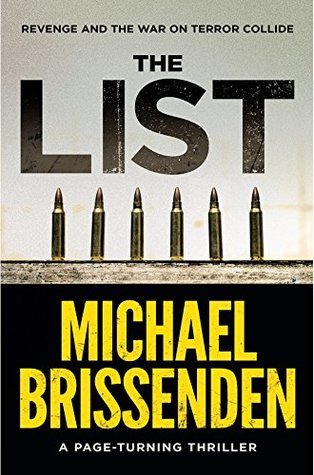 We’d love your help. Let us know what’s wrong with this preview of The List by Michael Brissenden.

Deciphering that message reveals a much wider threat and Sid and the agency have to decide just how far they'll go to prevent a deadly attack.
Time is running out ... for them and Australia.

From the brutal battlegrounds of Afghanistan, to the western Sydney suburbs and the halls of power in Canberra, THE LIST is a page-turning thriller where justice, revenge and the war on terror collide. ...more

Be the first to ask a question about The List

Apr 30, 2019 MaryG2E rated it really liked it
Shelves: z-2019-alphabetical, z-2019-aust-authors, z-2019-ar-genre-chlg
Michael Brissenden is a distinguished and highly respected Australian television reporter and foreign correspondent. His long career has taken him all over the world, reporting in many trouble spots and theatres of war. He has seen first hand and through the eyes of his colleagues and contacts the impact of conflict on individuals and communities. While The List is a novel, I have no doubt that many elements have been drawn from real life.

The story has a fairly simple premise. An Australian Michael Brissenden is a distinguished and highly respected Australian television reporter and foreign correspondent. His long career has taken him all over the world, reporting in many trouble spots and theatres of war. He has seen first hand and through the eyes of his colleagues and contacts the impact of conflict on individuals and communities. While The List is a novel, I have no doubt that many elements have been drawn from real life.

The story has a fairly simple premise. An Australian veteran of the Afghanistan campaign is physically wounded and psychologically damaged while on a tour of duty. Some years later he embarks on the systematic killing of young Muslim men in western Sydney. What all the victims share in common is that they are on an ASIO list of potential terrorists.

Two Sydney detectives, Sid Allen and Haifa Hourani, investigate, with the benefit of Haifa's connections to the Muslim community. As the public face of moderate Islam, her brother is a prominent civil spokesperson for the community, and a potential candidate for a parliamentary seat. But is Hakim Hourani hiding secrets? Is he connected to the mysterious jihadist known as The Scorpion?

The Scorpion has a list of his own - a large number of public sites that are to be hit with bombings at the same time on a particular day in March.

The detectives and their colleagues in the police force and security services are ill-equipped to face the challenges of catching the avenging veteran with PTSD and a murderous intent, and trying to stop the mass killing of citizens at locations targeted by The Scorpion. Will events overtake them?

The prose style of this well-constructed novel is simple and unadorned, which makes it accessible to a very wide audience. It is anything but high-brow. I think this is an important feature, and I applaud Brissenden for keeping things simple and the story lines comprehensible to a broad section of the community.

Because this is a book well worth reading...

Brissenden has assembled a range of characters who represent various viewpoints on issues that are highly relevant to contemporary Australian society. The detective Haifa is conflicted, as she attempts to juggle her position in two widely divergent communities. The Muslim preacher is an expert at manipulating the media and pressing home his agenda. The Prime Minister is a cynical prick, who is an expert media performer, but whose sole underlying motivation is to win the upcoming election. The traumatised vet is a tragic case, whose story reflects the experience of many service personnel whom Brissenden witnessed in action in conflict zones.

While I was reading this novel, in Sri Lanka the mass murder of Christian church-goers occurred during Easter celebrations, a brutal crime for which Islamic State claimed responsibility. It was a timely reminder of the evil of international terrorism, and The List is a clever way for readers to get a handle on some of the issues. ...more
View 2 comments

Aug 24, 2017 Roy rated it did not like it
Very easy read. If I'm brutally honest, it was very predictable and formulaic. If you arent a big reader of crime/thrillers, this maybe a very good read. However there are plenty of novels in this mould that just do the genre better.

Well-plotted, the story revolves around a potential terrorist plot with Sydney as the target, and the politics surrounding the matter. The main characters are part the Australian Federal Police's K block, a unit focused on stopping terrorism.

This one had me totally gripped, and left me hoping the story is far more fiction than fact. The ending leaves potential for a sequel, and if that eventuates, I will certainly be keen to Really enjoyed this explosive thriller by journalist Michael Brissenden.

Well-plotted, the story revolves around a potential terrorist plot with Sydney as the target, and the politics surrounding the matter. The main characters are part the Australian Federal Police's K block, a unit focused on stopping terrorism.

This one had me totally gripped, and left me hoping the story is far more fiction than fact. The ending leaves potential for a sequel, and if that eventuates, I will certainly be keen to read it. ...more

Aug 21, 2017 Mark Silva rated it it was amazing
Enjoyed it immensely, a ripping yarn.

My thoughts…
This plot is quite confronting with regard to the possible future of terrorism in this country. Whilst I know it is fiction and these subjects should be discussed, I wonder if by putting these atrocities out there we might be inviting people to see these terror plots as real possibilities. It happens in both book and crime shows on TV, I know, but this was a little too real for me. The author has kind of done the job of planning an attack for them!
Both Sid and Haifa seem to carry their own share of baggage with them whilst they are investigating the killings. So much so, I found myself wondering why they were working for the AFP’s K block, as neither seem to be happy in their work!
I did get a little lost at stages in the story when I felt like the narrator was ‘teaching' me about terrorism and the Muslim cultural connections in Sydney. I did not like the way the Prime Minister is portrayed in such a negative light.
Overall, a lot of conflict that ultimately comes to a head and I guess the bad guys get everything they deserve, or do they? The author leaves this open.

Apr 11, 2018 Cyndi rated it liked it
While not as poorly written as some politicians' efforts at fiction I've seen (they really need to think that through more eh), Brissenden does seem to attempt a large scale story on his usual reporter's word budget. While amusing and occasionally eloquent turns of phrase do appear, they're sadly too often undermined by cliché and sub-par character development. It gets an extra star for at least attempting a multi-faceted context in which to place its terrorism. It's a 'nice try' from me.

Jan 20, 2018 Balthazar Lawson rated it it was ok
Overall this book didn't really grab me. It was lacking a depth that grabs the reader and doesn't let go. There were characters in this that didn't make sense, actions that weren't explained and actions by supposedly professionals that were very unprofessional. Some of it just didn't make sense.

It's a story of a hunt for terrorists in Australia. But a very badly executed hunt.

Sep 16, 2017 Ebonie Macleod rated it it was ok
A fast paced easy read which to be honest only validated a lot of thoughts I have relating to security in this country. They are not ones of confidence or safety. The book builds towards a huge only ending only to be concluded quite quickly which is a common characteristic of first novels. I look forward to the second book which will build on this one.

Feb 04, 2019 Martin rated it liked it
add the 1/2...set in my hometown gives the book a sense of familiarisation as many of the locations I know very well so I can easily visualise the book. The story is plausible and as a journalist MB writes well enough to allow the reader to 'run' with the story.

Sep 20, 2019 Sue rated it really liked it
Highly compelling and scary to think this might be happening now. Great pace and right to the last more secrets are uncovered.

Feb 16, 2019 Ian Murray rated it really liked it  ·  review of another edition
A page-turner of a political thriller, set in Australia, even if somewhat predictable

Apr 28, 2018 Mark Rugless rated it liked it
Entertaining read. Lots of relevance to the issues of the day and the ethnic relationships across Sydeny.

Aug 19, 2017 Mike Taverner rated it liked it
Rather formulaic plot, but I always enjoy a local thriller

For some years Michael was a regular contributor to Matilda.com. He has written for The Bulletin and has been a food and wine critic for the Canberra Times. He has also contributed to two published collections of essays: Travellers Tales 1 and The Science Minister and the Sea Cow – Thirteen essays on the nature of choice. His political analysis features regularly on ABC Online.