Goodreads helps you keep track of books you want to read.
Start by marking “Shadow Play: The Unsolved Murder of Robert F. Kennedy” as Want to Read: 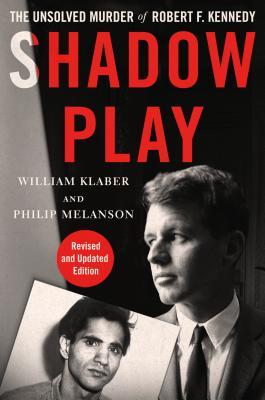 We’d love your help. Let us know what’s wrong with this preview of Shadow Play by William Klaber.

by
William Klaber (Goodreads Author),
Philip Melanson
4.13  ·  Rating details ·  40 ratings  ·  9 reviews
This updated edition for the 50th anniversary of Robert F. Kennedy’s murder explores ignored witness accounts, coerced testimony, bullet-hole evidence, and other issues surrounding the political homicide, and is the basis for the new podcast, The RFK Tapes, which debuted at #1 on the iTunes chart, available now.

On June 4, 1968, just after he had declared victory in the This updated edition for the 50th anniversary of Robert F. Kennedy’s murder explores ignored witness accounts, coerced testimony, bullet-hole evidence, and other issues surrounding the political homicide, and is the basis for the new podcast, The RFK Tapes, which debuted at #1 on the iTunes chart, available now.

On June 4, 1968, just after he had declared victory in the California presidential primary, Robert F. Kennedy was gunned down in the kitchen of the Ambassador Hotel. Captured a few feet away, gun in hand, was a young Palestinian-American named Sirhan Sirhan. The case against Sirhan was declared “open and shut” and the court proceedings against him were billed as “the trial of the century”; American justice at its fairest and most sure. But was it? By careful examination of the police files, hidden for twenty years, Shadow Play explores the chilling significance of altered evidence, ignored witnesses, and coerced testimony. It challenges the official assumptions and conclusions about this most troubling, and perhaps still unsolved, political murder. ...more

To ask other readers questions about Shadow Play, please sign up.

Be the first to ask a question about Shadow Play

Explore the Shadows (of Human Nature)

Start your review of Shadow Play: The Unsolved Murder of Robert F. Kennedy

Dec 21, 2018 MA rated it did not like it
Shelves: giveaways, 2018
I admit I enjoy a Kennedy conspiracy theory as much as the next person, but this was long, dragged out and boring

May 30, 2018 Kathy Heare Watts rated it it was amazing
Shelves: book-i-won, first-read, owned, paperback, political
It is hard to believe it has been fifty years, and yet, as a 9-year-old, I remember seeing it as it unfolded on a black and white television.

I won a copy of this book during a Goodreads giveaway. I am under no obligation to leave a review or rating and do so voluntarily. I am paying it forward by passing this book along to a family member who I think will enjoy it too.

Aug 03, 2018 Lawrence rated it really liked it
A tremendous book, less an examination of the evidence than about the history of the prosecution of the accused assassin, Sirhan Sirhan. Although it argues that others were involved in Robert Kennedy's murder, it is neither hagiography nor conspiratorial screed. It professionally argues the evidence that Sirhan may have been a "Manchurian Candidate". Highly recommended.

Jun 20, 2018 Janice rated it it was amazing
I am not a big believer in “conspiracy theories “ but I found this book to be fascinating. It certainly seems well-researched and it is definitely well-written. It gives one food for thought that this case was not as cut-and-dried as is commonly presented. A definite recommend.
My thanks to NetGalley for providing me with an arc in exchange for my honest review.

Aug 13, 2018 Will rated it it was amazing
Well documented information on the existence of others who probably shot Robert F. Kennedy. A coup against the electoral process.

What the researchers found answered that question, and in 1992 the group filed a formal Request to the LA County Grand Jury asking for a special prosecutor to investigate the LAPD for “willful and corrupt misconduct” in its investigation of the Kennedy murder. The Request was accompanied by 800 pages of exhibits drawn from the files which documented the LAPD’s “destruction of evidence, falsification of evidence and coercion of witnesses.”

When the Grand Jury failed to act, Mr. Klaber went back to New York where he produced a public radio documentary that featured startling audio tapes that had been hidden in the police files. The one-hour documentary was titled The RFK Tapes, and it played on 160 public radio stations across the country. So compelling was this new material that Time magazine gave the program a full-page review. A book offer from St. Martin’s Press followed, and Professor Philip Melanson joined Mr. Klaber in this endeavor. Shadow Play came out in 1997 and it explored the many newly opened questions surrounding the Kennedy murder. Since 1997 there have been a handful of significant developments in the case, and these are fully explored in the new edition of Shadow Play: The Unsolved Murder of Robert Kennedy.

Trivia About Shadow Play: The ...