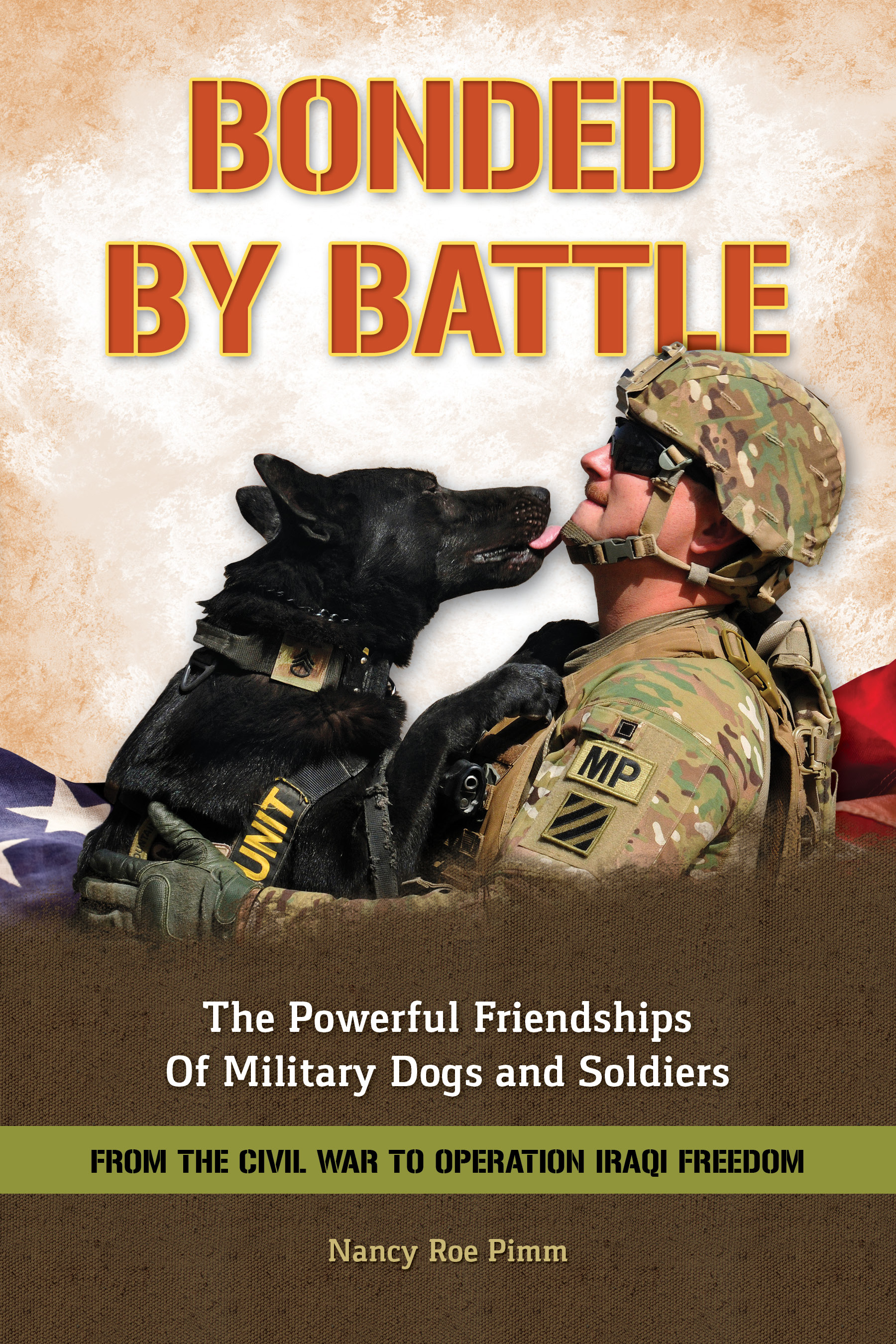 Bonded By Battle: The Powerful Friendships of Military Dogs and Soldiers from the Civil War to Operation Iraqi Freedom


Dogs have faithfully followed humans into combat since the dawn of time. They've stood sentry as soldiers slept, attacked enemies on command, and refused to leave their masters' sides even as they lay dying. In modern times, the bond between individual soldiers and their canine companions has transformed the roles of both.In this powerful historical narrative, Nancy Roe Pimm tells the story of a dozen remarkable friendships, from the Civil War onward, to show how together, dogs and humans changed the way America's military operates today. Early on they were morale-boosting mascots who wandered onto the battlefield, like Jack of the 102nd Pennsylvania Volunteers, whose value to his regiment was so great that he was exchanged for a Confederate biped in a prisoner swap. But when a World War I stowaway named Stubby showed his ability to detect poison mustard gas in time to alert the soldiers around him, the role of canines in combat began to evolve. While the official military continued to frown on fraternization between men and mutts, individual soldiers found new ways to use their loyal companions' innate skills to keep their units safe. The dog's unmatched sense of smell and hearing proved invaluable in the jungle warfare of Vietnam, detecting booby traps and enemy movements and saving an estimated 10,000 American lives. Stories of their epic bravery circulated widely, like that of Nemo, who lay atop his wounded handler during a fierce firefight, never flinching even with one eye shot out. Finally, the top brass began to take notice, establishing a permanent training facility for military working dogs. Yet even as a new generation of highly trained IED-detecting dogs took to the streets of Fallujah, official policy continued to treat them as little more than expendable equipment. Once again, individual soldiers whose hearts have been touched -- and lives have been saved -- stepped up and fought tirelessly for the rights of their canine companions. Pimm, a distinguished author of nonfiction for young readers, relates this evolving relationship between dogs and soldiers up to the present day.

6 books6 followers
Nancy Roe Pimm had volunteered as a docent for the Columbus Zoo and Aquarium in the 1980s. After taking an animal handling class, the zoo entrusted her with a vanful of critters to take to local school assemblies. Her favorite passengers were Minnie and Max, the opossums. Another docent duty was to lead zoo tours. While giving the tours, Nancy discovered her fascination with gorillas, especially Colo and her family. In 2007, Nancys book, The Heart of the BeastEight Great Gorilla Stories was published, and in 2011, Colos StoryThe Life of One Grand Gorilla.
Born and raised in Brooklyn, New York, Nancy now resides in Plain City, Ohio, along with her husband, Ed, who has retired from a career in racecar driving. Nancy has drawn from her experience as a pit crew member for her husbands race team to write her two other non-fiction titles, The Indy 500- The Inside Track and The Daytona 500-The Thrill and Thunder of the Great American Race. All four of Nancys books are Junior Library Guild Selections. She is currently working on her first YA novel.
Nancy and Ed have three wonderful daughters: Allison, Lindsay, and Carli, a son-in-law Rusty and a two very adorable grandsons, Tommy and Sammy. Nancy still loves to visit schools, but instead of sharing zoo animals, she shares her love of reading and writing. Nancy wrote her first book at age ten, and she brings it to the schools to encourage the students to believe in their dreams. You can reach Nancy through her web site at www.nancyroepimm.com

The biggest question is: What was my favorite story? Because, this book was a bunch of short stories about dogs and their handler. All these dogs are amazing. My favorite was definitely Smoky. Smoky is adorable. By the way, Smoky is a yorkie! There is a picture in the book! It is really cute because Smoky is so small that she is able to fit in an army helmet!!! However, even though Smoky is just so cute, the other dogs are Awesome! My sister read this book before me and she liked all the German shepherds!!

This book deserves 5 stars—the cover and the stories! I would definitely recommend this book to everyone—dog lovers or not! Even though this book is written for younger readers, it is worth it for all ages!!!

Title: Bonded by Battle: The Powerful Friendships of Military Dogs and Soldier

This review is written in my own opinions and words.

Christina Getrost
2,131 reviews65 followers
March 8, 2018
A great nonfiction book all about military working dogs. It focuses on ten main dogs in particular and their stories of service, but in so doing gives a chronological history of dogs in United States combat from the Civil War to modern conflicts. I found most interesting the discussion over the controversy "Should a dog get a Silver Star?" After Chips, in World War II, was given the Silver Star and the Purple Heart, complaints led to a law being passed that from then on no medal meant for humans could be given to dogs. The United Kingdom has the Dickin Medal for animals, however, and that has been awarded to a few American dogs. President Obama signed a law changing dogs from being considered "equipment" (they were usually left behind in war zones, tragically) to "service members" so that they can now be sent home after their service ends. (And Robby's Law, passed in 2000, allows dogs to be adopted when out of the services.) Obama also signed a law assigning money to pay for military working dogs' adoption, transportation, and vet care, instead of requiring the adopter to pay all expenses. Is illustrated with black and white photos, has index and sources. Good book to give to dog lovers and military fans.

Claudia Fett
387 reviews
August 23, 2018
"Bonded by Battle" is a captivating book about many faithful dogs and their handlers who worked together to protect soldiers' lives during a variety of wars. Each chapter is a different story about a dog, his handler, and the specific war in which they served. Nancy Roe Pimm also provides information about the history of dog's receiving medals and/or awards and the laws today. Children in grades 4-7 would find this book captivating and helpful in understanding the important of dogs in the military. The Author's Notes, Photo Credits, and Bibliography provide opportunity for further research.

Peter Harrington
135 reviews
November 29, 2018
I gave this book all five stars as it was very well written; detailed, educational, and interesting from page 1 to the very last page. If you love dogs this is a must read, as it shows you just why "Dog" is "Mans" "Best Friend" that no "Human" can ever match.
Displaying 1 - 4 of 4 reviews