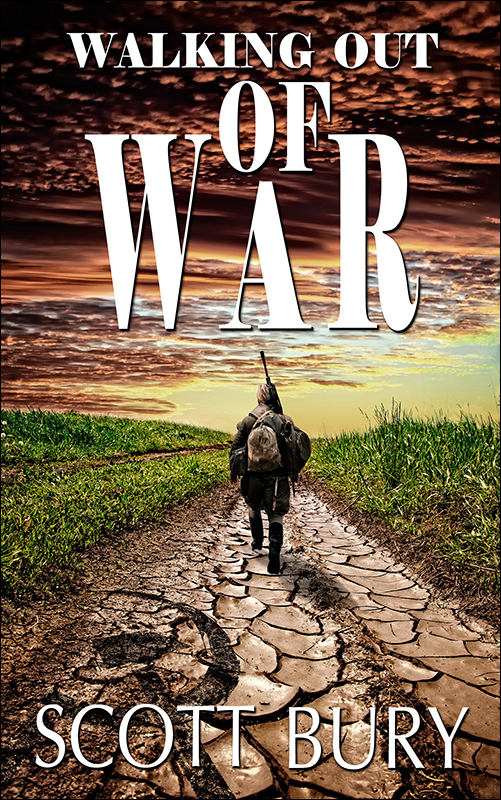 Walking Out of War

4.70
30 ratings7 reviews
Rate this book
Ukraine, 1944: After the Soviets burned the Ukrainian city of Ternopyl to the ground to crush the stubborn Nazi occupiers, they rounded up every remaining Ukrainian man around for the Red Army’s final push on Germany. Maurice Bury, Canadian citizen, Ukrainian resistance fighter and intelligence officer, is thrust once again into the death struggle between Hitler’s Germany and Stalin’s USSR.

Fighting across the Baltics in the autumn of 1944 is tough and bloody. Then the Red Army enters Germany, where they’re no longer liberators—they’re the long-feared Communist horde, bent on destruction, rape and revenge. The Communists are determined to wipe Nazism from the face of the earth. And the soldiers want revenge for Germany's brutal invasion and occupation.

Maurice has determined his only way out of this hell is to survive until Nazi Germany dies, and then move home to Canada. But to do that, he’ll have to not only walk out of war, but elude Stalin’s dreaded secret police.

After a 20-year career in journalism, he turned to writing fiction. "Sam, the Strawb Part," a children's story, came out in 2011, with all the proceeds going to an autism charity. Next was a paranormal short story for grown-ups, "Dark Clouds."

The Eastern Front trilogy tells the true story of Maurice Bury, a Canadian drafted into the USSR’s Red Army to face the German invasion of the Soviet Union. Army of Worn Soles, the first volume, was published in 2014, followed by Under the Nazi Heel in 2016 and Walking Out of War in 2017.

Scott Bury has been invited to contribute to three Kindle Worlds. For the Jet Kindle World, based on a character created by bestseller Russell Blake, he published Jet – Stealth: A Jet Kindle World Novella in July 2015.

Emily Kimelman, author of the Sydney Rye series, invited Scott to contribute to the Sydney Rye Kindle World. His answer was The Wife Line in 2016, and The Three-Way in 2017.

He lives in Ottawa with his two mighty sons, two pesky cats and a very understanding wife.

The final book in Bury’s trilogy opens with Maurice in his mother’s field in western Ukraine, smoking and savoring the sunshine, as he surveys their growing sugar beet crop in a rare peaceful moment. He leans against a fence post, closes his eyes, and meditates on his harrowing escape from a POW camp and his involvement with the secret resistance. As he speculates Ukraine’s chances of gaining independence from the USSR, rough hands seize his arms, and he opens his eyes to members of Stalin’s secret police. He is pulled to a covered truck and forced into the back with other young male captives who’d also been abducted to serve in the Red Army. In the shocking turn of events, Maurice finds himself back in the army that he had deserted, a fact that if discovered would mean his life.

“Walking Out Of War” is a well-written and powerful read, and a difficult one. The violence and war crimes are startling, and Bury, being a master at his craft, effectively paints mental pictures. He doesn’t linger on vile acts, however; he isn’t gratuitous. But he is a vivid writer and skilled at choosing the right verbs and adjectives to bring his prose to life, where the reader can visualize scenes as if watching them on film. The following excerpt was one of the scenes that I could envision and that my mind just sort of got stuck on for awhile:

“The quartermaster’s men were distributing breakfast, tea and bread. Maurice pulled on his coat, watching a teenaged private carrying a big jug across what had been a farmer’s field. He heard the shot a split second after he saw the back of the boy’s head explode. Maurice hit the ground before the poor teenager’s body did.”

The crimes committed by the Red Army soldiers against German civilians after Germany’s surrender are extremely upsetting. I was aware of the assaults, rape, and pillaging. But reading facts in a textbook is much different than having a talented writer reconstruct an eyewitness’s account. Again, Bury doesn’t linger on horrific acts. He paints a memorable glimpse, then hops Maurice’s eyes to another occurrence to take in. Here are a couple glimpses that struck and stuck with me:

“He made his way back to the centre of Berlin, occupied by the Soviet Red Army. The city looked unreal, a living nightmare of blasted buildings, cratered streets and military vehicles. Hundreds of thousands of soldiers from around the world jammed the streets. Maurice dodged as an American jeep roared down the centre of a cleared street, swerving drunkenly from one side to the other, narrowly missing twisted lampposts. He saw grinning GIs and two desperate-looking young women, their blouses blowing open. The men held bottles of wine.”

Though these crimes are disturbing, they also really happened, and for those of us who haven’t experienced the atrocities of war, we need these glimpses and knowledge of our human history— the good, the bad, and the ugly. That said, due to the nature of the content and language, I don’t recommend this trilogy to young readers. Educate them instead with Anne Frank: The Dairy of a Young Girl, Mischling: Second Degree by Ilsa Koehn, and The Hiding Place by Corrie Ten Boom. These three firsthand accounts had a great impact on me as a young teenager.

Scott Bury, thank you for preserving Maurice’s experiences for us all. They will stick with me, just as Anne Frank’s, Corrie Ten Boom’s, and Ilsa Koehn’s have, as well as a quote that I’d first read when I was sixteen: “Those who choose to ignore history are doomed to repeat it.”

This is an incredible true story that explains a portion of the war that gets little attention. The experiences of the Russian soldier and post war Europe. While those in the west were celebrating V-E day, those in the East were cloaked in uncertainty, sometimes with less hope and more fear then when the war was raging. The Iron Curtain slammed down on them hard.
Chaplain Stanley Chapin
1,825 reviews17 followers
November 14, 2018
Very enlightening

I read all three books with great interest. They provided a view of World War Two that is not covered with any discernable amount.
Displaying 1 - 7 of 7 reviews