Goodreads helps you keep track of books you want to read.
Start by marking “Einstein's Mistakes: The Human Failings of Genius” as Want to Read: 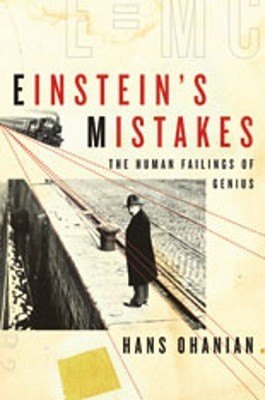 We’d love your help. Let us know what’s wrong with this preview of Einstein's Mistakes by Hans C. Ohanian.

To ask other readers questions about Einstein's Mistakes, please sign up.

Be the first to ask a question about Einstein's Mistakes

Start your review of Einstein's Mistakes: The Human Failings of Genius

Interestingly, Einstein didn't consider intelligence or hard work to be his most important asset. His stubborness got top billing, instead. “He felt that the task of a scientist is to find the most important question, and then to pursue it relentlessly.” But Einstein also had what Dr. Ohanian calls “a remarkable talent for making fruitful mistakes.” His intuition frequently, but not always, guided him to correct conclusions, in spite of his “botched” mathematical reasoning. Some of these mistakes led directly to the discoveries Einstein is best known for: his theories of special and of general relativity. (One quick note: in physics, as in most scientific fields, the word “theory” doesn't mean “opinion” or “conjecture” as it does in everyday usage. Rather, in this setting, the word “theory” is equivalent to “explanation.”)

I was most surprised to discover that Einstein was not very comfortable using math as a basis or proof of his proposed theories; and he made many errors in the mathematical portions of his papers. Whenever he could, he'd partner with another physicist or a mathematician whose job it was to write the part of his papers that involved calculations – and in his later years, he employed assistants for the sole purpose of performing the complex mathematics his work required. Unfortunately, these partners or assistants often were denied the credit due to them, either by deliberate omission, or simply because the name “Einstein” overshadowed any other attached to a project.

Dr. Ohanian has a talent, too, of explaining complex scientific theories in a way that is understandable for the layperson. I appreciated his analogy comparing mass and energy to ice and water. First, in relation to possibly the most famous equation associated with Einstein, E = mc2 [that '2' should be in a superscript, but I don't know how to do that here], he explains that “mass is a congealed form of energy, or an inactive form of energy” or, in other words, “mass and energy are two facets of the same thing.” Then he provides this image: “We can think of the congealed energy hidden in the mass of a body as analogous to the congealed water locked in the Antarctic ice sheet, and we can think of the liquid water on the Earth as analogous to the ordinary energy.” He goes on to provide more detail about, for example, the “dramatic and violent” effects we would see if a great deal of congealed energy – mass – was released at once; similar to the “disastrous flooding of all the coasts” that would happen if all the congealed water – ice – in the Antarctic were released simultaneously. Great visual, isn't it?

Einstein once said, “We all must from time to time make a sacrifice at the altar of stupidity, for the entertainment of the deity and mankind.” It's affirming to know that a stubborn, arrogant genius like Einstein recognized the inevitably and necessity of the occasional error. Perhaps I can be a bit more welcoming and gentle with my own mistakes, too.

Jan 05, 2010 Georgia Hedrick rated it it was amazing  ·  review of another edition
Someone else, read this and tell me if you love it as much as I do.
View 1 comment

Nov 27, 2011 Christian rated it did not like it
Probably deserves zero stars. Stay away.

Einstein succeeded not merely in spite of, but sometimes because of his mistakes. The fruitful mistakes were mainly conceptual rather than mathematical ones. For example, in formulating special relativity he decreed, rather than demonstrated, that light travels at a constant speed in a vacum regardless of how fast you are moving relative to a light source. In general relativity he started with the idea that it is impossible to distinguish in certain circumstances between acceleration due to gra

Einstein succeeded not merely in spite of, but sometimes because of his mistakes. The fruitful mistakes were mainly conceptual rather than mathematical ones. For example, in formulating special relativity he decreed, rather than demonstrated, that light travels at a constant speed in a vacum regardless of how fast you are moving relative to a light source. In general relativity he started with the idea that it is impossible to distinguish in certain circumstances between acceleration due to gravity and acceleration due to some other force. Both of these ideas are to greater or lesser degrees incorrect or at least not consistent with the notion that science has some connection to what one observes. But he overcame both, though he tended to stubbornly insist that there was no problems with either of the above ideas.

I was interested to learn that the physicist Hendrick Lorentz and the mathematician Henri Poincare had formulated parts of special relavivty before Einstein. Einstein though greatly generalized the application of the ideas of special relativity to all of physics, while Lorentz applied his ideas only to electromagnetism. Both Lorentz and Poincare seem to have stuck with the idea that light must travel through a medium like other waves, and thus stuck with the idea that the ether, a hypothetical medium in which light propagates must exist - although they conceded that it could not be detected and that special relativity made its existence redundant. Einstein did not follow their example.

I found it interesting to learn that Einstein did not much like math, which seems rather odd for someone who was a theoretical physicist by profession. His successes resulted from insight into the consequences of physical principles, plus an eye for weak spots in existing ideas. In later years he always had an assistant to help with the math. Many of his papers have mathematical errors. His general relativity could have come out in a satisfactory form earlier had he been quicker to learn the relevant mathematical technique (tensors).

Unfortunately his last two decades were spent in search of a grand unified theory of all the forces of physics, at a time when this was wildly premature. Worse, his fellow physicists could easily spot that his repeated and public efforts on this subject failed even to account for existing knowledge, such as coming out with the correct results for electromagnetism or the effects of general relativity. His efforts were further hampered by his unwillingness to accept the framework of quantum theory as developed in the 1920s. All this failure leads one to the more general question of how long anyone should persist with an idea that does not lead to immediate success. Abandoning the idea after the first reverse may be premature; continuing on and on in the hopes of eventual success however may simply be self-delusion.

Einstein in his private life was not admirable. He seems to have been a serial adulterer. He also did little to ease the living conditions of a son by his first marriage, who suffered from some kind of mental illness and was institutionalized. Although it would appear that some sort of professional care was appropriate, some of Einstein's considerable affluence could have been devoted to ensuring that his son, an intelligent man whatever his emotional problems, did not have to spend decades sleeping in a dormitory.

Dec 27, 2014 J. D. rated it liked it
A very interesting history of Einsteins intellectual endeavors. I came away appreciating that an important source of his genius was his intuition. His mathematical talent was apparently good, but not exceptional; or perhaps he was lazy.

Its still on my pile to be finished, but now on those nights when I can't sleep because of some problem of the day which I keep replaying, then I turn on the light and let Einstein's problems put me to sleep.

It may be too long.
I enjoyed it, but bogged down around page 300.

Its still on my pile to be finished, but now on those nights when I can't sleep because of some problem of the day which I keep replaying, then I turn on the light and let Einstein's problems put me to sleep.

Jan 08, 2009 Bookmarks Magazine rated it liked it
In Einstein

Dec 07, 2010 Eric Pitre rated it really liked it
Very easy to read plus you dont need a Ph.D in physics to understand the content. Simply loved it! 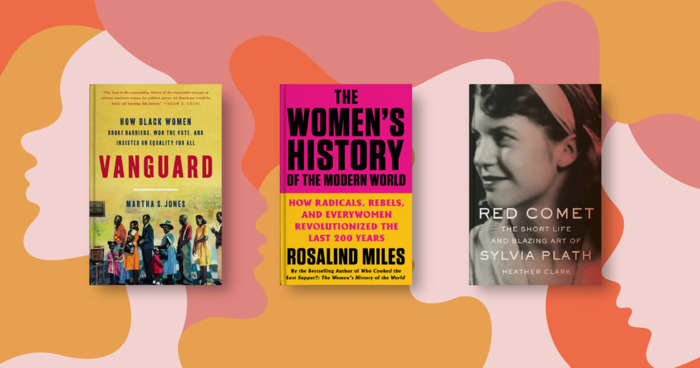 Power, Sister! 20 New Books on Women’s History
Happy Women's History Month! One of the undisputedly good things about modern scholarship is that women’s history is finally getting its due....
Read more...
16 likes · 1 comments