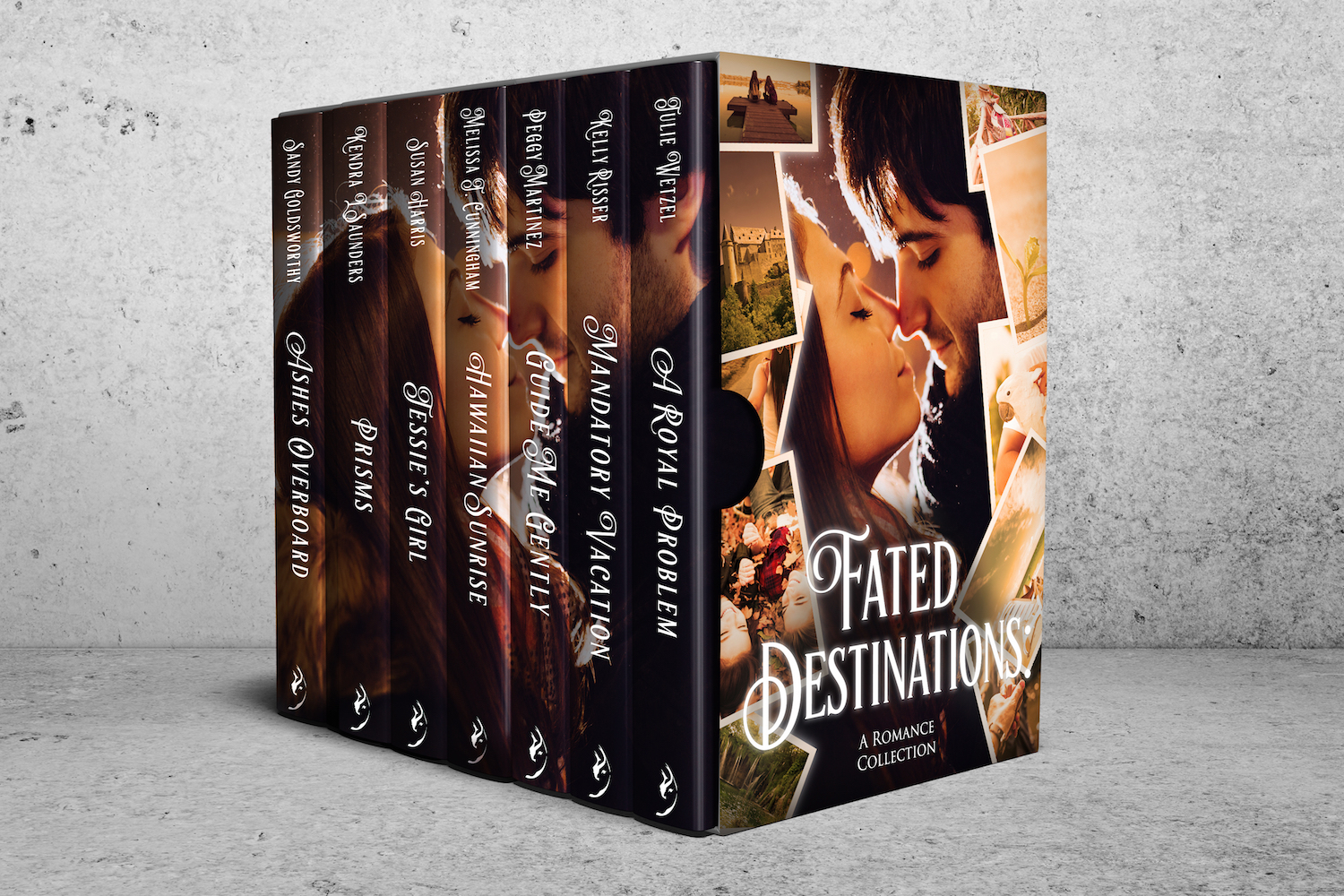 Escape from the everyday with this set of 7 all-new travel-based romances from award-winning authors. These exciting stories span the globe (and beyond!) to spin tales of love and intrigue in exotic locations. Take a mental vacation today with the Fated Destinations box set.

A Royal Problem by Julie Wetzel
Jessie is tasked with saving a set of jewels from pirates that attack her cruise ship. She jumps overboard and swims for shore, knowing only that she must find Lord Marcus at the majestic castle in Ospioria…

Mandatory Vacation by Kelly Risser
When workaholic Natalie Olsen is forced to take a vacation by her new boss, she books a cabana at the private island resort of Hibiscus Cay. But instead of relaxing, she finds herself intrigued by the handsome resort manager who seems to be hiding something...

Guide Me Gently by Peggy Martinez
Alyssa Monroe always dreamed of escaping to exotic locales as a photographer, so she's thrilled as she sets off for Dasia Island. But only one guide is willing to take her deep into a forbidden forest… a sexy, tattooed local who sets her blood on fire and gets her camera finger itching.

Hawaiian Sunrise by Melissa J. Cunningham
Betrayed just before her wedding day, brokenhearted Jamie rents a bungalow on the beautiful island of Maui. Will the tour guide who shows her the island also be able to show her how to trust again?

Jessie's Girl by Susan Harris
After she lost her mother to cancer, Maxine Fox threw herself into drugs, drink, and partying to cope with the loss. When she is expelled from her third school, her father decides to send her to a catholic private school in Ireland. But tattooed bisexual Max is probably not going to fit in easily…

Prisms by Kendra Saunders
The invitation was to a diplomatic peace ceremony on the desert planet of Quassdar. But Quassdar is also known for its steamy sex magick rituals, and it seems like Griffin may have gotten things a little bit mixed up…

Ashes Overboard by Sandy Goldsworthy
For graduation, Aubrey Sheppard's fiancé gave her a dream Caribbean Cruise vacation. The only problem is, their relationship ended before the ship ever set sail. Now Aubrey—an inexperienced traveler—sets out alone, nervous and unsure. A shared cab ride introduces her to someone new, who's also trying to move on with his life…

23 books523 followers
Originally from Ohio, Julie always dreamed of a job in science. Either shooting for the stars or delving into the mysteries of volcanoes. But, life never leads where you expect. In 2007, she moved to Mississippi to be with her significant other.

Now a mother of a hyperactive red headed boy, what time she’s not chasing down dirty socks and unsticking toys from the ceiling is spent crafting worlds readers can get lost it. Julie is a self-proclaimed bibliophile and lover of big words. She likes hiking, frogs, interesting earrings, and a plethora of other fun things.

Every author has their own unique style and creativity and it shines through each and every single story. I loved that the stories contained the right amount of romance and that each one was as refreshing as the last. If you haven't read this little gem yet then put it off no longer.

Allow yourself the opportunity to fall in love with each story within this set.

Tamar Elmensdorp-lijzenga
209 reviews6 followers
January 8, 2017
Two stories stood out to me in this collection.


First Susan Harris’ Jessie's Girl.
It was just such a beautiful and important story. Making the main character bisexual is important. They need representation in fiction. The story was about love. The way Max' family handled her spinning out of control twice, the one teacher that cares and who makes all the difference and, maybe most importantly, then the girl who is willing to see past genders, even though it scares her, and risks just loving the person who she loves. Really, I have no words.
Then Kendra L. Saunders’ Prisms.
Griffin is just the most open and wonderful alien you could ever run into. He’s very secy too and quite a bit naughty. Knowing both him and Daisy from Kendra’s novels Dating an Alien Pop Star and Engaged to an Alien Pop Star, this story was just such a treat to read. Daisy is a strong person and Griffin is just so very silly; but the beauty of it is that it's never fake. He is just like that. And not a thread of him is messing around with you or playing with you. All about him is as pure and as real as it gets. And they made magic.
Displaying 1 - 2 of 2 reviews