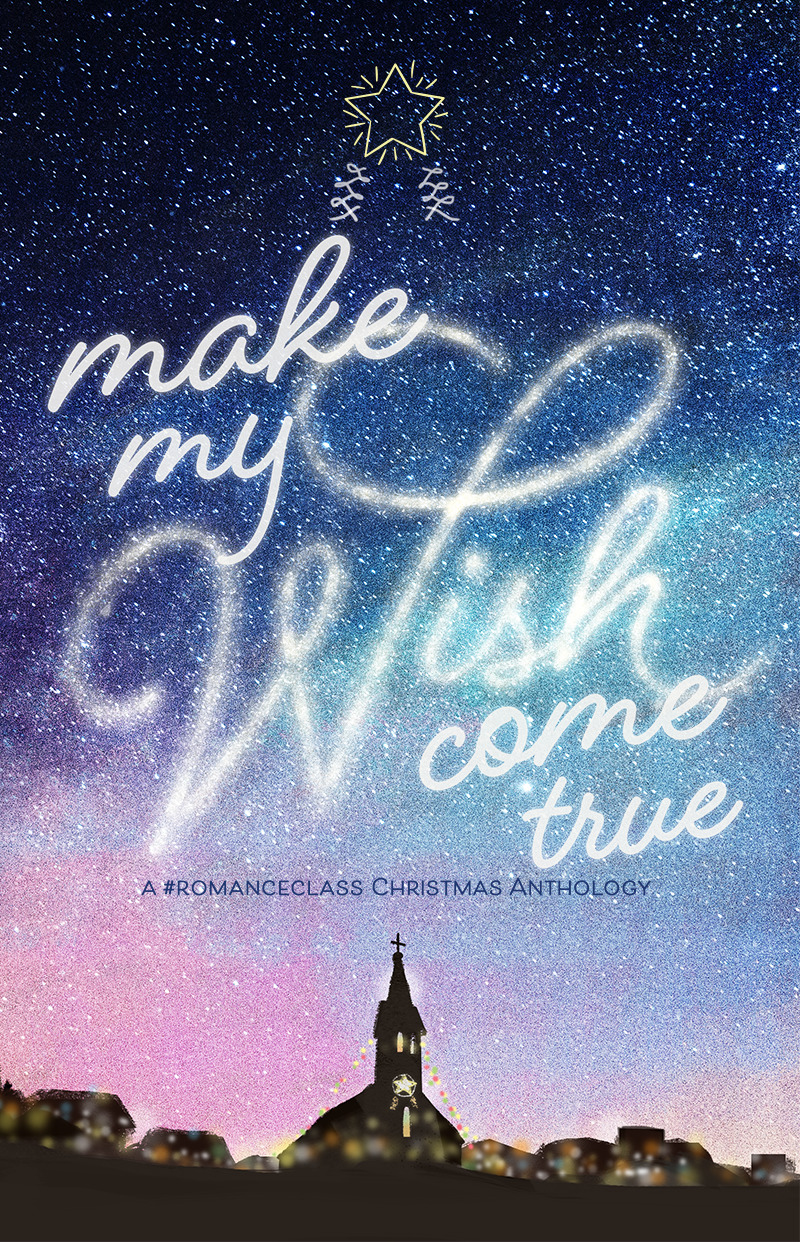 3.95
20 ratings8 reviews
Rate this book
Get ready for feels this holiday season with Make My Wish Come True, a Christmas anthology by #romanceclass authors. Join a Kris Kringle and receive the perfect gift, or learn how to survive your first Christmas in Manila and the steps you need to take to be with the one you love. Go to parties that will not go according to plan, feel the cold (and probably humid) December air as you explore city streets, and count down to five minutes to Christmas. Meet kind strangers and friends that remind you of home, and discover that the one who’ll make your holidays better has been beside you all along. With seventeen stories, there’s something for you here no matter what feels you want and need. Fall in love this Christmas with #romanceclass!

6 books26 followers
Ana Tejano has been in love with words and writing ever since she met Elizabeth Wakefield when she was in Grade 3. She has contributed several non-fiction pieces in print and online publications, and has been blogging for years. When she’s not writing, she works as a communications manager for a payroll outsourcing firm, and serves in CFC Singles for Christ in every other time that she doesn’t spend reading or sleeping. She lives in Metro Manila and is also known by another name in her other circles (but it’s not a secret identity, really).

Gabriel's Checklist by Tara Frejas - 5 stars A perfect introduction to this anthology. This is sweet and spot on. I was initially uncomfortable because the female protagonist keeps using random Korean words, but I was perfect sated because the love interest Gabriel, who's Korean, tried to learn Tagalog words as well. He's properly invested in Filipino culture. It was done in a respecting manner. That's a nice build-up for interracial couple. Bonus: All the food mentions and Tagalog vocabs had me laughing so hard. I really love this story. I was swooning just fine.

Monito, Monita by Celestine Trinidad - 5 stars This is a sucker punch for best-friends to lovers fanatics. I actually teared up. That's how good it is. The characters are well fleshed out, the tension is there. I'm certainly tuning in for Trinidad's upcoming novels.

Happy Christmas, Forever by Rachel Sarah Am Castro - 3 stars A quite lackluster bit, compared to the previous stories. I feel disconnected with the characters, but I love the narrative and the family oriented aspect. It's a common practice for Filipino boys and girls to wait to date until they're "properly" of age and such. That's refreshing to see.

Christmas Chicken Dance by Jay E. Tria - 5 stars
"You stared at her like she was the sun after a week-long storm that day we first met you." Shinta and Jill isn't my main otp from Playlist series, but Tria found the perfect recipe to string my heart. The metaphors and adorable characters always get to me.

Awkward Holiday Dinner by Ysa Arcangel - 4.5 stars Oh dear. This is definitely the most awkward, but hottest holiday dinner ever. I've always loved reading romance books where one of the pairing is a single parent. This one hit me up. I had to fan myself.

Sheryl
472 reviews43 followers
February 6, 2017
Don't you wish, it's Christmas all year round? I do! This was a spill over read from Christmas, not that I'm complaining. ;)

Timely because I also get to tick off a box from my TFG Bingo card. :D

Lynai
523 reviews77 followers
July 16, 2018
Too many favorite stories in this collection. I loved how the stories revolve around a single occasion and how they are delightfully Filipino. I highly recommend this book for any one who wants a good dose of feelings, Christmas time or not. <3

Resty
8 reviews
November 12, 2018
Gabriel's Checklist - 4
The story's good plus the storytelling. There's some grammar errors (I'm not quite sure) but their tolerable. Does the title suit the plot of the story? I'll give you 75/100 for that. It's quite a feel good story but I can't understand the Korean words (thank you for not putting in a lot or you could have put a footnote for those.)

Monito Monita - 4
I can relate to Alex character at some point. I love the big reveal at the end of the story, loved how Cecilia proposed to Neil. What went wrong? I guess it's the dialogue (other words/phrases don't fit the characters personality). I'm not really good with grammars too, but I can find some errors plus technicalities that was overlooked by the author/editor.

Happy Christmas Forever - 3
I can't relate to Sasha's story. (it's my second time reading the story before I type this review, so I've got some prejudice about it that's holding me back from reading it again). But yeah, this review's based on my second read, I think that the story is all over the place, I mean there were too many things happening at once for a short story when the only conflict of the character is her own indecisiveness of saying yes to her forever. I can't relate to Sasha because my Aunt can't get me an Audi for Christmas and so much more reasons that I feel disconnected to her. This review would be too long if I point out every technicalities about the story but yeah, I don't like that this one short story has too many stories in it.

Christmas Chicken Dance - 5
There's so many things that I love in this story so yeah, giving it a five, weighing the faults over feels, I choose my feels ;).

Awkward Holiday Dinner - 4
It was actually a good story but it appears to me as a part or chapter from a standalone book, maybe a special chapter? So I'm giving it a four because it is 'bitin,' a little steamy which I don't think helped the story move along to that awkard dinner. It's no awkward dinner at all because I couldn't feel the tension between the characters, the awkward thing I found is the situation that they're in but not the dinner itself.

One night in the Streets of Makati - 5
That was too freaking intense. I mean, it literally hit me in some way or another. I'm still hesitant about Stephen's job though ;).

Nico Saves Christmas - 5
A fun read. Got me interested of what's Nico's gift to Rhys is. Haha.

All you needed - 4
Smooth. No complications in the story itself except Damon's inner struggle of telling Andrea about his mom. Bitin.

The Last Merry Christmas - 4
The story's fluid. I mean, it has all the (writer thing) elements of a good story and I like the premise but I don't think Warren's Christmas break up story was enough to tear me up. But I do love Hope :)

Christmas Weddings Makes the Best Lovers Quarrel - 4
Cristy and Kyle's story's hot but not enough to infect me. The story's so good that I want to be part of the wedding.

A Different Kind of Christmas - 5
I love the story. Yey. Generic but I did. I almost cried but I feel it. I feel the story and can relate to it fully (or not.) Haha.

Five Minutes til Midnight - 5
I'm going with my feels and giving it a five. Some sentences weren't structured well. Dialogues are somewhat messy. But yeah feels over rules.

In the City of Angels - 4
There were some part that I don't get but overall the story is good and has left an impression on me.

Holiday Crush - 4
Oops. Don't judge me. Haha. I love the story but your male character's voice sounds like a female to me. Haha. I'm sorry, hadn't been for that I'll give it a five.

Merry Christmas Maggie - 5
It's actually a chilly good vibe story. Some parts were somehow messy but I can tolerate it so yep a five.

And I'm running out of words

Back for Christmas - 5
I'm really really hesitant about giving it a four or five stars but yeah, I gave it a five. On the first few parts of the story, I'm a little bit disappointed that it isn't in third or first POV because clearly it was home for every reader (and writer). But I'm glad I continued reading the story, because yeah I wouldn't have felt the struggle of a wife returning back to his husband and yeah, it is indeed a Christmas miracle.

kb
666 reviews18 followers
August 23, 2017
WARNING: THIS IS NOT A REVIEW! But I do talk about this book on my vlog here, in which I'm also giving away a signed copy. I recommend you click the link (here it is again) so you can see the inside pages, plus my face (haha)! Happy holidays!

Sab
299 reviews91 followers
December 26, 2016
Review to come because I don't know how to properly review anthologies yet tee hee.
Displaying 1 - 8 of 8 reviews