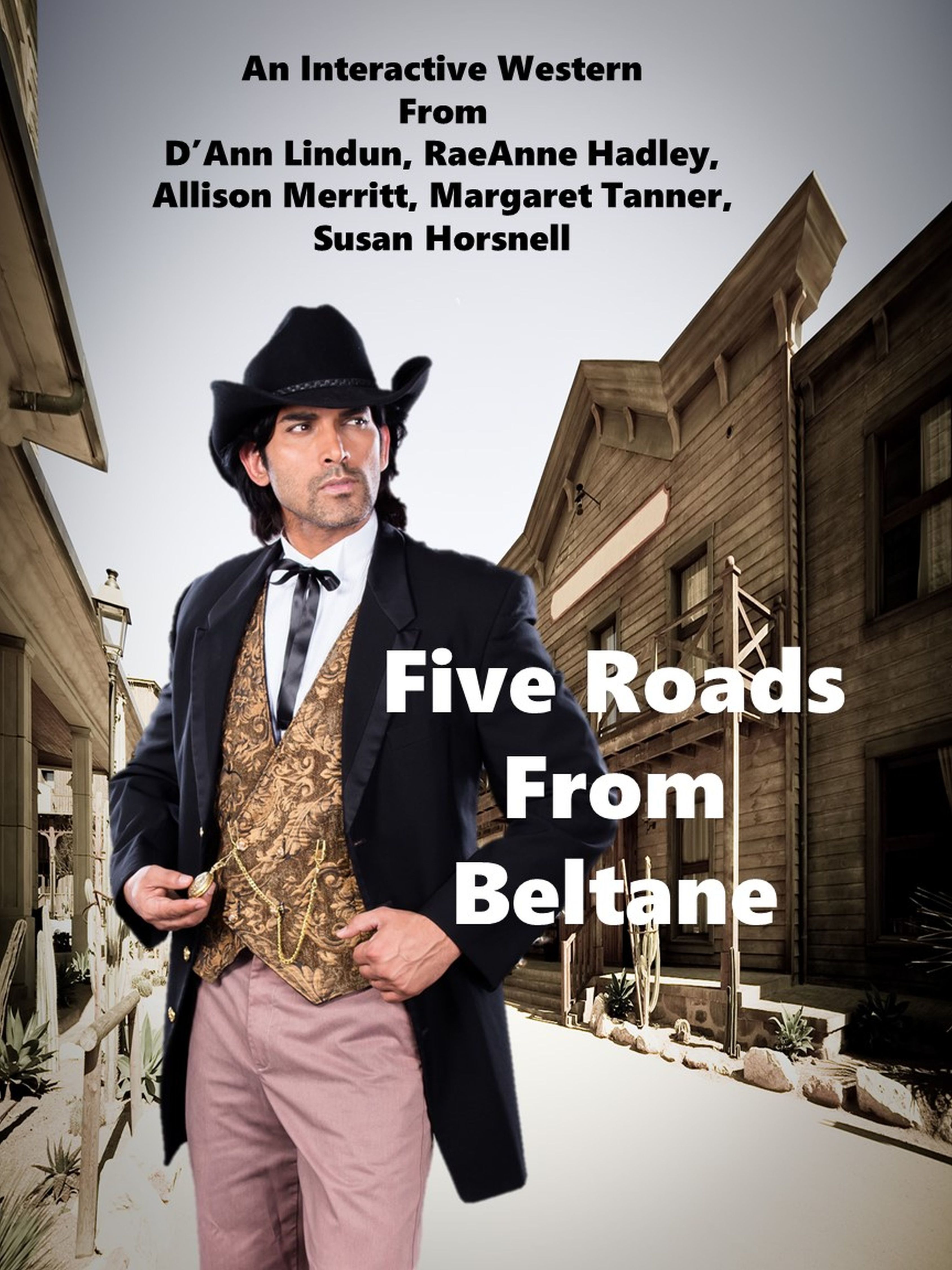 4.29
51 ratings6 reviews
Rate this book
Are you ready for something different?
D'Ann Lindun, Margaret Tanner, Allison Merritt, RaeAnne Hadley and Susan Horsnell present Five Roads From Beltane, a new concept in reading.
One beginning, 5 different endings to choose from.
Five books in one.
Western Genre.
Which path will you follow?
Will it be:
Hannah and Roan by D'Ann
Jessica and Ethan's story by Margaret
Mr. Joseph Wade by Allison
Jacqueline Hamilton and Billy Williams by RaeAnne
or
The Bank Robbers story by Susan?
The choice is yours.
Once you have followed one path, at the click of a button, you are taken back to the beginning to choose another. In total you have five entirely different stories, five different characters to complete the beginning.
The stories vary in length from 20,000 words to 30,000 words.
Five Roads From Beltane.
"How does a Bank Robbery affect the people who were present?"

139 books167 followers
I was born in Manly on the Northern Beaches in Sydney, Australia and grew up in the west after we moved there to help my brother’s eczema which was made worse by salt air. I now reside in the beautiful sunny state of Queensland.

My dad had the biggest impact on my life. I have always had an overactive imagination and would often tell him stories which floated in my mind. He encouraged me to put pen to paper convinced that one day they would become published books.

Apart from marrying the love of my life, the highlight of my life was being accepted into Nursing just before my 16th birthday. It had been a long-time dream and one which encompassed 37 years of my life. Along with nursing, being married to a Naval Officer for almost 47 years, and posted in numerous places, gave me experiences which I have written into many of my books.

We enjoy traveling the country with our Caravan/RV, and Jack Russell puppy by the name of Gemma who will be joining us.

As my parents were British, never Australian citizens, I hold dual citizenship and we plan to take advantage of this to spend two years traveling the UK and Europe in the near future. It will also give me the opportunity to catch up with many family members who reside in England.

My books are in various genres - Western Historical Romance-both steamy and sweet, Contemporary Romance-steamy and sweet, Male/Male, Australian Outback and City Romance. I also have one menage and one paranormal romance along with two children's books. As I said earlier, I have a rather overactive imagination.

I hope you will pick up one of my books and when you close the cover on one of my stories it will be with a satisfied sigh.


You can email me at: 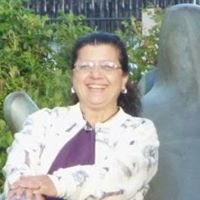 This was a great reading experience and I want to read another interactive book. Each story was exciting. I didn't go in order but chose the story by the characters. Highly recommend it to everyone who wants an adventure!
Notes From 'Round the Bend
161 reviews3 followers
May 22, 2017
When I read the description, I was reminded of the Choose Your Own Adventure books I read as a child and was intrigued by the idea of choosing which path/character to follow, as opposed to choosing different endings for the same character. I let the nostalgia of my childhood and my adult penchant for romance talk me into this.

I decided to start with Susan Horsnell‰Ûªs tale focusing on the bank robbers. Here‰Ûªs where my pet-peeves-as-a-reviewer came into play. There were typos from the jump; inconsistent capitalization (‰Û÷Bank‰Ûª not being capitalized in the name First National Bank), random switching between past and present tense, etc. That sort of thing aggravates me to no end! Authors, you have an interesting, unique thing going here, so why tarnish it with poor editin

g? Please get an editor, or give it another read-through of your own and polish it up!

For the above reason more than anything, I decided to shelve Ms. Horsnell‰Ûªs tale and try one of the others. I started on the path of Jacqueline (often referred to as Jacque) and Billy. Their story had fewer typos, though at times the sentence structure and phrasing was a little confusing. While I didn‰Ûªt feel particularly invested in either of them, their story was sweet. It‰Ûªs easy to tell who is the good guy and who is the bad guy and sometimes that kind of simplicity is perfect‰ÛÓespecially in a Western, where a hard and wild life can make those lines a little blurry.

For me, Hannah and Roan‰Ûªs story was an unexpected gem. I could admire Hannah for her strength, willingness to go after what she wanted in spite of the danger, and her determination to fight alongside her man. Roan was big enough to accept that in her and balance his need to protect her with respect

for her strength of character. Together, they set out to right a wrong and it was nice to see them pursue a clear purpose. The dialogue flowed naturally and the descriptions are picturesque. This story also had a much more polished feel, which I appreciated greatly.

I don‰Ûªt really know how I feel about the way ‰ÛÏFive Roads From Beltane‰Û was carried out as a whole. The idea that the bank robbers ‰ÛÏcarry through each story and can vary from one story to the next‰Û didn‰Ûªt really sit right with me. Being told that they could be criminals in one place and outright murderers in another story seemed a little‰Û_lazy. Yes, five different authors with five different minds and writing styles collaborated on this, which I think is great, but I personally feel like keeping the same personalities from story to story would have truly elevated ‰ÛÏFive Roads From Beltane‰Û to a master-level endeavor. As it stands, the idea was great in theory but somewhat less so in execut

Bottom line: An interesting concept that‰Ûªs pulled off moderately well. I didn‰Ûªt really love it or find anything particularly compelling about a few of the stories, but it wasn‰Ûªt awful, either. If you enjoy Westerns and Choose Your Own Adventure stories, ‰ÛÏFive Roads From Beltane‰Û is worth a look.
Rachael
762 reviews3 followers
November 16, 2016
Hannah and Roan by D'Ann Lindun - I loved this ending. I am a big fan of D'Ann's writing and was so excited to learn that she was part of this interactive book. I loved Hannah and Roan. D'Ann's characters are always well written and her stories are engaging.

Jessica Smith and Ethan Beveridge by Margaret Tanner – I was intrigued by Jessica and Ethan’s interaction during the bank robbery and chose to follow this path second. I enjoyed this story. It is full of adventure and misconceptions.

Jacqueline Hamilton and Billy Williams by RaeAnne Hadley – Jacqueline is on the run from an abusive ex-fiance and is kidnapped by Billy. Can she convince him to set her free?

Mr. Joseph Wade by Allison Merritt - I really liked Lucy and Wade. Wade is out for revenge and it leads him to a life of crime. Lucy sees the good in Wade and tries hard to convince him to lead a respectable life.

The Bank Robbers by Susan Horsnell - I loved this author's story of what led the bank robbers to commit the crime. I thought it was very creative and unexpected. I would love to read more books by Susan Horsnell.
Robyn Corcoran
1,817 reviews44 followers
October 5, 2016
5 Roads from Beltane
I love this idea of different endings!
Susan Horsnell's sweet romance is a delight to read, added is the suspense and a touch of humour as well.
D'Ann's story brings us two great characters who instantly dig deep into the reader's heart. Raw, strong characters that don't wait for others to solve their problems.
Raeanne Hadley treats us to a lovely romance between a bank robber and one of the victims in the hold up. You can't help but like both characters and dislike the nasty character who is described so well.
Allison Merritt provides us with something different again with more mystery than just the bank robbery.
Margaret Tanner's enemies to friends story shows just how hard the west was at that time. She brings to life, with her words, emotions from fear and anger to excitement and happiness.
This is a thoroughly enjoyable book and I dare you to only read one or two endings! 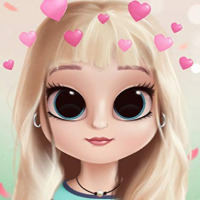 Leanne ~ Tales From The Heart
1,818 reviews16 followers
October 6, 2016
Such a brilliant concept, it was like getting 5 books in one. Each one totally unique with different writing styles and yet they blended well. A bank robbery occurs in chapter 1 and then chapter 2 onward goes in 5 different directions. One about the robbery and why it happened and the rest about the other characters in the mix. There is action in the old west along with romance, drama, kidnapping and love. There will be characters you love and others you love to hate. This author Susan Horsnell did a fabulous job with this concept and introducing other authors into the mix for us to discover. I highly recommend this book for fans of romance.

Sandra Newton
471 reviews5 followers
February 12, 2018
A very creative and entertaining way with a twist to story telling. One bank robbery with five different endings. Each story has the same beginning but completely different out come. I highly recommend you read this very creative way to tell a story. A wonderful bonus to story telling. 🌟🌟🌟🌟🌟
Displaying 1 - 6 of 6 reviews