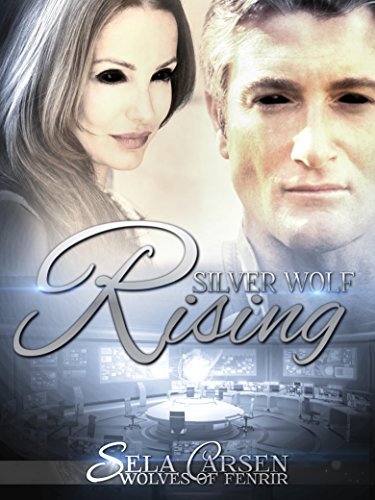 4.29
21 ratings2 reviews
Rate this book
Dagny tärEinar is on her way to Earth to start her new life. Not that she knows what that’ll be like – a long-time widow with grown children, she hardly knows who she is anymore.

Being forced into retirement is turning him bitter. Niall sidKalvr knows it, but he can’t help it, either. He’s ending his long career in the Fenrir Army to become a farmer, of all things.

Neither of them expect to be saviors, the leaders of a small rebellion. But when enemy soldiers invade their pack ship, Niall and Dagny are forced to work together to protect and care for their shipmates and themselves, despite the distracting life-scent trying to draw them together. A scent that indicates they’re meant to be together for the rest of their lives.

However long – or short – that may be.

30 books111 followers
Short version:
Sela Carsen is an award-winning author of paranormal and sci-fi romance -- with or without sex and dead bodies. Your pick. She maintains a permanent nerd-on for fairytales and mythology, and openly hoards reference books about obscure folklore. Born a wanderer, she and her family have finally settled in the Midwest. Until they move again, at least.

Long and rambly, but funnier version:
In addition to writing, I’m a wife to a Darn Near Perfect Husband and mom to Two Great Kids. They used to be the Monkey children, but they seem to have settled down a bit. (That’s going to come back and bite me on the butt as soon as you read this!)

I have a BA in French (utterly useless, but fun at parties) and another BA in Communication. While I was getting the Communication degree, I wrote for my alumni magazine, dipped my feet into advertising, took want ads at the local paper and even wrote obituaries. I was also a reporter at a small-town daily, but soon realized I didn’t have a true journalist’s instinct.

After that, I was busy being married and having children, but when my youngest was about a year and half old, I was standing in the shower when a scene popped into my head. Why does that always happen when you’re in the shower and you can’t get a pen and paper? Anyway, I got the soap out of my eyes, dried off and headed straight for the computer where I wrote it all down.

And boy, did it stink. Whew!

I’d been reading romance novels for years so I figured I should be able to write one, right?

Are you done laughing? Let me know when you’re finished.

Ok, then. It took about twenty false starts and a work I now call The-Regency-That-Wouldn’t-Die before I finally got disgusted with myself and started writing this funny little scene in a Louisiana cemetery. That little scene became Not Quite Dead and it’s the first manuscript I ever finished. After much angst and rewriting on my part, I eventually sold it to Samhain Publishing, who released it in August 2006.

Since then, I’ve placed several other stories, but that first one will always be special to me.

I’m a member of Romance Writers Of America and can usually be found at the bar during national conferences.

4.29
21 ratings2 reviews
5 stars
12 (57%)
4 stars
5 (23%)
3 stars
2 (9%)
2 stars
2 (9%)
1 star
0 (0%)
Displaying 1 - 2 of 2 reviews
Pilar Seacord
540 reviews1 follower
September 26, 2016
Niall sidKalir is a hard nosed drill sergeant forced to retire due to a limb missing from the knee down during battle. He is not happy feeling used up and useless. Dagny tarEinaris a bored widow, empty nester who has decided to visit her daughter on earth and see some sights. Their meeting does not start off well. Dagny steps on Nialls toes and he is rude to her. To late he realizes she is his lifemate. They have no time when they hear laser fire and Dagny sees a dead man in the hallway. Niall has to keep Dagny calm and quiet and get to the armory. The ship is being invaded by the axis. The Strathori a soft bodied race who wear exo-skeleton suits to survive anywhere but their planet. I love that this story had a mature couple with the same feelings and desires as anyone younger. There is humor,fun, adventure, action, romance and sexiness. Niall is stubborn and has to get over his insecurities about his leg. Full packed 97 pages. Great cover professionally done looks great.
Sylvia
341 reviews5 followers
May 3, 2017
Niall feels he is a washed up warrior, and is on his way to civilian life when he meets Dagny. Dagny is a widow and a mother of grown children. Their first meeting was not what anyone expects. They are both at a tailor, when aliens attack the area where they are at. They both are fighting for their lives when they realize they a fated mates.
This is a nice story for the older set for a change. It shows love can be found at any age.
Displaying 1 - 2 of 2 reviews