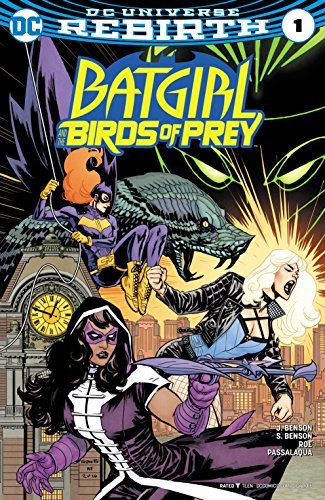 Batgirl and the Birds of Prey (Single Issues) #1

Batgirl and the Birds of Prey #1

3.77
159 ratings20 reviews
Rate this book
“Who Is Oracle?” part one! Someone has stolen the name Oracle right out of Barbara Gordon’s past! Hot on this false Oracle’s trail, Batgirl, Black Canary, and Huntress are all tracking the same mafia capo…so it makes sense to team up, right? Problem is, Barbara and Dinah need the secrets locked up in Oracle’s brain…and Helena Bertinelli would rather put a crossbow bolt right through it! 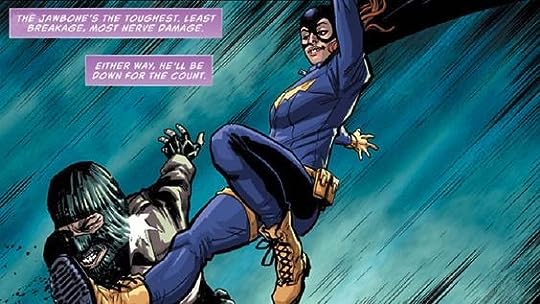 This art was just so unappealing to me that it kinda ruined the issue. Which is a shame, because I really wanted to like it. And maybe it's unfair of me to judge it that way, but I can't help the way I felt while I was reading it.
Ugh...
*shudder*
I don't even understand why I had such a bad reaction to the art because I've certainly seen worse, but there's something about it that sets my teeth on edge. 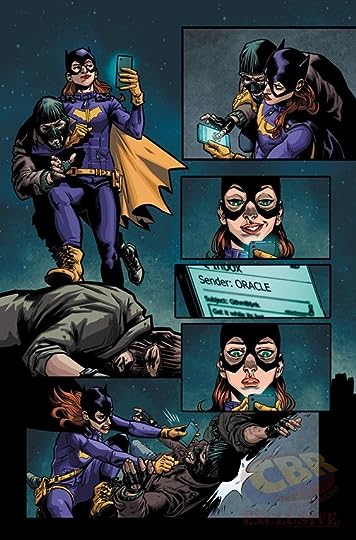 And it's probably just me!
Anyway.
So Babs gets hacked, and turns to Black Canary for some backup. It's time to get the band back together! <--not really, cuz BC just quit her band...hyuck, hyuck!
Along the way, we get an origin story for Batgirl, complete with the missing Oracle years. I thought that was a nice touch, but it seemed a little odd at the same time. Especially considering that it seemed like she didn't have any memory of this time when Simone was writing her.
Then again maybe this is some Rebirth thing?
Honestly, the more of these Rebirth titles I read, the less I'm convinced they have anything new to offer to the story.
I'm kinda bummed. 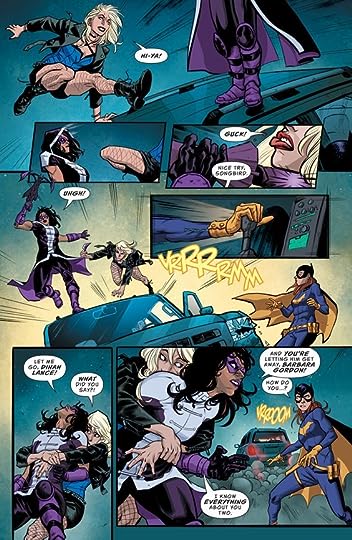 Oh, and remember Helena from the Grayson title?
Well, she pops up in this and makes quite an impression on our Birds.
Will she be a friend or enemy? 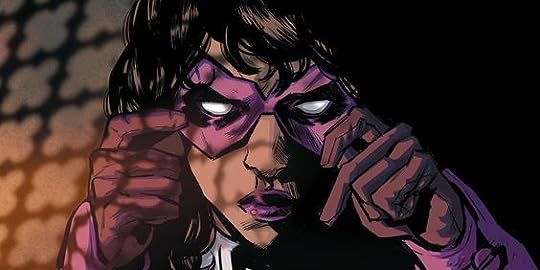 I'm not sure I care.

Dr Rashmit Mishra
686 reviews92 followers
December 14, 2017
OK So here's the Thing - this is a fairly decent issue with enough action and mystery to keep you happy and the whole secret Oracle-imposter is also a genuinely nice plot but The art is really letting the issue down.

The art is really awkward to say the least with facial expressions of the characters really not making any sense with the surrounding , even the general sketch of all the characters whether they are standing , fighting or sitting on a table looks off . The colouring is actually good though it's the sketches that are killing this issue though

The plot was faily average with the main point being the formation of the Birds of Prey and the introduction of a villainous group looking to overpower the Birds of Prey . Much hype for this issue went to Black Canary and Huntress which made another negative point for me i.e lack of Batgirl , i mean i could point out every wrong move Barbara made and it was almost like in trying to make Huntress and Black canary look cool Shawna Benson just made Batgirl seem lame

Batgirl and the Birds of Prey continues to make the same mistakes as Batgirl of Burnside, but... somehow worse? Maintaining the retcon that Barbara Gordon is suddenly abled, beautiful and young (far younger than Dinah) is gross on many levels- but really, really ableist. This book basically throws it in our faces: even when we're shown Barbara in the scene where she is paralyzed and then sexually assaulted, her main takeaway? She can't eat marshmallows anymore because it reminds her of that night, when she drank hot chocolate (as opposed to previous continuities where there are. actual relevant to the issue- she couldn't answer the door for months, couldn't stand Hawaiian-print shirts...).
The worst part is making Oracle, a monicker dedicated to one of the most visible disabled characters, into a villain character. I'd say they're , but that'd honestly be giving DC too much credit. They're going to milk this 'Barbara is the Only Batgirl' until it stops making money- which it should. This is honestly the worst and shallowest reading I've seen in a comic for a long time... The characters don't even remotely resemble themselves (even their new 52 counterparts!) and the appeal to characters by getting Helena to is soured by the fact that we have no background for the iteration of this character. And, whatever degree of religious Helena might be, she definitely wouldn't - and, c'mon, the whole 'Full Name Instead of Superhero Identity' shit at the end was so childish. This is tragic writing for a rebirth story that could've returned the Birds of Prey to their full glory, but instead fell flat on its face with shallow regurgitations of characteristics you could get from skimming a Wiki page and the demonization of one of the most popular disabled characters in the DC universe.

The Sapphic Nerd
945 reviews45 followers
September 20, 2016
Okay... Maybe I could give this series another chance. Issue #1 is actually decent with Black Canary and Batgirl more in character than the Rebirth issue. Huntress is exactly the hellcat I expect her to be! 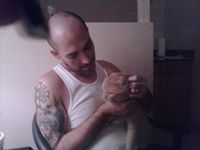 mike andrews
852 reviews3 followers
October 2, 2016
Canary and Batgirl make an awesome pair. This is one of the top Rebirth titles I've read.

Patrick
2,118 reviews17 followers
December 14, 2017
This issue brought me in a lot more than the Rebirth special did.

Wayne McCoy
3,801 reviews22 followers
December 14, 2017
'Batgirl and the Birds of Prey #1' by Shawna Benson and Julie Benson with art by Claire Roe is a really fun start to a series.

I've been a Birds of Prey fan since the TV series, which I alone probably liked. This issue worked on a lot of levels. I love the new Batgirl and her humor works here in spite of the more serious things going on.

I received a review copy of this issue from DC Entertainment and NetGalley in exchange for an honest review. Thank you for allowing me to review this comic book.

Andrew
503 reviews7 followers
December 14, 2017
Not quite as good as the Rebirth issue, but I still love the dynamic between Batgirl/Canary/Huntress. Definitely gonna stick with it for a while.
Brendan
1,197 reviews55 followers
August 21, 2016
Leading somewhere but nothing grand at this stage. I've found a new found love for Batgirl but this series hasn't a tone like the others. I like the team and hopefully this develops quickly.
Patrick
1,003 reviews6 followers
September 9, 2016
*3 and a half stars*

Kim
381 reviews75 followers
December 14, 2017
Pretty decent! I'm reading too much at the moment though so might drop it for a little bit and pick up in trade.
Gustavo Daniele
13 reviews
December 14, 2017
art took a really deep dive in quality

Rachel
765 reviews14 followers
January 3, 2017
Talk about a witty comic. Second rebirth comic that I have read, and it is a whole lot better than batgirl. Can't wait to see what happens next!
Displaying 1 - 20 of 20 reviews