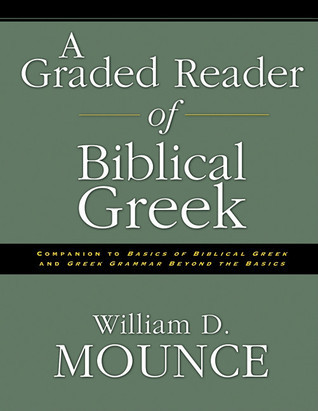 A Graded Reader of Biblical Greek

4.04
68 ratings2 reviews
Rate this book
Making the leap from the basics of biblical Greek to its real-life application can be a frustrating challenge for students of intermediate Greek. A Graded Reader of Biblical Greek was developed to make the transition easier.

It takes beginning exegetes from simple to progressively more difficult biblical texts. Students can now learn New Testament Greek the way they would any other language: through a graded program. A Graded Reader of Biblical Greek applies an inductive method to learning intermediate Greek grammar. It provides a workable introduction to exegesis, word studies, and developing a large vocabulary; and it assists the student in preparing for class, allowing classroom time to be put to its most effective use.


Twenty Greek passages are presented in graded order.
Difficult and unfamiliar grammatical constructions are explained.
All words that occur fewer than 20 times in the New Testament are defined.
An "Exegetical Discussion" section helps the exegete gain a deeper understanding of the language.


A Graded Reader of Biblical Greek is the result of ten years of use and refinement by the author in an actual classroom setting.

38 books45 followers
William D. Mounce (PhD, Aberdeen University) lives as a writer in Camas, Washington. He is the Vice President of Educational Development at BibleGateway.com and the president of Biblical Training, a nonprofit organization offering the finest in evangelical teaching to the world. See BillMounce.com for more information. Formerly he was the preaching pastor at a church in Spokane, a professor of New Testament and director of the Greek program at Gordon-Conwell Theological Seminary, and a professor of New Testament at Azusa Pacific University. He is the author of the bestselling New Testament Greek resources, Basics of Biblical Greek, and served as the New Testament chair of the English Standard Version translation of the Bible.

4.04
68 ratings2 reviews
5 stars
26 (38%)
4 stars
22 (32%)
3 stars
17 (25%)
2 stars
3 (4%)
1 star
0 (0%)
Displaying 1 - 2 of 2 reviews
Jesse
9 reviews2 followers
Read
May 28, 2013
I would highly recommend this workbook for students who have just completed introductory studies of Koine Greek. The graded reader provides passages from the New Testament from easier passages to more difficult ones, however I did not find that to quite be the case in this book--some of the chapters seemed to be more difficult than some of the later chapters and vice versa. The last chapter is actually one of the easiest in the entire book.

The layout is user-friendly, for the most part. Each passage is about three or pages (double-spaced) long, which is certainly a suitable amount to learn from. Below the Greek text are footnotes for new vocabulary words. Mounce says in the introductory pages that they are words used 10 times or less in the Greek NT, and thus are provided because his Basics of Biblical Greek grammar lexicon in the back only lists words used 10 times or MORE. His Basics textbook makes the reader memorize vocabulary used 50 times or more, so his Graded Reader is designed to force students to use the lexicon in Basics for words used 11-49 times while going through the graded reader, while the graded readers supplies those used 10 times or less. But this is certainly not the case, as every chapter lists numerous words in the footnotes used more than ten times, while numerous other words used between 11-49 times need to be looked up. But this isn't a big deal as the reader still gets enough practice looking up words. The real frustration is when Mounce isn't consistent with the definitions and glosses of some of these new words in the footnotes. A definition for a given word in an earlier chapter will have a slightly different or bigger or smaller definition for that same word that is footnoted in a later chapter.

Below the footnotes for the vocabulary is the footnotes section for grammatical explanation. This is beneficial for the reader as intermediate grammar is gradually introduced. Mounce also uses this section to ask theological questions based on the Greek text, or to sort of quiz the reader and remind the reader of certain constructions learned in the Basics book. For example, "what kind of genitive is this?" Or, "what is this pronoun referring to?" However, I found that too many theological questions were asked that belong more to a theological book (or a theological class if this book is being used in a Greek classroom) whereas the student needs to stay more focused on learning the language first.

While the footnotes systems come in very handy, Mounce again is inconsistent with it as there are many times where he uses the vocabulary footnotes apparatus for grammar explanation/questions, and vice versa.

Two appendixes are featured after the Greek text chapters. The first appendix is a very handy super-abridged version of Daniel Wallace's Greek Grammar Beyond the Basics, where readers are introduced and given brief explanations on intermediate grammar. Readers are encouraged to look up constructions that they can't figure or are prompted in the grammar footnotes. This provides a way to smoothen the road between beginning and intermediate grammar. The second appendix is the author's own phrasing of each chapter. While Mounce believes highly in phrasing, I believe in understanding the text at it stands written and don't believe as much emphasis on phrasing is needed as Mounce does.

Still, this grammar not only supplies solid footing for advancing one's knowledge of Koine Greek grammatically and semantically.

Brantley
28 reviews9 followers
September 8, 2012
I used this reader as a homework book for my Intermediate Greek Grammar class. Overall it seemed to have a good selection of passages that progressively increased in difficulty.