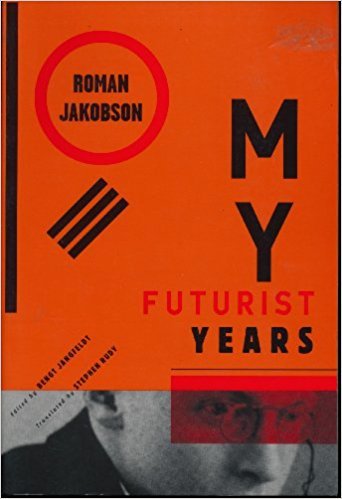 3.92
26 ratings3 reviews
Rate this book
An important collection of writings and memoirs on the Russian Futurist movement from one of America's pre-eminent linguists and literary theorists.Born in Moscow in 1896, Roman Jakobson brought an extraordinary rare poet's sensibility to his exploration of language. This volume, which fills a major gap in the literature of the Russian avant-garde, is a lively collection of letters, memoirs, poetry, prose, and essays. It includes recollections of Mayakovsky, Khlebnikow and others.

As a pioneer of the structural analysis of language, which became the dominant trend of twentieth-century linguistics, Jakobson was among the most influential linguists of the century. Influenced by the work of Ferdinand de Saussure, Jakobson developed, with Nikolai Trubetzkoy, techniques for the analysis of sound systems in languages, inaugurating the discipline of phonology. He went on to apply the same techniques of analysis to syntax and morphology, and controversially proposed that they be extended to semantics (the study of meaning in language). He made numerous contributions to Slavic linguistics, most notably two studies of Russian case and an analysis of the categories of the Russian verb. Drawing on insights from Charles Sanders Peirce's semiotics, as well as from communication theory and cybernetics, he proposed methods for the investigation of poetry, music, the visual arts, and cinema.

Through his decisive influence on Claude Lévi-Strauss and Roland Barthes, among others, Jakobson became a pivotal figure in the adaptation of structural analysis to disciplines beyond linguistics, including anthropology and literary theory; this generalization of Saussurean methods, known as "structuralism," became a major post-war intellectual movement in Europe and the United States. Meanwhile, though the influence of structuralism declined during the 1970s, Jakobson's work has continued to receive attention in linguistic anthropology, especially through the semiotics of culture developed by his former student Michael Silverstein.

3.92
26 ratings3 reviews
5 stars
7 (26%)
4 stars
11 (42%)
3 stars
7 (26%)
2 stars
1 (3%)
1 star
0 (0%)
Displaying 1 - 3 of 3 reviews
Jonfaith
1,821 reviews1,322 followers
February 8, 2021
This is a collection of elements, one cobbled together with more than a few purposes. The first element is an oral history of Russian Futurism that Jakobson conducted with the editor at the end of Jakobson's life. Very interesting, though the transliterations of the names was a distraction. The hijinks with Shklovsky, Khlebnikov, Mayakovsky and the latter's bohemian bed-mates Osip and Lilya Brik make this a fascinating section, though lacking Shklovsky's flair for capturing the same milieu.

The letters section are largely to Elsa Triolet, written while Jakobson was a low-level diplomat in Prague and dazzling student at Czech universities. As noted, these letters were more personal in nature than theoretical. Often, they prove petulant.

The essay section is worth the price of admission, especially On A Generation That Squandered Its Poets which details the fates of Blok, Yesenin, Khlebnikov and especially Mayakovsky. All are positioned by the critic as intrepid forces against Byt, that peculiar element that stabilizes and decays all dynamic vision. Byt can appear in myriad guises: the all too human gravity of human sloth and quotidian necessity.

The collection ends with a collection of poems, which unfortunately pale against the early highlighted verse of Khlebnikov and Mayakovsky.

Griffin Alexander
182 reviews
January 26, 2021
A must-have for anyone interested in the political-historical-aesthetic context of the Russian Revolution and Russian Futurism. We have here what is (I think) the only english translation of Jakobson's essay "On A Generation That Squandered Its Poets," the most well-known essay dealing with the suicide of Mayakovsky and his contribution to world poetry. There are numerous essays on all things avantgarde, and written at a time when these writings were involved in active ideological battles over the worth of the things being written about (e.g., surrealism, dada, formalism, futurism, modernism). On top of this there's a good hundred pages of Jakobson's memoirs (as per the title of the book), that are an invaluable look into the personalities of the time (e.g., Mayakovsky, Khlebnikov, Kruchenykh, Bely, the Briks, Shklovsky, Pasternak, Malevich), not to mention the political and social context of the revolution.

A particularly heartwarming section details the first two or so years after the revolution in Petersburg, before Kronstadt, when the anarchists squatted the old aristocratic palaces, everyone made the most-modern of art, and all met up (Bolshevik, anarchist, and everywhere in between) at night at the Stray Dog Cabaret to talk art, life, and politics until the wee-hours of the morning. Jakobson lived through the most crucial world events of the twentieth century, and was somehow at its center as someone continually evaluating the effects from within them. He really put any aspiration toward bohemianism I might have to shame—at one point he speaks of his time in Riga as a poor student, reading and writing all day, living in an unheated room, and only able to afford to eat three times a week. There is somehow a beauty in his privation, and a fondness for it too, that is made palpable as Jakobson recounts his life story to the editor of this book (Bengt Jangfeldt) soon before his death in the 1990s. Jakobson, better known as one of the cornerstones of structuralist theory, is here as human and alive as any, and his life and work are worth experiencing.

Gretchen
12 reviews1 follower
January 26, 2011
Being a futurist poet is the one thing Roman Jakobson did not perfect. Enough said.
Displaying 1 - 3 of 3 reviews