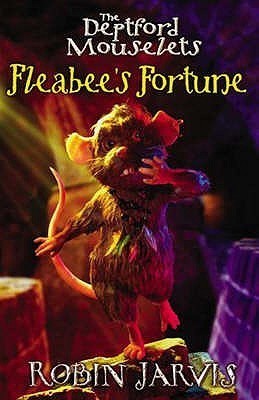 3.73
41 ratings3 reviews
Rate this book
The great rat festival of First Blood is approaching, by which time Fleabee, daughter of Rancid Alf, must have committed murder, or she will be killed herself. She is terrified by Jupiter, Lord of All, who will ultimately dish out the punishment, but she hasn't acquired the same blood lust that seems to possess all other rats.

3.73
41 ratings3 reviews
5 stars
11 (26%)
4 stars
12 (29%)
3 stars
15 (36%)
2 stars
2 (4%)
1 star
1 (2%)
Displaying 1 - 3 of 3 reviews
Matthew Hodge
593 reviews21 followers
May 27, 2018
Reread in 2018: While I was less impressed with this back in 2013 (a year which marked my return to reading Robin Jarvis books), reading it this time round there are more subtleties than I realised. Having said that, they will probably only be appreciated if you have read any of the original Deptford books. So this is probably still the worst place to start on the Jarvis canon. But if you're a fan, this is an intriguing start to a series that never quite went anywhere in particular but had great potential.

Robin Jarvis was my favorite author when I was a young teen and I never quite got around to reading all his works, this one included. Fleabee's Fortune tells the tale of a young ratgirl who lives in the sewers of Deptford but doesn't share the same love of violence and evil as the other rats.

This book is set just before Jarvis' legendary Deptford Mice Trilogy, which I love, but has none of the magic. The main problem is that Fleabee is the only sympathetic character compared with the rats (who have always been two-dimensionally nasty villains, even in the first series) and she's just not interesting enough to carry a whole book on her own.

This lack of lighter characters makes the violence and dark magic (somewhat of a Jarvis trademark) just seem gratuitous. Wanted to like it but it didn't quite work for me, I'm afraid. The book is now out of print, so it may not have worked for many others as well.

Edward Davies
Author 3 books35 followers
November 1, 2016
I love the Deptford Mice books, and this was one I missed when I was younger (I was lucky enough to find it in a second hand book shop). It feels so much shorter than the other books, though it has a similar page count, and it isn't quite as scary as the other books, but it is still an enjoyable read

X
195 reviews
June 17, 2013
I didn't think it was as good or as detailed as the Deptford Mice trilogy, but that might be understandable as (I guess) it was written for younger readers. It was still enjoyable and still very much Jarvis, and the glimpse of some characters from Deptford Mice was interesting!
Displaying 1 - 3 of 3 reviews