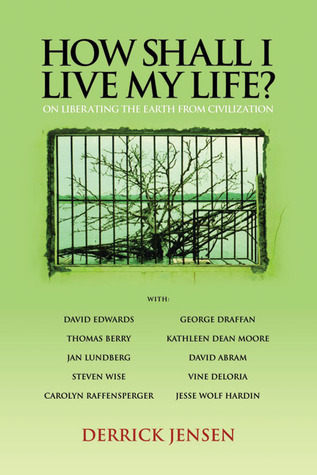 How Shall I Live My Life?: On Liberating the Earth from Civilization

4.28
150 ratings8 reviews
Rate this book
In this collection of interviews, Derrick Jensen discusses the destructive dominant culture with ten people who have devoted their lives to undermining it. Whether it is Carolyn Raffensperger and her radical approach to public health, or Thomas Berry on perceiving the sacred; be it Kathleen Dean Moore reminding us that our bodies are made of mountains, rivers, and sunlight; or Vine Deloria asserting that our dreams tell us more about the world than science ever can, the activists and philosophers interviewed in How Shall I Live My Life? each bravely present a few of the endless forms that resistance can and must take.

59 books631 followers
Derrick Jensen is an American author and environmental activist living in Crescent City, California. He has published several books questioning and critiquing contemporary society and its values, including A Language Older Than Words, The Culture of Make Believe, and Endgame. He holds a B.S. in Mineral Engineering Physics from the Colorado School of Mines and an M.F.A. in Creative Writing from Eastern Washington University. He has also taught creative writing at Pelican Bay State Prison and Eastern Washington University.

4.28
150 ratings8 reviews
5 stars
66 (44%)
4 stars
63 (42%)
3 stars
18 (12%)
2 stars
3 (2%)
1 star
0 (0%)
Displaying 1 - 8 of 8 reviews
Randall Wallace
518 reviews359 followers
December 14, 2020
Thomas Berry says we have “to terminate our present phase of Western Civilization”. Jan Lundberg says, “Automobile exhaust damages crops to the tune of $2 to $4 billion per year just for corn, wheat, soybeans and peanuts.” “100,000 people are displaced every year by highway construction. The U.S. loses 1.5 million acres per year of farmland to urban sprawl: that’s three acres per minute. “The 4.5 mile Cyprus Freeway in Oakland cost $3,500 taxpayers per inch.” To keep our roads in shape would cost $25 billion per year, but the U.S. spends only $13 billion per year on maintenance which assures the roads will deteriorate. The U.S. spends $13 billion annually on widening roads or building new ones. The U.S. and any grownup knows that water and rail are the cheapest way to transport but the U.S. still subsidizes roads and cars to the tune of more than $300 billion per year. Subsidizing major polluters and all fossil fuel burning is the insanity of our government; how do you combat global warming when encouraging only automobiles but not rail and water transport? In the 1960’s, 60% of children walked to school, now that’s down to 10%. Adults walking to work went from 10% to 4%. The average speed for cars in New York now is less than it was with horse and buggies. Now that’s progress.  Jan ends telling us that hemp was outlawed because Dupont could make substitutes. Boy, I’d love the full story on that. Aristotle wrote that women were for men, slaves for their masters, plants made for animals and animals made for man. Yuck. Enslaving is easy if you agree to amorally never take into consideration the interests of the other person/thing you strangely wish to enslave. Did you know that the more international trade there is, the more third world debt there is? Checkout Indonesia’s, Mexico’s, and Brazil’s debt. Adam Smith wrote that “civil government is instituted for the defense of the rich against the poor.” Ben Franklin said, “No European who has tasted the Savage Life can afterwards bear to live in our societies.” “Sooner or later, we will be back in the stone age – it’s inescapable and the only questions will be what’s left of the natural world and will we still know how to feed, clothe and shelter ourselves?” Janine Benyus said, “Nature favors cooperation over competition.”

Why do humans move water (Fiji, Evian) around the world with fossil fuels? Carolyn Raffensperger asks, “What are we going to do with the irony that health care is such a toxic industry?” We send mercury and PVC into hospital incinerators – right at the hospitals – WTF? Vine Deloria says, “Indians experience and relate to a living universe, whereas Western philosophy, especially science, reduces things to objects, whether they are alive or not.” His ancestors would kill a buffalo and spend few days off sitting around a campfire telling stories. This built the community. But “the success of the industrial state is based on having all the citizens be part of the economic machine.” That meant killing off a lot of communities around the world. Natives didn’t see a reason to follow a religion with some obscure higher white bearded deity making promises rather than the universe/spirit/Woniya. Life outside of civilization “is a symphony of mutual respect”. Humans are just the younger brothers of other life-forms. No indigenous group ever had a messiah; the goal wasn’t power it was maturity. Western society’s product is not maturity, “it’s product is youth.” We must all enter into a reciprocal relationship with our land base. Much of the natural world is dying because of western civilization’s profound “great distancing” from the nature. We must reconnect to the land. We must return to seeing the sun come up in a slightly different spot each day. Feeling the rain on your face. The more time you think you have, the more the chance you will put off what you really want to do. If you know you have only a year to live, you will focus on the critical stuff and will be fully awake. Don’t postpone the real work you want to do.

Another great interview book by Derrick, all of his books are great. Cheers.

Colelea
30 reviews6 followers
October 29, 2010
I really enjoyed this book. Particularly the interviews with Carolyn Raffensperger, Kathleen Dean Moore and Jesse Wolf Hardin. My only complaint is that the introduction was less than one full page, and there was no commentary between interviews tying them together. After the last interview was over the book was over and I felt a little like I was left hanging...wanting more. Perhaps that was intentional?
Sage Mystree
16 reviews3 followers
February 14, 2014
I was looking forward to reading Derrick Jensen's words but found this to be a book of interviews which started me off in a slightly disappointed mood.
The conversations were well done, they were really just preaching to the choir here. I found the last three interviews to be the ones that lost spoke to me.
The last three basically reinforced my animistic view of how things are.

Rift Vegan
329 reviews60 followers
March 22, 2009
Jensen does great interviews, and these are mostly people who have been important in his life. But I would much rather read "pure" Derrick Jensen. :)

Andrew
58 reviews2 followers
February 23, 2020
A great sampler jam packed with different ways of thinking with every interviewee focusing on different aspects of the same question. It provided me with a bunch of rabbit holes to dive into!
W M
49 reviews
Read
February 4, 2018
Read all but one interview. I ended up buying a Kathleen Dean Moore's book after reading this one.
Lydia Nguyen
28 reviews
March 13, 2019
Thank you, DJ and all the people interviewed in this book. I appreciated the style of the book because I am interested in interviews and reading this made me feel like I was part of/observing the conversations. You realize how much comes alive when it is a dialogue between people, because so much more can happen when it is not just about the individual.
A really powerful book to read as I deal with my life values and what path to choose as a 'young adult'.