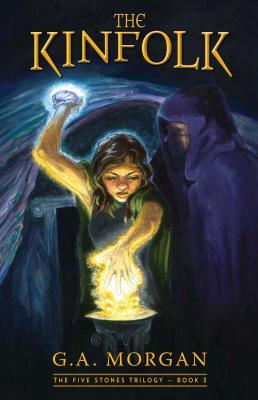 4.42
19 ratings7 reviews
Rate this book
In the dramatic conclusion of The Five Stones Trilogy, Chase, Evelyn, and Knox must gather together disparate forces to save not just Ayda, but their own world. The three young people have returned through the fog to fulfill their promise to the Keepers on the island of Ayda, whose four realms are in turmoil. But in Exor, Dankar's evil forces continue to grow as he corrupts and coerces all in his domain, with the final intent of gaining total control of Ayda so he may take his battle to the world beyond the fog the world of Chase, Evelyn, and Knox. The stones of power that fuel the other three realms and their people weaken as Dankar harnesses more energy. Chase, Evelyn, and Knox each one struggling in a different realm are on a desperate quest to learn more about their own powers and halt what seems to be the inevitable destruction of Ayda. The dramatic reappearance of Chanterelle and two mysterious guests bring answers long sought, but not before everyone on Ayda has been tested to the utmost of their abilities and reunited in the most unexpected of ways. Now, only the Fifth Stone can restore harmony to Ayda and the fate of the world hangs in the balance. G.A. Morgan, who "excels at world-building," (School Library Journal), introduced us to Ayda in The Fog of Forgetting and raised the stakes in Chantarelle. Now she brings the trilogy to a conclusion with a profound investigation of what it takes to continue believing in one another when almost every hope is gone."

4.42
19 ratings7 reviews
5 stars
9 (47%)
4 stars
9 (47%)
3 stars
1 (5%)
2 stars
0 (0%)
1 star
0 (0%)
Displaying 1 - 7 of 7 reviews
Olivia
2,918 reviews61 followers
December 11, 2016
"The Kinfolk" is an action-packed middle grade adventure. This cannot stand-alone but needs context from the first two books in the series. That being said, this is great for fans of the Chronicles of Narnia with the same fast-paced adventurous feel. It's a complex and intricate story, and middle grade fantasy readers will love it! Please note I received an ARC through a goodreads giveaway. All opinions are my own.

Char Benson (Bookish Raider)
210 reviews8 followers
July 20, 2018
It was a great book, don't get me wrong. I just wish that it was a little bit longer than it was.

R.F. Gammon
457 reviews171 followers
December 4, 2016
I started reading this series earlier in the year and fell in love with it from the beginning. Like the characters, I live in Maine. I've always loved fantasy worlds, and so this book was a match made in Heaven.
The conclusion was amazing. This book is a sequel to the first Five Stones book, The Fog of Forgetting, and the second one Chantarelle. The beginning picks up where Chantarelle left off: Chase is living in Varuna, learning the fine art of dreamwalking from Ratha, the Stone Keeper for that realm. Evelyn is leading the citizens of Metria to prepare for war with Exor, and Chase is still in Melor, waiting for the siege to end so that he and his kinfolk can escape to Metria.
But Dankar, the villain of the series, whose objective is to steals the four stones as well as the mythical Fifth Stone, has a mind to raise the stakes in his favor...
I literally could not put this book down as I was reading it. It was a marvelous story and the end left no disappointment while still managing to surprise me. Brava, G.A. Morgan.

Joanne Roach-Evans
Author 5 books4 followers
January 2, 2017
I have never been a reader of fantasy - so it's been really fun for me to find and enjoy this trilogy. They are all so well written. The "The Kinfolk" envelopes the reader immediately, and once again we are immersed in this intriguing world of Ayda. Like the first two books, this one is wrapped in mystery and magic while still feeling grounded in a rich array of sights, sounds, and smells. "The Kinfolk" has depth and complexity that extends beyond the action and plot. A satisfying, exciting read with a nice surprise at the end!

I did have a little trouble remembering who was who but when I finished the book I noticed that there is a guide in the back! I would recommend other readers to check this out first for it is very helpful to refresh one's memory and make the immersion in the book complete.
Jim
Author 10 books38 followers
November 7, 2016
I opened The Kinfolk with great anticipation, because it was another chance to visit the mysterious, fog-shrouded island-world of Ayda, and the young (and not so young) people caught up in its epic battle for survival. G. A. Morgan brought this world thrillingly to life in the first two books of her Five Stones Trilogy, and in The Kinfolk she doesn't disappoint, tying all the complex threads of those volumes together in an action-packed finish without a false step. The Kinfolk is more than just its surface action and fantasy, though. As in the first two volumes, Morgan is working beneath the surface the whole way, infusing the tale with deeper themes having to do with integrity, loyalty and belief in oneself. Highly recommended!
Glen
4,676 reviews48 followers
December 5, 2016
I won an ARC of this novel in a goodreads drawing.

This final book of a trilogy, This book concerns a world of gods and mortals vying for power and glory.

Pretty good world building, but I wish I'd read the other two novels first.