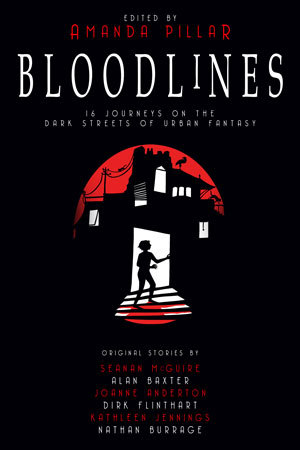 4.05
38 ratings10 reviews
Rate this book
16 journeys on the dark streets of urban fantasy.

42 books88 followers
Amanda Pillar is an USA Today Bestselling author and award-winning editor who lives in Australia, with her husband and two children.

Amanda writes and edits urban fantasy, romance, horror and science fiction. She's the author of the unique Graced series and the paranormal romance adventure series Heaven's Heart, and is the co-author of the Moonlit Hills series. Amanda also is the author of Haunt Me, a standalone book in the Immortal Vices and Virtues series.

She has had over a dozen short stories published, with her fiction appearing in Space and Time Magazine, Kisses by Clockwork, Cranky Ladies of History, the Red Penny Papers, with more to come.

In her day job, she is an archaeologist.

So glad I did. There are 16 original stories of dark urban fantasy based on cities and blood. Many of the authors are well known in Australia, such as Joanne Anderton, Kathleen Jennings and Alan Baxter. All their stories are a fascinating look at a the sayings like "the heart of the city," "the city is in my blood" or "the city is our lifeline" etc.

I loved all the stories - rare in an anthology. Normally I like most and love a few but this time I devoured all of them. The ones that stood out for me among all great stories were:

Dirk Flinthart's story 'In The Blood" tells of a mother's will to cure her son from a life threatening disease and risking both their lives to do it by calling on a fay creature - always a risky thing to do. He captures the parent's desperation beautifully.

Jane Percival's "The mysterious Mr Montague" starts out with "I never eat pork," and there is no way to guess where it's going. Totally delightful.

Finally, 'Unnamed Children" by Joanne Anderton - another story that, as a mother and grandmother, stood out form me. If I tell you more I'll spoil it.

So if you love a bit of horror with flair, something different, great characters and a chill up your spine, this is the anthology for you.

And now for the Claimer: It won the Aurealis Award for Best Anthology.

I'm proud to have contributed a part to this fine home.

I'm limiting myself here to seven stories, all of which really resonated with me. I'm sure other readers will have their own picks. I could mention many more - but it's the whole Disclaimer thing...

For sheer page turning entertainment: Dirk Flinthart's 'In the Blood', Pete Kempshall's 'Azimuth' and Kelly Houlihan's 'The Stone and Sheath' stood out.

Stephanie Gunn's 'The Flowers that Bloom Where Blood Touches Earth' was a beautifully written period piece.

And finally, although I was initially unsure of Seanan McGuire's story, 'Into the Green' has stayed with me.

Liz
Author 13 books45 followers
February 21, 2016
Some amazing and horrifying stories in here, all surrounding ideas about blood. Too many standouts to mention them all, but I have to say Joanne Anderton's "Unnamed Children" will stay with me for a while.

Nathan
Author 10 books15 followers
April 13, 2016
As we all know, book reviews are subjective. So let’s start with some facts.

~ Bloodlines is an anthology of 16 short stories that all feature the use of blood.
~ I am one of the contributing authors, so naturally I want to persuade you to buy a copy for yourself and your significant others.
~ In March 2016, Bloodlines won the Aurealis Award (Australia) for Best Anthology, so when I say it’s a fine collection, at least a handful of judges agree with me.

Now for the subjective section… all of the stories hold their own in this anthology, but quite a few set you on your heels. For me, the four most memorable (everyone does just three) are:

• Joanne Anderton’s haunting creation in “Unnamed Children” is not a place for the faint hearted…or those with low blood pressure
• Kathleen Jennings’ quirky “The Tangled Streets” left me feeling like I had met the protagonist before but had somehow forgotten her history
• Dirk Flinthart’s off-the-cuff “In The Blood” involves a mortal deciding to go toe-to-toe with one of Unseelie, which always ends well, right?
• Stephanie Gunn’s lyrical “The Flowers That Bloom Where Blood Touches Earth” was the one story in this anthology that I simply didn’t want to end

So there you have it. Grab a copy – digital or carbon based – and draw your own conclusions. You won’t regret it.

Riju Ganguly
Author 12 books1,327 followers
April 24, 2021
This collection contained sixteen urban fantay stories. Blood and relations acted as twin strands of the DNA for them. It must be stated that Amanda Pillar has done a stellar job in curating this anthology. Every single story was very competently written. Several succeeded in unsettling even a jaded reader like me.
The book was divided into four sections. Section-wise speaking, my favourites are:
(A) The Fay
1. Seanan McGuire's "Into the Green"— terrific beginning!
2. Nathan Burrage's "The Ties of Blood, Hair and Bone"
3. Dirk Flinthart's "In the Blood"
(B) Bloodlines
4. Alan Baxter's "Old Promise, New Blood"
5. Jane Percival's "The Mysterious Mr Montague"— the creepiest story of the lot!
(C) Criminalities
6. Paul Starkey's "The Tenderness of Monsters"— as usual, a seriously kick ass heroine does the job!
7. Pete Kempshall's "Azimuth"
(D) The City
8. Lyn Thorne-Alder's "Lifeblood of the City"— this could have been the best of the lot, but it ended just when we were about to get a hardboiled climax!
Overall, one of the strongest antologies that I have read in recent times.
Recommended.

Lori
446 reviews11 followers
January 24, 2022
An okay anthology. Maybe a little too widely interpreted by some of the authors for my taste, but I can’t say anything stuck out as bad writing. Some stories just didn’t click for me, especially in the latter half.

Started out very strong, though, and there were certainly some very good stories. Probably worth a read for anyone looking for more from specific authors you know you like.
LaShawn
291 reviews9 followers
February 23, 2022
“Into the Green” by Seanan McGuire

P Pits
50 reviews3 followers
February 24, 2022
I won't lie - I bought this for the Seanan Maguire/ Mira grant story and wasn't disappointed by her cornfields story. Some stories overstepped the 'blood' but for me, but I also discovered a bevy of amazing stories too.
Mark Smith-briggs
Author 6 books3 followers
Read
March 3, 2016
Read for judging.
Displaying 1 - 10 of 10 reviews