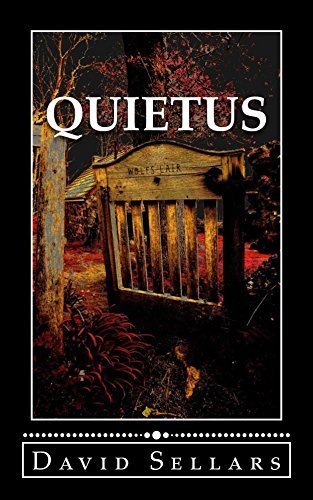 3.90
21 ratings8 reviews
Rate this book
All Nick ever wanted, was to be accepted - to fit into society, to be noticed by his parents, and to fall irrevocably in love.

One out of three wasn't bad. And Sophie: beautiful; passionate; impulsive Sophie; said she loved him too … up until the day she killed herself.

Wracked by grief and desperate to abscond, he moves to Jersey where he meets Carrie in the woods that surround his new home. She challenges Nick to confront his nightmare, and in doing so, risk insanity as he is besieged with deeper, darker, more sinister revelations about the girl he thought he knew.

He can run away from his girlfriend's suicide but can he ever escape Sophie? Or the fact that her death … was his fault?

3 books1 follower
David Sellars was born in Jersey, Channel Islands where he still resides. He was educated locally before attending Nene University College in Northampton. He later studied fiction and playwriting with The Open University and shortly after, completed a Masters Degree in Professional Writing from University College Falmouth. He has two short stories in print and Quietus is his first full-length novel. Genres include dark romance, horror, thrillers, crime, fairy tales, travel and comedy. To write whilst travelling is his constant aspiration. You can find David at: www.davidsellars.com Email: d.sellars75@gmail.com Twitter: @Calm_Seas

The description about them made me like them in a different way, all of them, yes, even Sophie. The author describes not only the physical part, but also their thoughts and how their mind works, and before you even realize it, you have this strong bond with every single one of them.

The personality of Sophie is so well described, that’s it’s almost unbelievable. All the sociopathic characteristics, the whole building of this character is so appealing to read, it makes you want to know what’s wrong and how it can be fixed, and it is told by Nick, by someone who has affection towards this person and it tells both sides of the story, how a person can make you like them and make you hate them at the same time.

The scenes are so realistic, that I felt like I was there. Each chapter is left unfinished, and it only makes you want to read more and more. The whole death-life thing made this book special to me. It made me think way deeper than just how the scene are put, or how was the description of the characters. Maybe I didn’t get the point of the story… I just wonder now. It will bother me for days, that’s for sure. It will haunt me and make me think again and again, deeper and deeper about what was the character’s purpose in this book. Why they were exactly where they were, and why did Nick went to Jersey right after his death in the first place.

All in all, this indeed was a story that has a deep meaning behind her, that reaches into people’s minds and hearts and certainly stays there for a while, like I’m certain it will stay in mine too. It is a story that makes us realize things about life, and then ask ourselves if what we believed in up until now is really true. It made me think how sometimes dead people can influence us, like Carrie influenced Nick, and Nick influenced Sophie. It makes me think how, in fact, it isn’t the dead people that influence us, but just us ourselves.

When you think about it deeper, you’ll realize we don’t change because someone is influencing, but we change because someone woke up some thoughts in us, and it’s us that realize it all and then change. Did Sophie kill herself, or they were actually there, because the whole trip was their imagination. Did they influence her, or it was only Sophie herself? I guess I’ll never answer some of those questions, but I still do think sometimes it’s us ourselves that realize some things, even though Nick and Carrie’s deaths had a purpose too. If there wasn’t a Carrie, there wouldn’t be an imaginary trip to Sophie’s hospital. And if there wasn’t a Nick, we’d never realize that she’s a sociopath.

It is a sad tale, full of intrigue from the start. Nicely written as it gently pulls you in, it doesn’t shout, it’s more subtle than that which I like and makes for a nice change of pace.

It can be a little soppy or romantic at times, or cheesy as I would put it but it manages to stay on the right side of too much for me.

So all starts off well, sad and a little disturbed but well enough and then BAM, 50% in and WTF! There is quite a confusing twist, it was odd and hard to get my head around at first. This book went in a very different direction, not what I thought at all. To say it wasn’t expected is a massive understatement. Can’t say much because it would give the game away.

Once I managed to get my head around what happened it was then almost a race to the end to see what becomes of the characters and it was quite the page turner.

I lovely story in many ways, of friendship and emotional baggage, of love and hate and with a dark underlying tone throughout. A thoroughly good read.

I can’t quite give this 5* I’m not sure why, it just wasn’t quite perfect but it is worth a 4++
4*/5
Lisa Ireland
35 reviews2 followers
September 5, 2020
What an absolutely thrilling read. I started this and thought that the biggest twist was at the beginning, in chapter one, which told of Sophie’s death. I’ve never been so happy to be wrong. Twist after twist unravelled and in such an organic way. Each twist made sense and wasn’t put there for the shock factor.
I started feeling so incredibly sad and sorry for Sophie, but as the chapters went on, I hated her character more and more. She was an evil, manipulative and calculated so and so! Poor Nick, not knowing what really happened and not even realising that he wasn’t even alive anymore. I loved how he and Carrie were connected, and that’s why their ghosts connected and formed their friendship. I thought this was a very clever way to tie everything together.
It was a very quick read, I read all but one chapter in two days, mainly because I just. Couldn’t. Put. It. Down.
I really thoroughly enjoyed this, and very glad I read it! 🙌🏼
This entire review has been hidden because of spoilers.
Kate
1 review
October 16, 2018
An emotionaly-charged, dark and gripping adventure into teenage romance.

I was recommended to read this book, being told “I can’t tell you much about it” so immediately I was curious.
Unknowingly is exactly how you should dive into this gritty but charmingly British story of a confused, grief-stricken yet relateable teenager dealing with the loss of his first love.
I was immersed in this character’s world from the first page and intrigued until the very last! I found myself gasping out loud at some of the stories revelations.

A highly recommended read for fans of the young-adult fantasy genre.
David Sellars
Author 3 books1 follower
November 13, 2016
This is a Young Adult / New Adult / Street Literature genre novel. I believe you will have not have read anything like this before, especially in this genre, and not have encountered an antagonist so utterly malevolent. It’s mysterious, dark, disturbing, unsettling, twisted and sexy, with a few nasty twists along the way. I am aware of at several readers who read it from cover to cover without putting it down and others being reduced to tears whilst enjoying Quietus.

The book is available via Amazon in both paperback and kindle format and various other distribution channels and also at www.davidsellars.com.
Sal Noel
615 reviews4 followers
March 6, 2016
if I'd have read this at 17 I would have loved it. It's raunchy with out-of-the-ordinary characters. It's slightly a victim of its own success in that you read it quickly, skimming to get to the story, but then you don't take in the detail.
However, at my age, ( so why am I still reading YA books?) I need a bit more, so only a 3. I would recommend this to anyone still at school as it does tackle issues I've never come across in a book before. A hearty well done to Mr Sellers.

(5 stars from my younger self)
David Sellars
Author 3 books1 follower
August 15, 2015
This is a Young Adult / New Adult / Street Literature genre novel. I believe you will have not have read anything like this before, especially in this genre, and not have encountered an antagonist so utterly malevolent. It’s mysterious, dark, disturbing, unsettling, twisted and sexy, with a few nasty twists along the way. I am aware of at several readers who read it from cover to cover without putting it down and others being reduced to tears whilst enjoying Quietus.
Freddie DiFranco
Author 2 books6 followers
October 27, 2015
While the premise and general plot of the story were intriguing, I feel that the novel wasn't executed properly for a proper delivery. The characters are strong and compelling, but artificial relationships, glaringly obvious grammatical errors, and the strange and unnecessarily overly dramatic twist at the end watered down what could have been a great read. It was a page-turner, however, and full of drama of the teenage angst variety.
Displaying 1 - 8 of 8 reviews