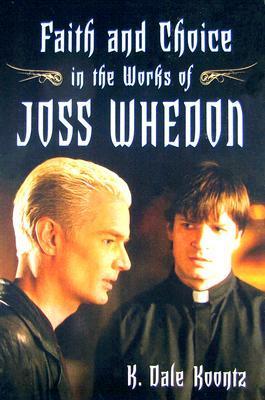 Faith and Choice in the Works of Joss Whedon

3.33
36 ratings4 reviews
Rate this book
Joss Whedon once identified himself as an angry, hard-line atheist who is nevertheless fascinated by the concept of devotion. While organized religion seems to hold no satisfactory answers for Whedon, his dedication to exploring the meanings of faith and belief can be seen in many of the characters he has created for such works as Buffy the Vampire Slayer, Angel, Firefly, Serenity, and Fray. This work examines a variety of Whedon's characters and discusses what can be learned from their struggles and discoveries regarding religion and belief. Part One focuses on the characters' search for purpose, revealing how Dawn, Spike, and Angel attempt to define the meaning of their lives in Buffy the Vampire Slayer and its spin-off, Angel. Part Two focuses on family, examining the unconventional family dynamic in Whedon's comic book miniseries Fray and television series Firefly. Part Three centers around the concept of redemption, using Angel's Doyle, Firefly's Malcolm Reynolds and Shepherd Book, and Buffy's Faith Lehane to examine the characters' search for salvation and their own acceptance of their past actions. Finally, Part Four focuses on the harmful potential of religious zealotry, revealing the negative aspects of absolute belief through Firefly's River and Buffy's Caleb. A primary source guide follows the main text, providing the writer, director, and air date of each television episode, along with publication data for Whedon's print works, including the in-publication Season 8 comic books for Buffy the Vampire Slayer.

3.33
36 ratings4 reviews
5 stars
7 (19%)
4 stars
11 (30%)
3 stars
10 (27%)
2 stars
3 (8%)
1 star
5 (13%)
Displaying 1 - 4 of 4 reviews
Tajsha
13 reviews
May 2, 2009
I was about to type in my review from the notes that I took while reading the book; however, my cup of tea spilled over onto my notes rendering the pages pretty much useless. For now, I will just try to remember some of the things I had written down which means that this will probably come across as really scattered. :-) I am definitely planning to do a more comprehensive review later once I get my copy back.
The way that Koontz uses words is much like the seduction of the vampire creature itself. You may not understand what's going on, but you feel compelled to continue moving forward as if pulled almost helplessly into a world that is not your own.
At first glance, it seemed to be wordy, and I did get lost in the language every now and then. Koontz' ability to use conversational language to keep me on the "right path" helped me to continue turning the pages. Once I became involved with what was going on, I fell under the Koontz spell.
The fact that Koontz uses and analyzes the works of a known and professed atheist to expound about religion was one of the reasons I picked up the book. To write about traditionally dark figures to shine light on long held belief systems was truly remarkable to me. Not only does Koontz delve into the television shows, but also she explores the comic book series that continues where tv Buffy left off. The sources that she used to complete her work are very well documented in her bibliography. Also, her chapter notes are extensive.
What I was reminded of and learned and am constantly learning (no matter how old I get) is that life IS about choices we make. No matter what situation or set of circumstances we are born into, we are faced with various options all the time. We make choices from the options presented that helps determine we do next. Even if the next thing we choose to do is not to choose. Indecision is a choice. By being indecisive, a person can leave him- or herself open to be easily influenced ... into making choices s/he would not make otherwise. How I just got off on that tangent, I have no idea. :-)
I think this book makes you question what your own beliefs - not in the way that you would doubt what those beliefs are. It is more along the lines of allowing you to make sure that you know what you believe and why you believe.
Beyond my waxing philosophical, I liked the book purely because I am a Buffy fan (of the movie and the tv series), an fan of the Angel spinoff, and a long time fan of "stuff" about vampires thanks to the first time I read Bram Stoker's Dracula in junior high... maybe even before that... maybe it goes as far back as my bowls of Count Chocula and watching the Count count on Sesame Street...lol... Let's just say that it has been a long time fascination.
Cass
287 reviews105 followers
January 20, 2015
Disappointing. A few interesting ideas, but too badly-researched, unorganized, and long-winded to be really readable. I read one chapter, skimmed a second (because I'm an optimist) and finally gave up.

Mòrag
37 reviews
March 4, 2018
Yet another book that I'm on the fence about (because that is the story of my life right now). I haven't watched Firefly beyond two episodes. so I stuck to the chapters about Buffy and Angel and, while I usually love studying the metaphors in these TV shows, I felt like this book only scratched the surface and was at times long-winded. But I'm also not that interested in religion, so maybe that played a part....

Shiloh
Author 6 books15 followers
April 18, 2015
While the subject matter is interesting, the execution of the book is lacking. The observations don't go much beyond the surface level and rarely dig into what any of this *means* on a deeper level than "isn't this nifty!" Likewise, there's an odd balance of too much information--particularly when it comes to explaining histories, theoretical approaches, or the finer points of a religious belief; it feels that Koontz doesn't trust the reader to know some of these things and must be informed of them in careful (likely unnecessary) detail, which results in wandering off topic frequently--and not enough, particularly when it comes to summarizing a plot rather than analyzing the characters. There's a few odd comparisons, as well (how did we get to Horton Hatches the Egg, exactly?) and a playful, almost glib tone that ultimately made the book almost unreadable.

Although the author's note at the beginning makes it clear that this isn't the case, this almost read like a dissertation in which the writer has to load in every bit of research and information s/he has, even though much less of it is necessary for a book meant for a mainstream (or even scholarly) audience.