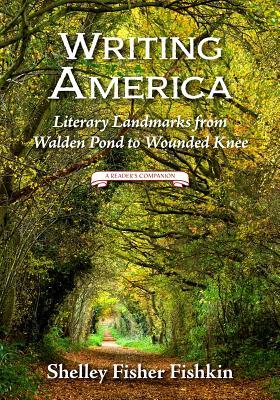 American novelist E.L. Doctorow once observed that literature “endows places with meaning.” Yet, as this wide-ranging new book vividly illustrates, understanding the places that shaped American writers’ lives and their art can provide deep insight into what makes their literature truly meaningful.

Published on the eve of the 50th anniversary of the Historic Preservation Act, Writing America is a unique, passionate, and eclectic series of meditations on literature and history, covering over 150 important National Register historic sites, all pivotal to the stories that make up America, from chapels to battlefields; from plantations to immigration stations; and from theaters to internment camps. The book considers not only the traditional sites for literary tourism, such as Mark Twain’s sumptuous Connecticut home and the peaceful woods surrounding Walden Pond, but also locations that highlight the diversity of American literature, from the New York tenements that spawned Abraham Cahan’s fiction to the Texas pump house that irrigated the fields in which the farm workers central to Gloria Anzaldúa’s poetry picked produce. Rather than just providing a cursory overview of these authors’ achievements, acclaimed literary scholar and cultural historian Shelley Fisher Fishkin offers a deep and personal reflection on how key sites bore witness to the struggles of American writers and inspired their dreams. She probes the global impact of American writers’ innovative art and also examines the distinctive contributions to American culture by American writers who wrote in languages other than English, including Yiddish, Chinese, and Spanish.

Leading readers on an enticing journey across the borders of physical places and imaginative terrains, the book includes over 60 images, and extended excerpts from a variety of literary works. Each chapter ends with resources for further exploration. Writing America reveals the alchemy though which American writers have transformed the world around them into art, changing their world and ours in the process.

46 books6 followers
Shelley Fisher Fishkin is a Professor of English, Joseph S. Atha Professor of Humanities, and Director of American Studies at Stanford University. She is the author, editor or co-editor of over forty books and has published over eighty articles, essays and reviews. Issues of gender figure prominently in her most recent monograph, Feminist Engagements: Forays into American Literature and Culture (Palgrave/Macmillan 2009), which was selected as an "Outstanding Academic Title" by Choice; in Listening to Silences: New Essays in Feminist Criticism, which she co-edited in 1994 (Oxford UP); and People of the Book: Thirty Scholars Reflect on Their Jewish Identity, which she co-edited in 1996, (Wisconsin UP). Gender issues are also central to much of her work on Mark Twain including the Historical Guide to Mark Twain, which she edited in 2002 (Oxford UP) and to her edition of the previously unpublished gender-bending play, "Is He Dead?" A New Comedy by Mark Twain, which she published in 2003 (University of California Press) and helped produce on Broadway in 2007. She has published articles on women writers including Gloria Anzaldúa, Charlotte Perkins Gilman, Erica Jong, Maxine Hong Kingston, and Tillie Olsen, and was a co-founder of Charlotte Perkins Gilman Society, which is still going strong after 20 years. She has served as President of the American Studies Association and is a Founding Editor of the Journal of Transnational American Studies. Current research interests include feminism and American literature; what we can learn from the first four decades of Ms. Magazine; the intersections between public history and literary history; and transnational perspectives on American literature.

3.82
28 ratings6 reviews
5 stars
8 (28%)
4 stars
8 (28%)
3 stars
11 (39%)
2 stars
1 (3%)
1 star
0 (0%)
Displaying 1 - 6 of 6 reviews
Mandy
3,102 reviews260 followers
November 20, 2015
In this wide-ranging and well researched study of American authors and their relationship with the places they live and work in and which have influenced them, the author presents the reader with a fascinating and illuminating guide to literary sites in the US. Writers from Sinclair Lewis to Erica Jong, Walt Whitman to William Faulkner and many many more are included, making this an essential volume to carry around when travelling in the United States. A book to savour and refer to again and again.
Dave
542 reviews7 followers
October 13, 2022
This is quite an amazing book. The author takes famous, historic places and shows how they influenced the literature that came from the people in those places. It is sort of a travelogue endowed with great literature. It involved an enormous amount of research and the author’s massive knowledge of American Literature is amazing.

One aspect that was uncomfortable for me involved the great literature that grew out of the violent abuse of minorities by whites: Blacks, Latinos, Chinese, Japanese, Indigenous peoples. . . A sad commentary on the behavior of European whites and a tribute to the minorities who rose above it, documented it, and made art out of it.

Sam Sattler
966 reviews39 followers
September 21, 2015
Having recently spent a week exploring some of the literary landmarks of Alabama, Mississippi, and Louisiana, I was intrigued by Shelley Fisher Fishkin’s Writing America as soon as I heard about its scheduled publication. The book’s subtitle, Literary Landmarks from Walden Pond to Wounded Knee (A Reader’s Companion), led me to believe that it would serve as a good planning tool for more trips of a similar nature to the one I had just completed. As it turns out, I was right.

As Fishkin puts it in the introduction of Writing America, E.L. Doctorow once said that a novelist “endows places with meaning.” But Fishkin goes further than that when she says, “And if literature endows places with meaning, places can help us better understand how works of literature came to be what they are. Writing America examines intersections between public history and literary history”…And that makes it a perfect companion for those who enjoy extended road trips across America.

My own trip found me visiting cities and small towns that influenced, and were influenced by, such writers as William Faulkner, Harper Lee, Richard Wright, and Tennessee Williams – all of whom are among the most well-known authors this country has produced. Fishkin, however, does not limit herself to the better known of America’s writers. Instead, she gives equal attention to lesser-known writers produced by several minority populations living and thriving in America: African-Americans, Americans of Asian descent, Mexican-Americans, and Native Americans.

Each chapter of Writing America includes a study of several related authors, a few seldom-seen photos of authors and landmarks, excerpts from the work of the various authors being highlighted, a detailed list of historic places relating to the authors in one way or another, and two or three pages worth of references for “further reading.” There are chapters dedicated to Walt Whitman, Henry David Thoreau, Frederick Douglas, Herman Melville, Harriet Beecher Stowe, Paul Laurence Dunbar, and Sinclair Lewis. But there is also a chapter highlighting a number of Native American writers who were highly influenced by what they (or their ancestors) saw and experienced at Wounded Knee, and another on Asian American writers that focuses largely on the impact of the Japanese internment camps of World War II. There is also a full chapter dedicated to the impact that the Harlem neighborhood of New York had on multiple generations of African American writers, and a particularly eye-opening one on the wonderful Mexican-American writers produced along the border that Texas shares with Mexico.

And finally, Writing America finishes with a chapter on how Hollywood, particularly in its heyday, both influenced and used the work of so many of America’s best known writers, writers such as William Faulkner, Raymond Chandler, Nathanial West, Ernest Hemingway, Dashiell Hammett, and Lillian Hellman. Fishkin’s book can certainly be enjoyed by the more sedentary among us, but it is sure to be particularly relished by those who enjoy getting out on the road to visit America’s hidden (and not so hidden) treasures. Writing America is a little treasure chest filled to the brim with literary treasures; it is a fine traveling companion for those with a little time to wander – and to wonder about America’s literary past.

John Benson
1,221 reviews11 followers
July 30, 2016
This is a very ambitious book that tries to look at places that influenced different American authors while giving us a flavor of their writing. Fishkin brings out a wide variety of places and ethnic groups and different authors but I found the chapters somewhat jarring. Each chapter seems to jump from history to a description of the place to different authors from that place and then examples of their writing and then on to another author. It seemed like a hodgepodge of ideas thrown at me and left me often feeling quite confused. The whole theme is a good one, but the structure made it hard to enjoy.
Margaret
219 reviews2 followers
May 15, 2016
What a wonderfully researched volume on American writers and their roots. She criss crosses the country and timelines. So many interesting unearthed facts about authors we thought we knew. Not a quick read but a worthwhile one.
Laura
336 reviews
January 26, 2016
This was not a book to read word for word, but to read the parts of interest to you. It was well researched and written, with photos. I liked learning about the places in books and their authors.
Displaying 1 - 6 of 6 reviews