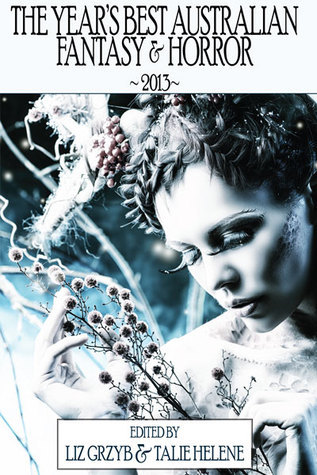 4.38
16 ratings6 reviews
Rate this book
The fourth annual compilation; over 150,000 words of fiction from some of the genre’s best and most awarded writers, together with an annual genre overview and recommended reading list. This is both a book to be read and a valuable reference work. This volume collects twenty eight compelling stories from the finest antipodean writers of fantasy and horror.

4.5* Born and Bread by Kaaron Waaren. Loved this. A dark folk tale about a doughy child. Haunting, clever and fascinating. Superb. One of the best here.

4* Black Swan Event by Margo Lanagan. South American style magical realism in an Australian setting. Not for everyone's taste but I loved it.

3* Hell is Where the Heart Is by Janeen Webb. Standard story.

2* Bowfin Island by Anna Tambour. Tries so hard to be clever that you'll pull your hair out in frustration. A muddled mess. Didn't finish it.

3* A Castle in Toorak by Marion Halligan. Like the Australian locale and feel but like a handful of stories here the ending didn't live up to the premise.

3.5* The Silence of Clockwork by Carol Ryles. Steampunk story with a great ending. An enjoyable read.

3.5* The Raven and her Victory by Tansy Rayner Roberts. Innovative, creepy story. Liked it!

3.5* Flight by Angela Slatter. Good fantasy story of a kidnapped bird-woman. Wanted something more from it but not sure as to precisely what. Still. held its place nicely. Had a strong folk tale feel about it.

2* Disciple of the Torrent by Lee Battersby. Really over the Batavia stories. Done to death. This one was dull and I had to battle my way through it.

2.5*All the Little Ones by Deborah Biancotti. After reading a 12th Planet Collection by Biancotti, (wee worth the read - like a well written, plain clothes X-Men set) I was disappointed by this run of the mill fantasy story.

3*Glasskin by Robert Cook . Clever and original. Don't know whether I actually enjoyed it though.

4* The Ways of the Wyrding by Rowena Cory Daniels. Strong cultural story. Really feel as though you're in a more traditional world.

3* The Sleepover by Terry Dowling. Bunch of people sleep over at an eccentric millionaire's isolated mansion. Premise is straight out of an Agatha Christie novel. Liked most of it but fell into the formulaic horror trap, which by this point I was a little over. Enjoyable but nothing original.

4* After Hours by Thoraiya Dyer. Nice Australian 'wolfish' veterinarian story if you get my drift.

3.5* A Castle in Toorak by Marion Halligan. Great atmosphere and loved the dark Australian locale. Falls apart at the end though.

3* Harry’s Dead Poodle by David Kernot. Nice Australian feel....but another contemporary Australian urban horror. May be harsher on this one as it feels the same as a few others here. Same old, same old.

3.5* Poppies by S. G. Larner. Nice look at power and morality in a setting that feels like the ancient Middle East.

4.5* The Nest by C.S McMullen. This is more like the horror I was after. A weird man has a house with the walls made of ants nests. Fascinating and creepy and ORIGINAL! Had me from start to end.

4.5* By Bone-Light by Juliet Marillier. A retold Baba Yaga story based in urban Australian flats. Brilliant!

4.5* The Oblivion Box by Faith Mudge. An imprisoned girl in a culturally restrictive society, which reflects a fundamentalist Islamic culture. May offend some but this focuses on liberation and civil liberties. Wonderful story.

3.5* Sticks and Stones by Ryan O’Neill. Words literally have power in this horror story. Twist at the end felt clichéd and expected but a good story nevertheless.

2.5* On the Wall by Nikki Rowlands

Anthony Panegyres
Author 17 books26 followers
September 9, 2015
Not a review as such - just thought I'd mention a few stories.

Really like the following:'Black Swan Event' by Margo Lanagan, 'Sticks and Stones' by Ryan O'Neil, 'After Hours' by Thoraiya Dyer, 'Wyrding Women' by Rowena Cory Daniels, 'The Ninety-Two' by Claire McKenna and 'The Nest' by C.S. McMullen.

For me the absolute standouts ,all great stories, are 'Born and Bread' by Kaaron Waaren, 'Almost Beautiful' by Angela Rega, 'The Oblivion Box' by Faith Mudge and 'By Bone Light' by Juliet Marilier.

Plenty of other worthwhile stories too. Spec-fic in Australia is certainly running strong.

Nathan
Author 10 books15 followers
July 5, 2016
Took my time with this one. Overall, 4 stars is probably the fairest rating. I loved Juliet Marillier's story "By Bone-Llght", which was the final story in the anthology. Subtle, perfectly paced and with a hint of magic, both dark and light.
Ticonderoga Publications
56 reviews6 followers
July 20, 2015
Standard Ticonderoga Disclaimer: We published this book because we loved it!