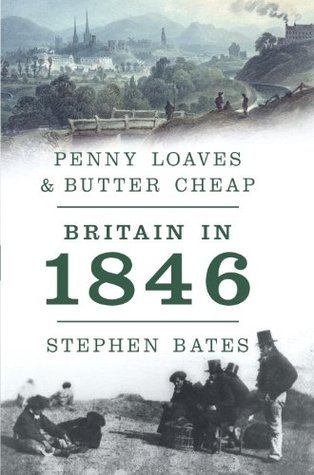 3.15
13 ratings4 reviews
Rate this book
A kaleidoscopic picture of Britain in 1846, a nation on the brink of economic and social change as the Industrial Revolution deepened its impact.

1846 was a pivotal moment in British history. This was the year in which Parliament repealed the Corn Laws, chipping away at the power of landowners and ushering in an age of free trade.

It was also a time of social tension: child labour and slum housing would provide a seed-bed for political discontents that would intensify as the century progressed. In Ireland the human tragedy of the Great Famine was entering its second year.

Stephen Bates describes the events of an extraordinary year for a society in the grip of the Industrial Revolution but also on the cusp of modernity.

36 books4 followers
Stephen Bates has worked as a journalist for the BBC, the Telegraph, the Mail and, for 23 years, as political correspondent at the Guardian. He is the bestselling author of Church at War and God's Own Country.

Penny Loaves and Butter Cheap, Stephen Bate's kaleidoscopic picture of Britain in 1846 is in all good bookshops and available in ebook now.

Susan Bradley
4 reviews2 followers
February 24, 2015
Very enjoyable. I read this book at a slow pace devouring every morsel of information. Couldn't wait to pick it up and read every opportunity I got. It was a real privilege to find such a splendid author explain the significance of this most important time in Britain's history. Packed with goodies I never knew before.
Stephen
408 reviews23 followers
April 10, 2019
Britain in 1846 shared many of the issues that face the UK today. In 1846, the key political question surrounded trade policy and whether or not Britain should embrace the global economy. Society was riven with deep inequality as the benefits of industrialisation failed to be shared around. Politics was influenced by events in Ireland, a matter that still casts a shadow today. The ruling Conservative Party was deeply split over the question of trade and the Prime Minister of the day, Peel, could only get his way by allying with the Official Opposition. We have seen this all before.

In 1846 the nation decided to opt for a policy of running an open economy. The protectionists lost their cause. The economy opened to the world and the benefits of trade flowed in for the following two and a half decades. This inflow of prosperity was the foundation of Victorian greatness. One cannot but think that there is a contemporary parallel here. The EU is an open trading zone, within its own boundaries, but is a closed trading zone to third party countries. Without realising it, the Brexiteers have championed the cause that provided the foundation for much of our current economic prosperity.

It was this growing prosperity that reduced inequality in late Victorian Britain. It is easier to share the cake further if it is a growing cake. There was some disress following the abolition of the Corn Laws, mainly in rural communities, but the consequence of cheaper food was to give urban communities greater disposable income. These growing real incomes were then spent, giving rise to greater prosperity.

The Irish Famine cannot be downplayed. It was a horrible event. One that was the result of deliberate policy. However, we ought not to dwell on Ireland too much because we miht miss the matter of rural depopulation in England and the clearances in the Scottish Highlands. In this respect, the vast movements of people in 1846 rather echo the levels of migration that we see in Europe today. It is also tempting to dwell upon the climate disater of 1846 (the failure of the potato harvest) as a prelude to the impending climate disaster that we face.

A realignment of society was under way in 1846 and this was starting to be reflected in the politics of the day. A similar realignment is under way today between those with a voice and those without one. Strangely enough, in 1846 the Tory rump of the Conservative Party - akin to the Brexiteers today - was given sufficient a shock to recompose itself as an inclusive, 'One Nation' party. It paved the way for the development of the 'Working Class Tory'. If the contemporary Conservative Party splits further, I wonder f that process would be paralleled?

This book has much to recommend it. The writing is fluent and well argued. It doesn't get bogged down at all. The year in question has many direct parallels to today. If that similarity holds good, then we are left with a very optimisitic conclusion. Despite a really bad prospect for Britain in 1846, the measures taken that year laid the foundation for a golden age that lasted well into the twentieth century. If only history could repeat itself.

Mark
39 reviews
July 5, 2018
As the title says, this book is about Britain in 1846, back when Britain referred to the entirety of the British Isles, rather than just being the United Kingdom of Great Britain and Northern Island.
The activity level of a population 1/3 what it is today is remarkable, viewed from this distance in time.

With natural disaster close at hand - the Irish Famine - and political turmoil between free traders and protectionists - the repeal of the Corn Laws - this book has a lot to cover. And that is possibly the problem; with so many interconnecting things going on, the author is cross-referencing within the book, and it feels at times as though the book is repeating itself.

Nonetheless, and interesting read, with many topics touched on that may inspire the reader to seek out more focussed books, to keep on reading around and through this point in history.
Stephen Goldenberg
Author 3 books47 followers
April 6, 2016
A very readable piece of popular history highlighting a key period in English history when many of the changes which we're taking place presaged our modern political and economic system. Most of it concentrates on the key role of Sir Robert Peel. One thing that hasn't changed is that self-interest seems the rule for most politicians. Also, if you don't know much about it, it's a horrific insight into the heartless attitudes at the time to the Irish potato famine and explains a lot about Irish attitudes since to the E nglish, particularly the landowners.
Displaying 1 - 4 of 4 reviews